Study Shows How Small Groups Lead to the Emergence of Leaders 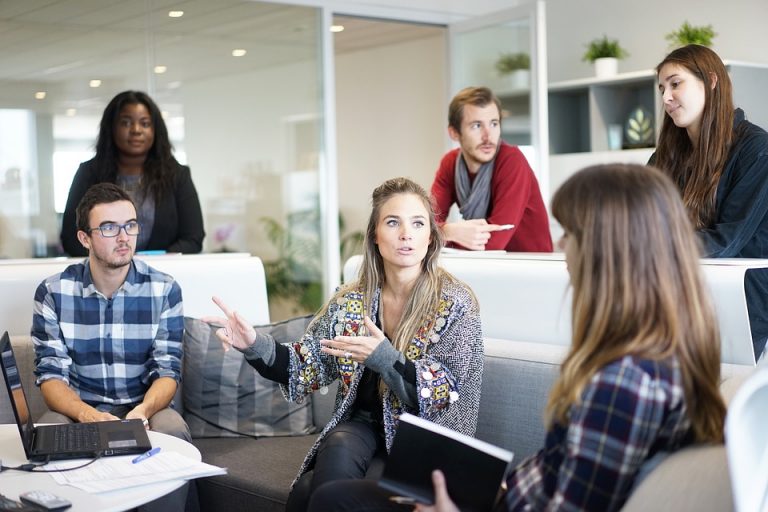 A Team, led by NYU Tandon Professor Maurizio Porfiri, finds patterns in how people interact in small groups that leads to the emergence of leaders. (Image: via Pixabay)

While the “wisdom of the crowd” shapes the behavior of large groups of people, less is known about small-group dynamics and how individuals interact to make decisions, particularly when it comes to the emergence of leaders, a key area of inquiry in organizational research. The phenomenon is critical to arriving at an understanding of social networks of all kinds.

How leaders arise from small groups

Now, researchers at the NYU Tandon School of Engineering have cracked the code on how leaders arise from small groups of people over time. The work is detailed in a study Social Information and Spontaneous Emergence of Leaders in Human Groups, published in The Royal Society Interface.

To conduct the research, the team convened several groups of five volunteers each to participate in a cognitive test arranged in 10 consecutive rounds. The task involved estimating the number of dots displayed for just half a second on a large screen. In each round, participants were asked to choose one from multiple answers using a custom-made clicker, without verbally communicating with one another.

Because the dots were visible for only an instant, group members, lacking the time to count them, had to venture a guess. However, the experiments were structured so that participants could alter their answers based on the answers of others in their group: Once all participants had chosen their initial answers, the screen — viewable by all — displayed the current answers of all members along with their past performance in selecting correct responses.

Participants then had a 10-second window in which to change their responses based on those of the others in the group. The researchers, analyzing how participant responses evolved over the course of the experiment, found that individuals did not choose the simple majority rule, as posited by the wisdom of crowds. Rather, they dynamically decided who to follow in making decisions, based on how well each group member performed over time.

Based on their observations, the researchers inferred a dynamic evolution of the network of interaction, in which participants were nodes and the links were the consequences of social influence. For example, the investigators generated a link from one participant to another if the first had changed his or her answer to that of the second. The speed at which the network grew increased over the course of each of the rounds. Porfiri said:

“Individuals used social information more and more over time, and the more accurate the information, the more influence it had over participants’ choices.

“Therefore, the relationship between participants’ performance and their social influence was reinforced over time, resulting in the emergence of group leaders.”

To discern the influence of social networks within evolving group dynamics, the investigators noted that:

Participants were more likely to be copied by others if their performances were good, even if their answers differed from those of the group majority.

Nakayama, the lead author, explained that the behavior of small groups is strikingly different than that of much larger gatherings of people, saying:

“Where a large crowd would adopt a simple majority rule, with an increase in the accuracy of performance over repeated interactions, individuals rely more on social than personal information and as a consequence; good performers would emerge as group leaders, exerting a stronger influence on others over time.”

Porfiri noted that while most studies of social connections are based on static networks, defined by fixed established relationships, his team’s research looked at functional networks based on constantly changing connections. Porfiri said:

“Historically, people have looked at social networks as equivalent to an anatomical network based on static ties between people. We are putting forward the idea that in small groups, networks evolve in time based on actions.”

He also said: that these time-based actions are like networks in the brain, where physically distant neurons forge connections toward a specific function, adding:

“Our approach is analogous to learning about neural circuits based on how they function in the brain, rather than how they are anatomically connected.”

Provided by: New York University Tandon School of Engineering [Note: Materials may be edited for content and length.]