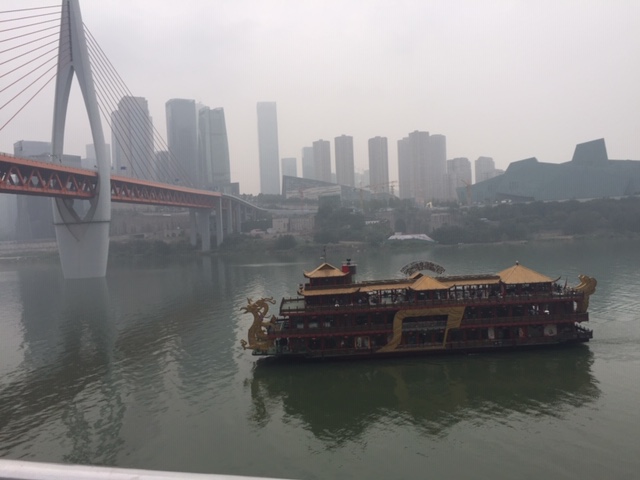 The taxi driver who, without the benefit of earbuds or even a car radio, drove us from the airport into the city of Chongqing sang quietly and unselfconsciously for most of the trip.

As we sped along one of China’s newish superhighways, his song brought to my mind the two brothers who competed by night to serenade Cuicui (“Jade Green”), the old ferryman’s granddaughter in Shen Congwen’s ageless tale Border Town (translated by Jeffrey C. Kinkley, Harper Collins ebooks).

The young brothers, following a local courtship practice, vied to woo CuiCui “through the customary exchange of amorous verses, sung by each in turn across the mountain valley.”  They went “up into the bamboo grove on the bluffs across the creek to sing passionate songs during the day and tender ones in the moonlight, like a nightingale singing his throat out until he spits blood! “

Set in Shen’s riverside hometown, about 200 miles from Chongqing, his novel immortalizes the people and folk culture of neighboring west Hunan, where the author grew up in the 1920s. Back then, warlords ruled the region and China barely existed as a unified nation-state.

Shen’s works, banned by the Communist Party from 1949 to 1979, were eventually revived. I read them in translation on my first stay in China, when I worked in Shanghai in the early 1980s. By 1988, Shen was on track to get the Nobel Prize for Literature when he died, just a few months before its presentation.

When a friend and I visited Chongqing recently to see the Yangtze River, eat the piquant Sichuan cuisine, and make a pilgrimage to the ancient Dazu Shike rock carvings (a UNESCO World Heritage site), it was evident that China and its people, rustic and urban, had been transformed in the years since my discovery of Border Town.

Even the majestic Yangtze itself had been changed by the world’s largest hydropower project, the Three Gorges Dam.  In central Chongqing, the Three Gorges Museum chronicles the building of this massive dam, as well as the city’s history as a wartime capital and target of sustained bombardment during the Sino-Japanese war (1937-1945).

Some experts believe that the biodiversity Shen so carefully described in Border Town has been wrecked by this $24-billion project. It displaced 1.3 million people and has been tied to landslides, greater earthquake risks, drought, and the loss of fish and other species.  A 2008 article in Scientific American called it an “environmental catastrophe.” Given such sobering realities, quaint touches like our singing cab driver felt all the more precious and evocative.

And when it comes to trying to speak Chinese with local taxi drivers, a little knowledge can be dangerous. Just asking to be taken to the Hilton Chongqing can lead to misunderstandings. As proud as I secretly felt of my intermediate-level Mandarin, I also sensed that my slowly stammered Chinese syllables must sound as crude and baffling to native speakers as the chatter of a small child.

I’d learned this lesson in Shanghai, where we stayed at the Hongqiao Hilton — known locally as the “Shanghai Hongqiao Yuanyi Xierdun Jiudian.” By the time we got to Chongqing, home to three Hilton-affiliated hotels, I knew to ask for “Chongqing Liang Yu Kou Xierdun Fandian.” (For an out-of-practice foreigner, this is really quite a mouthful.)

Cab and bus drivers also played a memorable part during our trip to Dazu Shike, west of Chongqing. Its magnificent 7th-century statuaries are said to represent a blending of Buddhist, Taoist, and Confucian beliefs.  It could take visitors an entire month to see all 50,000 statues unearthed in this area, but we were able to catch a public bus on our day trip to the main viewing site.

The carving began around A.D. 650 during the Tang Dynasty, in caves and rock reliefs on the steep hillsides still draped in bamboo and other dense vegetation.  In the 12th century, a Buddhist monk named Zhao Shifeng spent seven decades working on the elaborate sculptures. We viewed them surrounded by draping bamboo groves and other dense vegetation. This setting made me recall lush natural descriptions from Border Town:  “In the stunning verdure of the emerald bamboo groves on the mountains, yellow finches, bamboo finches, and cuckoos sang in turn.

“Mountains covered with slender bamboo. …in all seasons such a deep emerald color as to transfix the eye. Households near the water appeared among peach and apricot blossoms.”

As depicted in the statuaries, the meaning of the serene countenances, gilded hands, and fearsome warriors mostly went over our heads. We were thankful for the companionship of a small party of tourists from Taiwan. Calm and refined, they prayed fervently in certain places.  Later, when our trip through the grounds and adjoining Buddhist temple had ended, they helped guide us back to the bus stop.

Even they were baffled, though, by the antics of our paunchy, talkative driver. For some reason, about 40 minutes outside Dazu, he pulled over and left us off in a litter-strewn field next to the highway.  Maybe he simply wanted to dodge the daily horror of Chongqing’s rush hour traffic. Our Taiwanese friends discussed the matter with him at great length, but ended up just as mystified as we were.

Eventually, a large and nearly full commuter bus stopped to pick us up. Amid the smell of vomit, blaring movies, and a motley crew of riders, we crept through bumper-to-bumper traffic for hours, making our way back to the megacity. The driver let us off in the dark somewhere in Liang Yu Kou — the area where our Hilton was located. Later in the week, we heard news reports that 13 people died when a fight between the bus driver and passenger resulted in a 164-foot plunge from Chongqing’s Second Wenzhou Bridge into the Yangtze River.

In an alley behind our hotel, dinner was a peppery bowl of noodles at one of the countless open-air eateries. It set us back a mere yuan or two. The waitress insisted on returning our tip, as firmly as the old ferryman in Border Town declined gratuities from his customers.

“When someone grabbed a few coins and threw them down on the boat desk, the ferryman always picked them up, one by one, and pressed them back into the hands of the giver, saying in a stern, almost quarrelsome voice: “I’m paid for my work!’”

Some regional customs haven’t changed, apparently, and for these remaining touches of authenticity, I am thankful.

Susan Ruel, Ph.D., a journalist and former academic, first worked in China in the 1980s. She lives in New York and has published several books and many articles for the Associated Press, the United Nations, Down Beat, Time Inc., and others.)