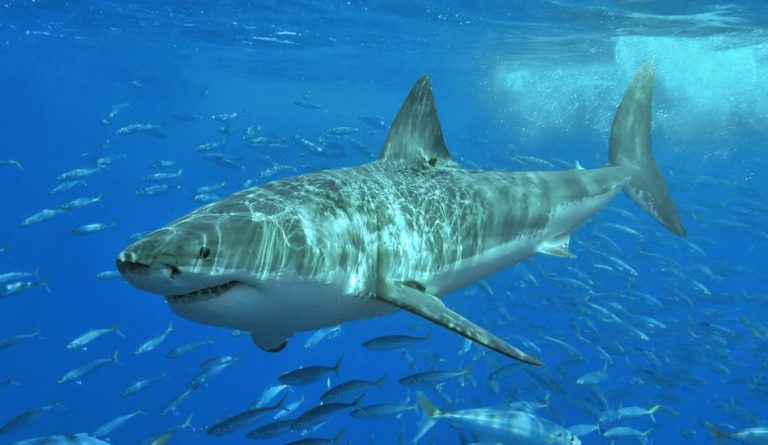 The great white shark's genome has been decoded. (Image: via wikipedia)

The great white shark is one of the most majestic creatures on the planet and has been an apex predator in the waters for a very long time. Recently, a team of scientists from Nova Southeastern University (NSU) cracked the genome of the shark, revealing some amazing secrets that might one day help fight even cancer.

The shark’s genome was almost one and a half times that of a human genome. The team found several instances of molecular adaptation in numerous genes that have played a key role in maintaining genome stability in sharks. Genome stability refers to the various defense mechanisms that fight against DNA damage accumulation in a species, thereby preserving the genome integrity. Adaptation sequences were found to be deeply tied to DNA damage response, DNA repair, and DNA damage tolerance in the shark.

The discovery of genome stability in these creatures is pretty important since it indicates how sharks were able to evolve large bodies and live a long life. Theoretically, the bigger an animal’s body, the higher it should be at risk of cancer. However, studies have shown that this is not true across all species. Some big creatures are less susceptible to cancer, as they have superior cancer-fighting abilities.

Researchers also discovered that genes tied to some fundamental pathways in wound healing in sharks involved positive selection and gene content enrichment. The adaptations suggest that these genes may be the reason behind a shark’s ability to rapidly heal its wounds.

“Genome instability is a very important issue in many serious human diseases; now, we find that nature has developed clever strategies to maintain the stability of genomes in these large-bodied, long-lived sharks… There’s still tons to be learned from these evolutionary marvels, including information that will potentially be useful to fight cancer and age-related diseases, and improve wound healing treatments in humans, as we uncover how these animals do it,” Mahmood Shivji, who co-led the study, said in a statement (Nova).

There are an estimated 500 species of sharks on the planet. The great white shark is the only species that has had its genome sequenced in its entirety. The researchers hope that their study will push people to be more involved in the conservation of these creatures in a world that butchers close to 100 million sharks each year.

A great white shark’s mouth is usually equipped with around 300 triangular, sharp teeth that are arranged in seven rows. Any animal that gets in its mouth is guaranteed to be torn apart. However, they are not known to target human beings.

Estimates of great whites attacking humans put the figure at around 5-10 per year. Most of the fear surrounding these sharks is basically the creation of movies and pop culture that have painted the creature as some mindless, bloodthirsty beast. As long as you stay out of their way, they won’t be coming after you.

When a great white shark gives birth, it does so in batches of 2 to 10. The mother shark shows scanty care for pups. In fact, she might even eat them, if hungry. Baby sharks typically measure 4 to 5 feet in length. As soon as they are born, they will swim away from their mother and start hunting small creatures.