The Legend of Taiwan’s Banping Mountain 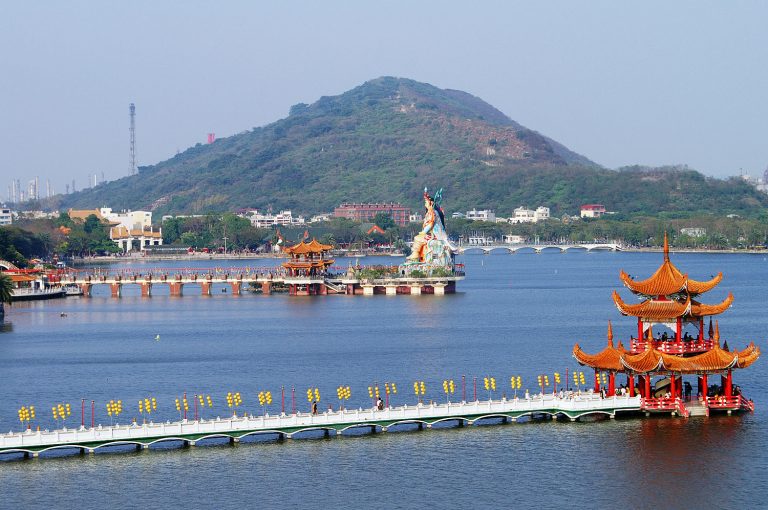 A peculiar mountain, the Banping Mountain sits at the junction of Zuoying District and Nanzi District of Kaohsiung City in Taiwan. One side of the mountain ridge is so flat that it looks like it has been cut off with a knife. The residents say it resembles a painted screen, so everyone calls it the “Half Screen Mountain.” The mountain has a legend surrounding its origin. It involves Han Zhongli, one of The Eight Immortals in ancient Chinese legends, and his use of delicious food to test humanity.

According to this legend, Han Zhongli sought to select a virtuous person as his apprentice, so he decided to descend from Heaven to the secular world. He traveled to the beautiful Zuoying District and disguised himself as a dumpling hawker in order to test human beings and find a suitable apprentice in the crowd.

He lifted his small hand-held fan and waved it toward the mountain, and the side of the mountain was cut off. The falling stones transformed into countless dumplings. Then he took these “dumplings” to the street market and put an advertisement on a signboard to solicit business. It read: “Delicious dumplings! One for one cent, two for two cents, and three for free!”

Hearing that they didn’t need to pay for eating three dumplings, the crowds rushed to Han’s booth and ate three dumplings without hesitation. Some greedy people even ate several dumplings for free and didn’t leave until they were full.

It remained like this for several days, and Han felt disappointed. Just then, a young man came and said he would like to order one dumpling. Han asked him with curiosity: “Young man, why don’t you eat three dumplings for free like the others?” The young man replied: “I know I could, but you have to bear a heavy burden to come here to do business, and I can’t let you run a losing business. So I decided to use the money to buy a dumpling.”

After listening to these words, Han Zhongli thought: “I finally found my ideal apprentice.” Then he told the young man his true identity and his intention to accept him as a disciple while advising the young man on his decision. The young man replied that this matter must be approved by his parents.

This further confirmed Han Zhongli’s thoughts: “This young man is not only kind and upright, but also filial to his parents. He is definitely the best choice for a disciple.” They set out to the young man’s home and asked for the consent of his parents. After consent was granted, Han left with the young man.

The two came back to the street and met the greedy customers. Seeing Han Zhongli’s true form and realizing he was a deity, they all came forward to apologize. Han said to them with a smile: “Look at the mountain behind you. Hasn’t a lot of it been cut off? Those missing stones are the dumplings in everyone’s stomach. This is a lesson for those of you who love to take advantage of others.” Suddenly, the listener’s stomachs felt painful and they tried to spit out the dumplings. Meanwhile, Han left the mortal world with his recruited apprentice and returned to Heaven.