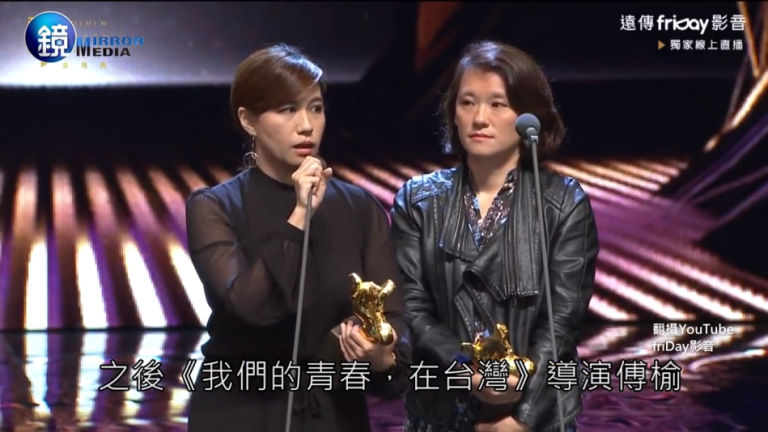 At the 55th Golden Horse Awards in Taipei last November, the winner of the best documentary called for the independence of Taiwan on live TV. (Image: Screenshot / YouTube)

At the 55th Golden Horse Awards in Taipei last November, the winner of the best documentary called for the independence of Taiwan on live TV. Three months later, public polls suggest that the Taiwanese have no desire to unify with China despite consistent threats from Beijing.

The demand for Taiwan’s independence was made by filmmaker Fu Yue during her acceptance speech where she expressed it as “my biggest wish as a Taiwanese.” She had tears in her eyes the entire time. The incident ruffled many feathers in Beijing and the Chinese regime quickly cut off the live TV broadcast and online streams of the event.

Several Chinese participants at the award ceremony left Taiwan after Fu’s speech, with some even canceling their promotional appearances. Tu Men, an actor from mainland China, was dismissive of Fu’s speech and referred to the island nation as “Taiwan, China.” This was condemned in strong words by the Taiwanese President Tsai Ing-wen.

“We have never accepted the phrase “Taiwan, China,” and we never will accept this phrase, Taiwan is simply Taiwan… I am proud of yesterday’s Golden Horse Awards, which highlights the fact that Taiwan is different from China, and our freedom and diversity is why this is a land where artistic creations can be free,” she said in response (The Guardian).

Following the incident at the Golden Horse Awards, the Publicity Department of the Chinese Communist Party is said to have released a memo stating that Chinese citizens invited to the next awards event will be barred from attending it. However, the Executive Committee of the Golden Horse Awards stated that they had not received any information about a potential Chinese boycott for the next event.

Just like Fu Yue, the vast majority of Taiwanese have absolutely zero interest in being under Beijing’s control. In January 2019, the Taiwan National Security Survey (TNSS) conducted a study on the public’s stand on the matter.

“Support for immediate reunification finds no market in Taiwan — it remains below 3 percent. Support for immediate independence also remains in single digits. Rather, most Taiwanese (roughly 33 percent) consistently favor the status quo and prefer to determine Taiwan’s future at some later date,” according to The National Interest.

The defiant existence of Taiwan has been a thorn in Beijing’s side. Even Chinese President Xi Jinping recently admitted that he would order a military attack on the island if that was the only path to unification. Several Chinese military officials have publicly accepted the possibility of violence against Taiwan.

In an interview with Taiwanese media, PLA Major General Wang Weixing claimed that the reason Taiwanese don’t want to accept Chinese rule under the ‘one country, two systems’ framework was due to their ‘misunderstanding’ about communism and China.

“First, the long-term anti-communist education of the Taiwanese authorities; second, the bad influence of the separatist ideology of Taiwan independence; third, the unwillingness to reunify and willingly evade and reject any plans for reunification; fourth, some media are misguided; fifth, the dissemination of information about ‘one country, two systems’ is insufficient to allow the Taiwanese people to understand it,” he said in a statement (Taiwan News).

However, a closer look into the “one country, two systems” proposal is enough to understand that the people of Taiwan are right in their skepticism of the Chinese communist regime. Beijing absorbed Hong Kong in 1997 under the same framework and the city is now being stripped of its liberal environment and turned into another one of the communist-controlled Chinese cities. If China can’t tolerate the democracy and free speech of Hong Kong, the Taiwanese have no reason to believe that Beijing will allow the freedoms of their society.