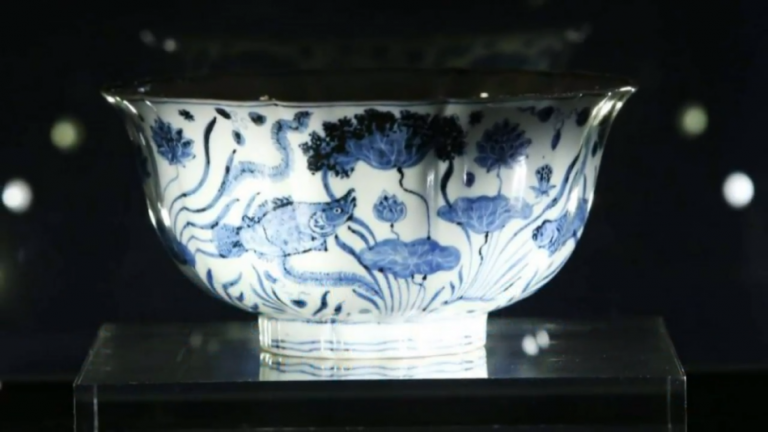 One day, his friend, Li Shih came over to chat and the porcelain bowl was mentioned. (Image: Screenshot via YouTube)

Chinese porcelain has been a valued object throughout history and was a major export item of China in the past. Surprisingly, the largest private collection of Chinese porcelain is not in China, but in Europe. Known as the Meiyintang Collection, it consists of nearly 2,000 pieces of porcelain and is currently under the control of a Swiss businessman, Stephen Zuellig, and the heirs of his deceased brother.

In Mandarin, Meiyintang means “Hall among Rosebeds.” The collection was created over a period of 50 years by Stephen and his brother Gilbert. Since they were born in Manila, the brothers always held a deep fascination for the culture of the Far East. They started collecting Chinese porcelain during the latter part of the 1950s. And over the next few decades, the two brothers managed to acquire close to 2,000 pieces of some of the most valuable ancient Chinese porcelain in the world.

After researcher Regina Krahl published a scholarly presentation on the collection, Meiyintang soon gained prestige among specialists and collectors of Chinese ceramics. The collection has been exhibited in some of the biggest museums in the world, including the British Museum in London, Musee Guimet in Paris, and Sporting d’Hiver in Monte Carlo.

Gilbert’s part of the Chinese porcelain collection consisted of more than 1,600 pieces and was transferred to the Meiyintang Foundation in 2003. It was made accessible to the public when loaned under a long-term agreement to the Rietberg Museum in Zurich. During 2011-2012, a small part of the Meiyintang Collection was sold off in Hong Kong by Sotheby’s. The auction saw huge interest from Chinese buyers.

After the communist regime took over, any attachment to ancient Chinese culture was repressed. But with the country gaining economic prosperity, wealthy Chinese not only wanted to reconnect with their heritage, but also wanted to let the art world know that they, too, possess deep pockets. Around US$121 million worth of pieces were on auction.

“Demand for Chinese artworks has driven up prices, which in turn is drawing fresh treasures onto the market. The traffic is almost entirely one way. Chinese fine art from America and Europe is moving back to China in the biggest migration of culture since European masterpieces traveled inexorably westward to America in the 19th century. Buyers prize rarity, quality, and provenance above all,” according to The Economist.

It was introduced to the West through the Silk Road routes and quickly became a much-in-demand product. During the Song Dynasty (A.D. 960 to A.D. 1279), the export of Chinese porcelain became robust thanks to prosperous maritime trade.

Creating porcelain wares involves numerous procedures. Raw materials like glass, ash, bone, quartz, and alabaster have to be crushed, cleaned, and mixed in precise quantities in order to shape them into various objects. These are then subjected to bisque-firing, then glazed, and given a final firing before they are ready to be sold. In ancient times, the imperial family would have the first right to buy the best porcelain manufactured in the region.

Today, antique Chinese porcelain is very much sought-after by art collectors. In fact, a piece of antique porcelain was sold off for US$84,000,000, a record yet to be broken.