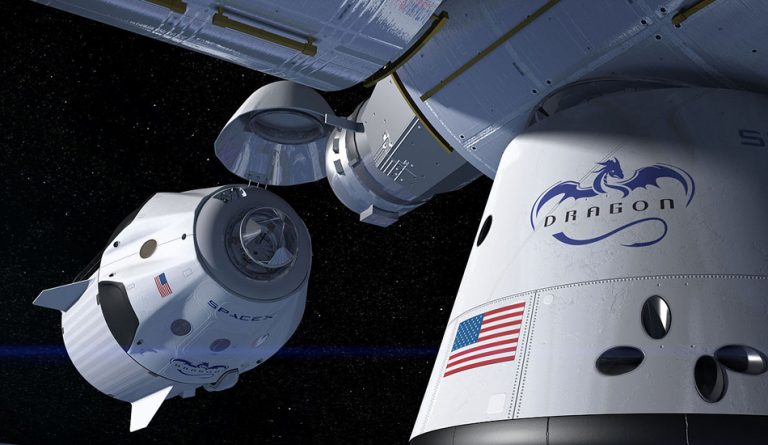 SpaceX made history early this month when its spaceship, the Crew Dragon, successfully docked with the International Space Station. (Image: wikimedia / CC0 1.0)

Elon Musk’s SpaceX made history early this month when its spaceship, the Crew Dragon, successfully docked with the International Space Station (ISS). By doing so, SpaceX has become the first company in the world to achieve this feat for a commercial craft designed to take people to space.

Before docking, SpaceX conducted several safety checks to ensure the process would go smoothly and be accident-free. The 14,000-lb capsule then locked itself to Node 2 of the ISS. Since this was an unmanned flight, there were no astronauts aboard the Crew Dragon.

The capsule just contained about 400 pounds of cargo and a female crash test dummy called “Ripley.” The crew inside the ISS, the 3-member Expedition 58, opened the hatch, floated inside the Crew Dragon, and held a greeting ceremony.

“On behalf of my crew, I would like to congratulate the United States of America and the NASA team for this very significant event: the launch and docking of the SpaceX Crew Dragon spaceship… It’s a historic step … on our way of human beings [moving] beyond low-Earth orbit to the Moon, and Mars, and the future,” Oleg Kononenko, Expedition 58 commander and Russian crew member, said in a statement (Science Alert).

Six days later, the Crew Dragon returned to Earth, splashing down in the Atlantic Ocean. It was lifted out of the water using a crane. The capsule’s protective shell was weathered due to the intense heat it faced while reentering the Earth’s atmosphere.

With its successful docking and comeback, Crew Dragon has proven that it can take astronauts to space soon, which is something that NASA is definitely looking forward to. Currently, NASA relies on the Russian space agency’s Soyuz rocket to take astronauts to the ISS. This costs about US$80 million per seat.

“A new generation of space flight starts now with the arrival of @SpaceX ’s Crew Dragon to the @Space_Station. Congratulations to all for this historic achievement getting us closer to flying American Astronauts on American rockets,” NASA administrator Jim Bridenstine said in a tweet.

SpaceX will now analyze data from the trip to tweak Crew Dragon and make it ready for its upcoming manned mission. Veteran astronauts Doug Hurley and Bob Behnken will be on board the capsule, which could fly into space as early as July this year.

While the success of Crew Dragon will infuse SpaceX with enthusiasm, the company has bigger plans to explore in the coming years, specifically its Mars program. Musk has stated that once SpaceX starts regular trips to Mars, the price of a ticket will be just around a few hundred thousand dollars.

“It gets to the point where almost anyone, if they saved up and this was their goal, could buy a ticket and move to Mars — and given that Mars would have a labor shortage for a long time, jobs would not be in short supply,” he said in a statement (CNBC).

SpaceX will be starting its “hop tests” for the Mars spacecraft sometime this year. By 2020, tests on the booster as well as high-altitude flights will commence. If everything goes according to schedule, SpaceX will send a ship to Mars in 2022. The craft will place mining, life support, and power infrastructure on the red planet so that people arriving in future missions have an easier time setting up a colony.