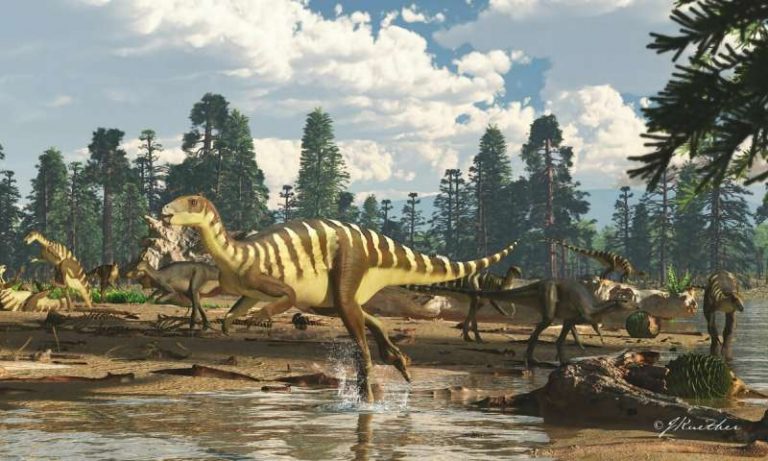 Artist's impression of a Galleonosaurus dorisae herd on a riverbank in the Australian-Antarctic rift valley during the Early Cretaceous, 125 million years ago. The newly-named, wallaby-sized herbivorous dinosaur was identified from five fossilized upper jaws in 125-million-year-old rocks from the Cretaceous period of Victoria, southeastern Australia. (Image: copyright James Kuether)

A new wallaby-sized herbivorous dinosaur has been identified from five fossilized upper jaws in 125 million-year-old rocks from the Cretaceous period of Victoria, southeastern Australia. Reported in the Journal of Paleontology, the new dinosaur is named Galleonosaurus dorisae, and is the first dinosaur named from the Gippsland region of Australia in 16 years.

According to Dr. Matthew Herne, a Postdoctoral Fellow at the University of New England, NSW, and lead author of the new study:

“The jaws of Galleonosaurus dorisae include young to mature individuals — the first time an age range has been identified from the jaws of an Australian dinosaur.”

“These small dinosaurs would have been agile runners on their powerful hind legs.”

The name Galleonosaurus dorisae refers to the shape of the upper jaw, resembling the upturned hull of a sailing ship called a galleon, and also honors the work of Dr. Doris Seegets-Villiers, who produced her Ph.D. thesis on the paleontology of the locality where the fossils were discovered.

Galleonosaurus is the fifth small ornithopod genus named from Victoria, which according to Dr. Herne:

“Confirms that on a global scale, the diversity of these small-bodied dinosaurs had been unusually high in the ancient rift valley that once extended between the spreading continents of Australia and Antarctica.”

Small ornithopods appear to have thrived on the vast forested floodplain within the ancient rift valley. At the time of Galleonosaurus, sediments were shed from a 4,000-km-long massif of large, actively erupting volcanoes that once existed along the eastern margin of the Australian continent.

Some of these sediments were carried westward by large rivers into the Australian-Antarctic rift valley where they formed deep sedimentary basins. However, as these sediments washed down the rivers of the rift valley, the bones of dinosaurs, such as Galleonosaurus and other vertebrates, along with the logs of fallen trees, became mixed in. According to Dr. Herne:

“This land has now vanished, but as ‘time-travellers’ we get snapshots of this remarkable world via the rocks and fossils exposed along the coast of Victoria.”

The new article shows that Galleonosaurus dorisae is a close relative of Diluvicursor pickeringi, another small ornithopod named by Dr. Herne and his team in 2018 from excavations along the Otway coast to the west of the Gippsland region. Dr. Herne explained:

“The jaws of Galleonosaurus and the partial skeleton of Diluvicursor were similarly buried in volcanic sediments on the floor of deep powerful rivers.

“However, Galleonosaurus is about 12 million years older than Diluvicursor, showing that the evolutionary history of dinosaurs in the Australian-Antarctic rift had been lengthy.”

The jaws of Galleonosaurus were discovered by volunteers of the Dinosaur Dreaming project during excavations near the town of Inverloch. The most complete jaw and the key specimen carrying the name Galleonosaurus dorisae was discovered in 2008 by the seasoned fossil hunter Gerrit (Gerry) Kool, from the nearby town of Wonthaggi.

Gerry and his wife Lesley have been instrumental in organizing the Dinosaur Dreaming excavations along the Victorian coast for 25 years. Prior to the discovery of Galleonosaurus dorisae, the only other ornithopod known from the Gippsland region was Qantassaurus intrepidus, named in 1999. However, Qantassaurus had a shorter more robust snout than that of Galleonosaurus, explained Dr. Herne, adding:

“We consider that these two, similarly-sized dinosaurs fed on different plant types, which would have allowed them to coexist.”

The new study reveals that the ornithopods from Victoria are closely related to those from Patagonia in Argentina. Dr Herne said:

“We are steadily building a picture of terrestrial dinosaur interchange between the shifting Gondwanan continents of Australia, South America, and Antarctica during the Cretaceous period.”

These are exciting times for dinosaur research, explained Dr. Herne:

“Using advanced techniques, such as 3D micro-CT scanning and printing, new anatomical information is being revealed on dinosaurs such as Galleonosaurus dorisae.

“These techniques are helping us to delve deeper into the mysterious world of dinosaur ecology — what they ate, how they moved and how they coexisted — and their evolutionary relationships with dinosaurs from other continents.”

Provided by: Cambridge University Press [Note: Materials may be edited for content and length.]