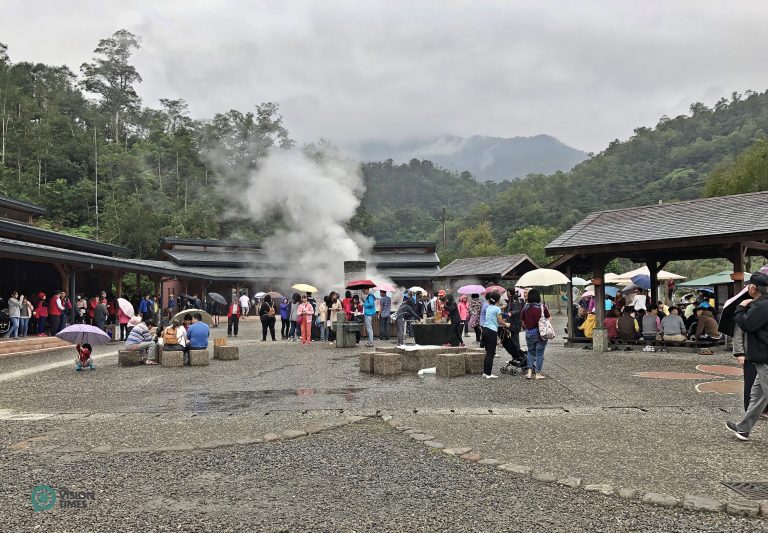 Located at an upstream valley of the Qingshui River at Datong Township in northern Taiwan’s Yilan County (宜蘭縣), Qingshui Geothermal Park (清水地熱公園) is a popular destination for fun and enjoyment. It was formerly a workstation of Taiwan’s state-run Chinese Petroleum Corporation (CPC), which started to drill exploratory wells in the vicinity in 1976. Since the geothermal resources in this area are very unique, it thus gradually became a famous tourist attraction.

Covering an area of about 2.5 hectares (6.2 acres), the Qingshui Geothermal Park was renovated by the Yilan County Government in 2011 and again in 2018. It was reopened in November 2018, with three cooking pools, two foot baths, a rest area, and a parking area that can accommodate about 250 cars.

The water in the pools and foot baths comes from a former CPC well. Its temperature ranges from 95° to 104°C (203° to 219°F), which is hot enough to cook food, and the most commonly seen foods cooked in the cooking pools include corn, eggs, taros, sweet potatoes, water bamboo (筊白筍), chicken, and soup.

The cooking facilities are well designed, which allow many visitors to stand around the pools to cook their food at the same time. Visitors can buy the food ingredients and rent bamboo baskets in a shop inside the park. It is great to experience the fun of boiling food in the steaming hot spring water.

Visitors can also relax an adjacent relaxing foot spa where they can soak their legs in pools with a temperature of about 40°Celsius (104°F).

There are also benches and stools around wooden and concrete tables to allow visitors to savor the goodness of the food cooked in the hot spring water.

The fourth phase of the Qingshui Geothermal Park is currently under construction, and the project is expected to be completed in April 2019, further improving the facility as a destination for those who enjoy dipping in hot springs.

Moreover, with the abundant geothermal resources in the area, the nation’s first geothermal power plant was constructed in 1981 near the Qingshui River, making Taiwan the 14th nation in the world that produces electricity from geothermal energy. Due to the problems with water pipes, the operation of the plant was suspended in 1993, but it resumed operation in 2014.

Additionally, the state-owned Taiwan Power Company (Taipower) and CPC announced a joint plan in November 2018 to further explore geothermal energy in Yilan County. A total of six exploratory wells are expected to be drilled by June 2021.