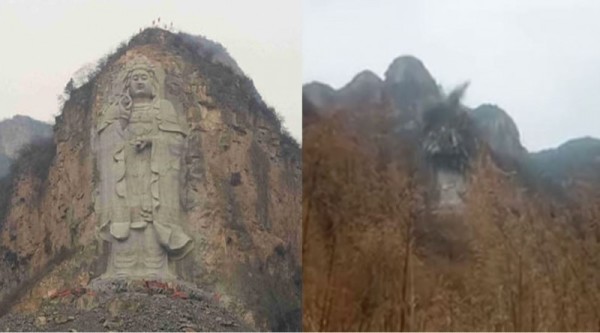 Before and after images of the statue's destruction taken from the video posted on YouTube by Bitter Winter magazine. (Image: Screenshot via YouTube)

On February 2, a statue of the Boddhisatva Guanyin that was carved into a cliff in Hebei Province was detonated and destroyed. The Buddhist statue took five years to complete and cost approximately 17 million RMB to build, but in just a few moments the statue, which represented traditional Chinese culture, was turned into rubble, causing indignation in the local population.

According to China’s Religious Liberty and Human Rights magazine Bitter Winter, the 58-meter high statue, known as the “Dripping-Water Guanyin” located at the top of the cliff behind Huang’an Temple, was said to be the world’s tallest cliff-carved Buddhist statue. During festivals, tens of thousands of people, including tourists, visited the Buddhist statue for sightseeing and worshipping, and some came to redeem their vows. The attention given to this Buddhist statue aroused the Chinese government’s attention, as religious beliefs are something the Chinese Communist Party (CCP) cannot tolerate. On January 30, the authorities sent a team to carry out the demolition operation.

How the Buddhist statue was destroyed

An unidentified worker involved in the undertaking revealed how the blasting plan was designed. They ordered workers to use an excavator to remove the base of the Buddhist statue, drilled a hole about 20 meters deep into the mountain behind the Buddhist statue, then filled it with explosives. The preparation work only took two days. On February 2 after a tremendous blast, the upper half of the Buddhist statue was blown into pieces and in just a few seconds it was destroyed, leaving a pile of ruins.

Since last year, the CCP has been using the pretext of dealing with the commercialization of religion to crack down on religious believers. An insider disclosed that the demolition of the Guanyin statue was ordered directly by the Party Central Committee because “too many people worship and praise Buddha and the government prohibits people from worshiping Buddha statues.”

Bitter Winter also reported that on December 1, 2018, the Dragon King palace hall at the Zhongnan Mountain Guanyin Buddhist Monastery in the Chang’an District of Shaanxi’s Xi’an City was completely destroyed under the guise of being an illegal building.

A devotee said that the Dragon King Palace Hall had been approved by the local government. This shows that the Chinese government does impose unwarranted charges on religious sites and forcibly demolishes them. According to this devotee, when he opposed the demolition, he was put under house arrest. Based on the information provided, construction on the palace hall began in May 2009. Since the foundation of the temple was on a rocky mountain, it required significant manual labor to level it out. It took nine years to build at a cost of 30 million RMB.

While the Dragon King Palace Hall was being demolished, another two large outdoor Guanyin statues from the Iron Buddhist Temple in Xixiang County, under the jurisdiction of Hanzhong City in Shaanxi, were forcibly demolished within a period of two months. An insider revealed that a businessman who had contributed to the construction of the Iron Buddhist Temple proposed to donate 2 million RMB to protect the temple’s famous “Three-Faced Guanyin” statue, but that proposal was rejected by the local government because the directive to demolish came from the Central Government.

These incidents show the CCP’s intense crackdown on large religious statues and is said to be the most severe in scenic areas.