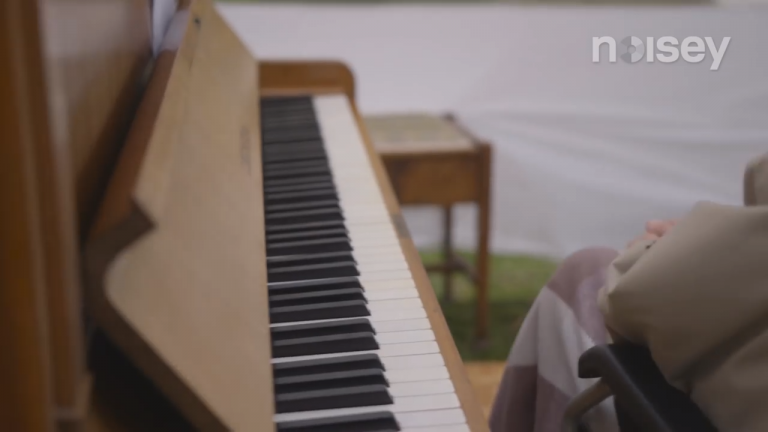 Music has the power to enrich the brain and the human spirit. (Image: Screenshot / YouTube)

When a person grows old, memories begin to fade and this will have a huge impact on the mind. Edward Hardy, a British World War II veteran, was admitted to the Mellifont Abbey Nursing Home in Somerset, England, suffering with dementia. Unfortunately, he was separated from his wife of 70 years, Betty. Being alone in the nursing home, he retreated into depression and silence. No one could communicate with him. Everyone felt a bit discouraged. No one suspected that Edward still had a superb talent, just waiting to be unlocked through the help of one kind young man.

The nursing home employed a young man named Sam Kinsella, who served as the coordinator of activities. He often heard Edward shouting for help and banging on the floor, but when Sam would go to assist him, he realized Edward didn’t even know he had been shouting.

One day, Sam told Edward he lived in Somerset because he was part of a band. This prompted Edward to mention that he had played the piano for years. Sharing the connection of both being musicians led to an instant friendship between them.

Edward had been a pianist for the first half of his life, but no one at the nursing home was aware of it. According to SWNS TV, during World War II, Edward worked for a music company in both Malaysia and India (The Musical Corp). After returning to the UK, he founded his own jazz band called the Sam Hardy Trio. The group toured around the world and eventually, Edward saved enough money to buy a house with his wife Betty, and ended his travels as a touring musician. When he entered the nursing home, he had not talked about the piano for 25 years.

Sam decided to try and have Edward reconnect with the music, hoping to improve his mentality. He asked Edward’s nephew to send in a keyboard. Reuniting with his beloved keyboard after 25 years led to something completely unexpected.

Although Edward’s mental state had been deteriorating, he still remembered the musical notes of the old days. When he touched the black and white keyboard with both hands, he hesitated for a moment. Then, cheerful notes jumped out from his fingertips under his skillful technique. Sam recalled: “It’s really amazing. Even though he has dementia, he could play any piece of music I named.”

However, the most moving thing was with his wife, Betty. Edward’s music evoked the good memories for both of them, and Betty reminisced about the years when they traveled together. Since then, Edward has resumed playing the piano every day. But Sam decided to take it further. He posted an ad inviting local jazz musicians to come to the nursing home to accompany Edward.

The ad was a success and brought a total of 80 musicians. Amazingly, the other two members of the Sam Hardy Trio saw the advertisement and came to meet him. This mighty orchestra held a live concert at the nursing home.

Sam found that when Edward and the band’s old members reunited, the excitement in Edward’s eyes was simply indescribable. Edward and Betty also were happy during their interactions, which moved Sam and the elderly residents of the home.

Finally, Sam made this special experience into a video that was released on YouTube’s VICE channel. He wants more people to know that music can enrich the spirit and wanted to pass on this moving story to everyone.