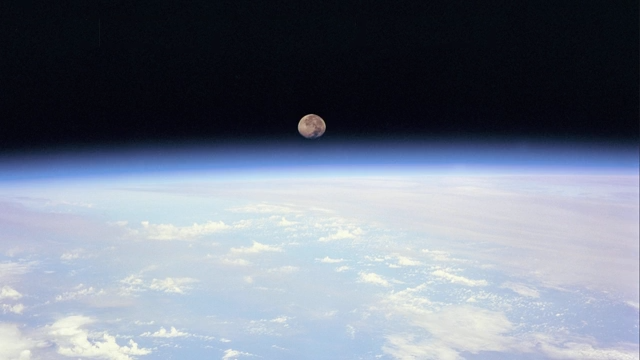 NASA has discovered “moving water” on the lunar surface. The agency’s Lunar Reconnaissance Orbiter (LRO) probe, which has been orbiting the Moon since 2009, has identified water molecules being absorbed and released from lunar dust all through the day depending on surface temperature. While this does not mean that there are rivers flowing on our natural satellite, the discovery does give hope that we will soon be able to extract and use water on the Moon.

Moving water on the Moon

“This is an important new result about lunar water, a hot topic as our nation’s space program returns to a focus on lunar exploration… We recently converted the LAMP’s light collection mode to measure reflected signals on the lunar dayside with more precision, allowing us to track more accurately where the water is and how much is present,” Dr. Kurt Retherford, the principal investigator of the LRO’s Lyman Alpha Mapping Project (LAMP), said to Express.

At the beginning of the day, water remains stuck to the lunar surface. As noon arrives and temperatures rise, some of the water molecules rise up and move around until they reach a colder region where they then fall back to the surface.

Alternate explanations suggest that instead of lunar water, the probe might have picked up water forming from hydroxide molecules supplied by the sun. Hydroxide molecules basically have an oxygen atom attached to a hydrogen atom. However, researchers are positive that what the instrument picked up was actually water molecules from the Moon itself.

Though NASA has long suspected that there was water on the Moon, it was only in 2009 that its Lunar Crater Observation and Sensing Satellite (LCROSS) confirmed these suspicions. It discovered large beds of water ice at the satellite’s South Pole. And now, 10 years later, the space agency has made another important discovery by identifying the behavior of water on the lunar surface.

“These results aid in understanding the lunar water cycle and will ultimately help us learn about accessibility of water that can be used by humans in future missions to the Moon,” Amanda Hendrix, a senior scientist at the Planetary Science Institute, said in a statement (Gizmodo).

Advantage of water on the Moon

Being able to extract water from the Moon’s surface is an extremely important objective for space agencies worldwide. For one, this would enable us to actually establish colonies on the Moon by ensuring a continuous supply of water for drinking, bathing, cooking, raising crops, and a variety of other purposes.

Water can also be turned into rocket propellant. Hydrogen and oxygen, the two basic components of a water molecule, are the materials used to power rockets. As such, lunar water would allow future spacecraft exploring other planets to refuel right on the Moon rather than needing to return to Earth to do so.

“The idea would be to get a sort of supply chain started outside of Earth for certain products — in particular, for water as a propellant — so that it could be much easier to navigate to space from one body to another,” Julie Brisset, a research associate at the Florida Space Institute, said to The Verge.

According to NASA estimates, the agency will need around 100 metric tons of propellant annually for future missions that would leave from the Moon. This is estimated to cost around US$3.5 billion every year. By setting up a system to convert water into propellant on the lunar surface, such exorbitant costs could easily be contained.