The Manifestation of CCP Ideology by Chinese Students in Western Universities 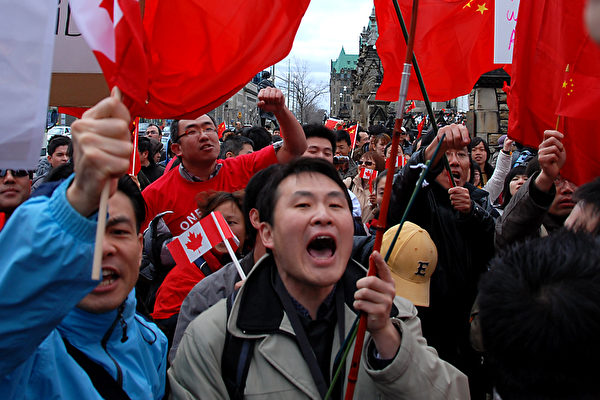 The phenomenon of the 'angry youth' has spread rapidly overseas, with Chinese students causing disturbances at universities in Canada.(Image via The Epoch Times)

Recently, there have been several incidents of Chinese students causing disturbances in Canada. These Chinese students verbally abused on-campus Tibetans and Uyghurs because they hold values that differ from the Chinese Communist Party (CCP). Some analysts commented that the CCP’s ideology is being spread through Chinese students in Western countries, bringing the phenomenon of the “angry youth” with it.

At the University of Toronto Scarborough, Chemi Lhamo, a Tibetan female student, was elected as the president of the student union. This triggered a reaction in Chinese students who referred to Ramo as an “agitator for Tibetan independence” and slandered her on social media.

Another incident occurred during a lecture to expose the Xinjiang re-education camps held recently in McMaster University in Canada. A Chinese student suddenly yelled and swore at the speaker, Rukiye Turdush, the former Canadian Uyghur Council President. Some Chinese students discussed how to create a disturbance during the lecture in a WeChat group beforehand and reported it to the Chinese consulate.

Wang Ye (pseudonym), who is studying in Canada, told reporters that education by the CCP has led to such a result.

“The country is now engaged in the promotion of nationalism. It is hard to separate this logic out. Many Chinese have not really received any education on racial equality, and they are constantly stigmatizing the affirmative movement. Most of them, even living abroad, are taking information from Chinese media and holding preconceived negative perspectives.”

These two incidents are similar to the experiences of Wang Qianyuan, a Chinese student at Duke University, and Yang Shuping, a Chinese student at the University of Maryland. Wang Qianyuan tried to act as a mediator in a confrontation between the Chinese government and Tibetan independence demonstrators, while Yang Shuping criticized China’s air quality in public. As a result, they have both been constrained by a large number of “angry youths” just because they have done or expressed views that were different from the Chinese government’s.

Being brainwashed, Chinese students continue to spread the deeply ingrained ideology of the Chinese Communist Party even after leaving China. The Chinese student version of the “angry youth” continues to spread on foreign campuses.

Sheng Xue, vice chairman of the Democratic China Front, commented on the way Chinese students treated Tibetan student Lamo and Uyghur human rights activist Toduhi: “These practices have fermented widely and will certainly cause increasing resentment and resistance towards the entire Chinese community. Chinese students will take great responsibility for the future situation of Chinese in a democratic country.”

She believes that Chinese students are actually a group to take pity on since they are also monitored by the Chinese government when they study abroad.

“Chinese officials have quite a number of specific methods and strategies in regard to monitoring Chinese students who have no human rights protections granted by local communities during their studies in a democratic country.”

When asked, Wang Qianyuan told reporters that liberal international students are now in a very difficult situation. He believes that CCP officials and many students caught up in the “angry youth” phenomenon are completely discrediting the entire Chinese community.

Wang lamented that the world’s political situation is now improving while China is moving further and further away from the rest of the world.