How China’s BRI Threatens the State of the World 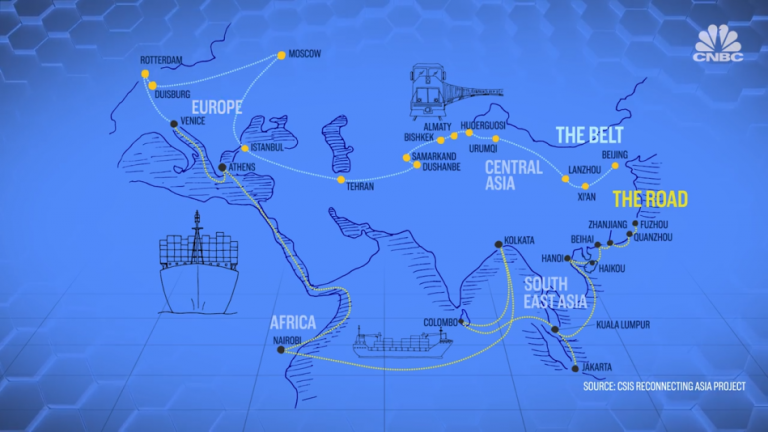 China's Belt and Road Initiative promises to establish a new silk route that will usher in prosperity to the nations attached to the project.(Image: Screenshot / YouTube)

China’s Belt and Road Initiative (BRI) initiative promises to establish a new silk route that will usher in prosperity to the nations attached to the project. However, given that the country is ruled by an authoritarian communist regime, doubts over the real intentions of the BRI have been raised from all corners of the world ever since the project was introduced. As far as the U.S. is concerned, the BRI is a major threat to the country’s economic and military dominance, which is reason enough for America to be wary of it.

At present, the United States is the No. 1 economy in the world, commanding close to a quarter of the world’s GDP. In contrast, China’s GDP share stands at around 15 percent. The worrying fact is that over the past few decades, the U.S. share has been consistently falling. In the late 1960s, America’s share of global GDP was around 38 percent. Much of this loss in economic power can be attributed to the rise of China.

Through unfair trade practices that involve hobbling foreign companies so they cannot compete on an equal footing in the country and through ensuring that wages remain low, China essentially became the manufacturing capital of the world, shifting production out of the U.S. As a consequence, America’s manufacturing industry crumbled, while China’s economy got stronger.

With the BRI, Beijing is in a position to inflict further pain on the U.S. Since China has built up massive cash reserves, it is able to fund infrastructure projects in developing nations by offering attractive loan terms to these countries. Once they take the offer, these nations essentially become indebted to China and will have to implement economic policies that favor Chinese products and services.

China’s cheap labor costs and huge cash reserves basically guarantee that the country continuously becomes an important player in almost every industry imaginable. Even major Western nations, like Italy, seem to be favoring Chinese investments, overlooking potential security threats. As such, the trend of declining American GDP will be accelerated by the BRI as more countries sign up to be a part of it.

As America’s share of global GDP declines, so will its political and military clout. The BRI will increase the Chinese military’s overseas presence. A case in point is Djibouti, which is hugely in debt to China. This allowed Beijing to set up its first ever overseas military base in the African country in 2017, giving the Chinese military a strong presence in the Indian Ocean and the Horn of Africa.

Various reports suggest that China will be able to counter the U.S. military in the South China Sea in less than a decade. As China sets up military bases overseas, America’s military might in these regions will be challenged and may even be diminished. “The security and military implications of BRI (Belt And Road Initiative) will largely result from perceptions of a China-led economic order in Asia, whereby Beijing’s potential inducements and punishments will lead countries to limit their security cooperation with the United States and be less willing to push back on Chinese assertiveness,” according to the Council on Foreign Relations.

With China dethroning America in economic and military leadership, the current political structure of the world based on democratic ideals will be at risk. More countries may start adopting China’s authoritarian model of governance to establish “order” in their societies, severely restricting free speech and forcing people to blindly follow a repressive government.