Young People Stand Up Across the World Against Climate Change 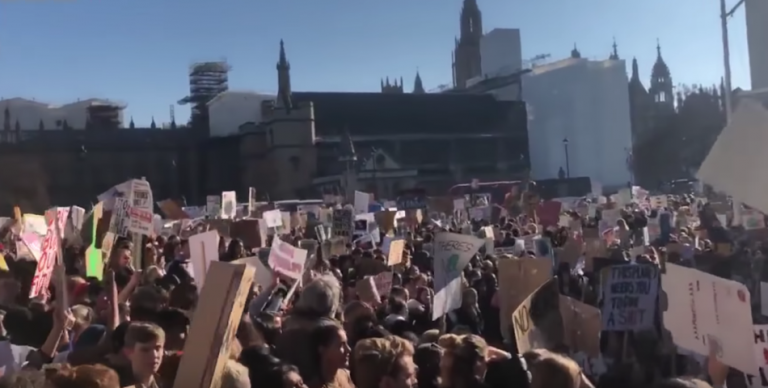 Thousands of school students across the world have been skipping classes over the past weeks. (Image: YouTube/Screenshot)

Thousands of school students across the world have been skipping classes over the past weeks, angry at the governments. Their demand? They want politicians to act on climate change. The protests were sparked by a 16-year-old Swedish girl, Greta Thunberg, who camped outside her country’s parliament last August and accused the lawmakers of not honoring climate change agreements made under the Paris climate accord.

“Young people make up more than half of the global population. Our generation grew up with the climate crisis and we will have to deal with it for the rest of our lives. Despite that fact, most of us are not included in the local and global decision-making process. We are the voiceless future of humanity. We will no longer accept this injustice. We demand justice for all past, current and future victims of the climate crisis, and so we are rising up,” the student climate activists wrote in an open letter in The Guardian.

Students from the UK, U.S., France, Ireland, Uganda, Germany, Poland, Japan, India, and many other countries already skipped a day in class in support of the protests. A final worldwide student strike was held on Friday, March 15. The date was chosen since Greta has been striking every Friday to protest the lack of action against climate change. This eventually gave rise to the #FridaysForFuture hashtag.

Youth activism on climate is certainly not new; for example, youth groups in Europe, the U.S., and other countries have been attending the international climate negotiations for more than 20 years, and in 2005, they formed the International Youth Climate Movement to coordinate their efforts.

This movement has attracted even more support and Greta has become an international figure, speaking in various TV shows and even at the United Nations Climate Change Conference in Katowice, Poland, in December 2018. More than 700 scientists have pledged their support for the school strikes. Though most people agree with Greta’s demands for stricter laws on climate change, not everyone is happy with students ditching their classes.

“A spokesperson for British Prime Minister Theresa May said that skipping school means wasting lesson time that teachers have carefully prepared — time that would be crucial for education which will help solve the climate issue in the long run,” according to VOA News. German Chancellor Angela Merkel had suggested that the strikes were motivated by foreign powers. However, she was soon forced to retract her statements after facing intense criticism.

Greta predicted that students won’t let up their climate protests. “There is a crisis in front of us that we have to live with, that we will have to live with for all our lives, our children, our grandchildren, and all future generations,” she said. “We are on strike because we do want a future.”