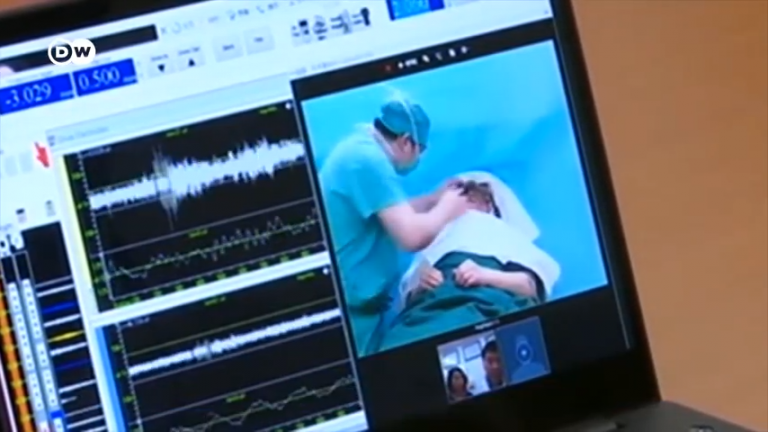 A surgeon from China, Dr. Ling Zhipei, has conducted the world’s first remote brain surgery over a 5G network on a patient located more than a thousand miles away. Dr. Ling is a surgeon at the People’s Liberation Army General Hospital in Beijing.

“I take turns working in Beijing and Hainan, and the operation took place during my Hainan rotation. A patient with Parkinson’s in Beijing needed surgery and couldn’t fly to Hainan… The 5G network has solved problems like video lag and remote control delay experienced under the 4G network, ensuring a nearly real-time operation. And you barely feel that the patient is 3,000 kilometers [1,800 miles] away,” Dr. Ling said in a statement (Geek).

The doctor used surgical robots to insert a deep brain stimulation implant inside the patient’s brain. The device is like a pacemaker for the brain, helping those suffering from Parkinson’s to control their tremors. The operation was done over 5G Internet with no video lag, with the entire procedure taking about three hours. As per local reports, the patient is feeling well after surgery and has not complained of any side effects.

“We hope in the future we can take advantage of the 5G network to enable more hospitals to carry out remote surgery. In this way, more patients will be able to receive treatment at their local hospitals”, the doctor said in a video statement (Daily Mail).

A week before the brain surgery, China carried out a liver surgery through 5G. And in January this year, the world’s first 5G remote surgery was performed in the country on a laboratory animal. The reason China is leading in telesurgery via 5G is simple — it has already established the widest 5G networks in the world. As such, China has the advantage of being a leader in any 5G-related technology.

The 5G network through which Dr. Ling conducted the surgery was powered by Huawei and China Mobile. Huawei is already embroiled in a huge global boycott since the company’s products are said to be a potential security threat to other nations.

Huawei is expected to highlight the success of 5G surgeries in its future PR efforts to show the Western nations “what they’re missing” by banning its products. U.S. telecom companies are reportedly in talks with 5G equipment suppliers like Nokia and Ericsson to launch 5G services in the country as quickly as possible.

The reason why 5G is billed as a revolutionary technology is because of its high mobile Internet speeds. While 4G provides speeds of up to 100Mbps, 5G speeds can go up to 20Gbps.

“The 5G network is expected to be 1000x faster than the 4G network that is currently available. It will also have the capacity to work on lower frequencies, which means you can communicate with family and friends in places where current network speed and bandwidth would find difficult. The waves of the 5G network will be transmitted through the troposphere as opposed to the stratosphere in which 4G waves are carried. So it will possess faster speed, data capacity, and low latency that will open up tons of endless possibilities,” according to Tech Technik.

Due to low latency, services like real-time 4K online gaming through the cloud will become a reality. According to reports by Qualcomm, at least 90 percent of 5G users will enjoy download speeds of 100Mbps. Streaming 120fps 8K videos with 10-bit color will also be possible with 5G. However, there might be potential health risks in using 5G.