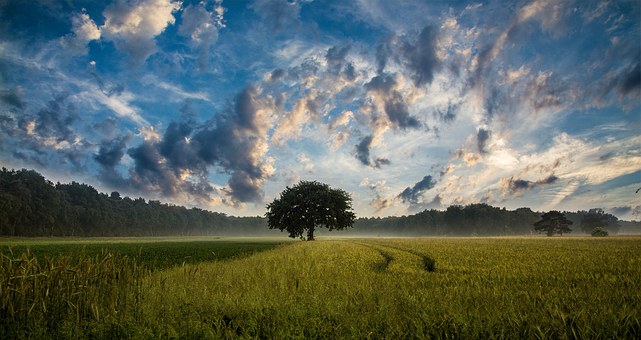 A new study has revealed how clouds are modifying the warming created by human-caused climate change in some parts of the world. (Image: via pixabay / CC0 1.0)

Led by Swansea University’s Tree Ring Research Group, researchers from Sweden, Finland, and Norway analyzed information contained in the rings of ancient pine trees from northern Scandinavia to reveal how clouds have reduced the impact of natural phases of warmth in the past. Clouds are doing so again now to moderate the warming caused by anthropogenic climate change.

Even though northern Scandinavia should be strongly affected by global warming, the area has experienced little summer warming over recent decades — in stark contrast to the hemispheric trend of warming temperatures, which is strongly linked to rising greenhouse gas emissions. According to the study, temperature changes have been accompanied by an increase in cloudiness over northern Scandinavia, which in turn has reduced the impact of warming.

“The surface warming caused by rising greenhouse gases is modified by many complicated feedbacks — one thing changing in response to another —  meaning that there are large geographical variations in the temperature of a particular place at a particular time, as the global average temperature rises.

“One of the most important, and most poorly understood, climate feedbacks is the relationship between temperature and clouds. We might think that, simply, when it is cool it is cloudy, and when it is warm it is sunny, but that is not always the case.”

The research team analyzed tree ring records to find out what summer temperatures were like in the past, and how cloudy it was. Using their collected data, the team produced a new reconstruction of summer cloud cover for northern Scandinavia and compared it to existing temperature reconstructions to establish the relationship between temperature and cloud cover. Gagen said:

“Most people know that the width of a tree ring can tell us what the temperature was like in the summer that ring grew, but we can also measure other things in tree rings such as the isotopes of carbon and water that the wood is made from. Isotopes are just different types of an element; the amount of the different isotopes of carbon in the wood tells us how cloudy it was in the summer the tree ring grew.

“By combining the tree ring width and tree ring carbon measurements, we built a record of both past summer temperatures and past summer cloud cover. Summer temperatures in Scandinavia have increased by less than the global average in recent decades because it also got cloudier at the same time, and that modified and reduced the warming. That turns out to also be the case back through time.”

“We found that over short timescales, increased cloud cover led to cooler temperatures and vice versa in the past. However, over longer timescales — decades to centuries — we found that in warmer times, such as the medieval, there was increased cloud cover in this part of the world, which reduced local temperatures. The opposite being true in cool periods, such as the Little Ice Age.

“These finding are important as they help to explain the feedback relationship between cloud cover and temperature, which is one of the major uncertainties in modelling future climate. Understanding the past relationship between temperature and cloud cover in this part of the world means we can now predict that, as the global temperature continues to rise, that warming will be moderated in northern Scandinavia by increasing cloud cover. The next step is to find out whether the same is true for other parts of the world.”

“One of the main sources of uncertainty about future climate change is the way that clouds are going to respond to warming, cloud cover has a really big influence on temperature at the surface of the Earth.

“Clouds are going to be critical in modify warming of the climate. In some places, like Scandinavia, it turns out that the summer climate gets cloudier as the planet warms, in other places though it is likely that warming will be enhanced by a reduction in cloudiness, which will make the surface of the Earth even warmer.

“What is really worrying is that climate models have shown that, if greenhouse gas emissions are allowed to continue until there is double or even triple the pre-industrial amount of carbon dioxide in the atmosphere, then some of the most important clouds for cooling our planet, the big banks of oceanic clouds that reflect a lot of sunlight back to space, could stop forming altogether and this would really accelerate warming.”

Provided by: Swansea University [Note: Materials may be edited for content and length.]