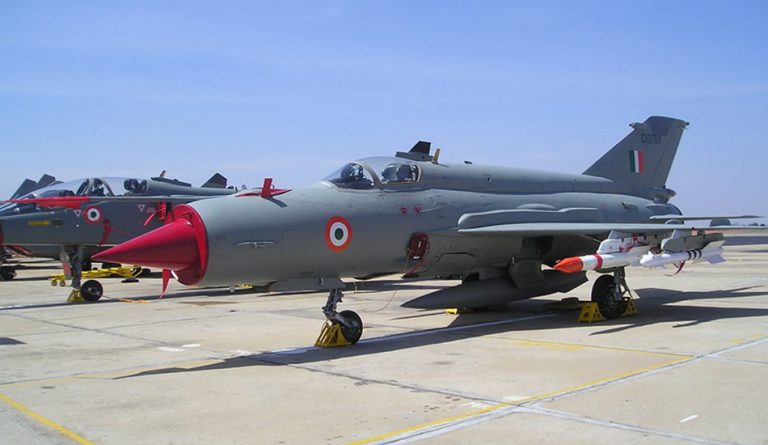 On March 8, the Indian Air Force (IAF) reported that a MiG-21 Bison aircraft crashed in the state of Rajasthan. Fortunately, the pilot ejected in the nick of time and there were no casualties. However, the incident once again brought to light the fact that India has a hodgepodge of older aircraft and equipment with British, French, Israeli, U.S., and Indian origins, with Russian (Soviet Union) aircraft dominating its inventory.

The 60-year-old Soviet-era MiG-21 Bison is known to have a tendency to crash quite frequently and has been dubbed the “flying coffin.” According to data from the Ministry of Defence, more than 490 Mig-21 planes have been lost in crashes since 1963, with 171 pilots losing their lives in the process. One of the main reasons for this is rumored to be the use of Chinese parts in the aircraft.

In India, Hindustan Aeronautics Ltd. (HAL) holds the license to produce Soviet-era MiG-21 jets. In 2015, an IAF pilot named Sanjeet Singh Kaila took HAL to court for manufacturing aircraft with faulty parts. He had survived a MiG-21 crash in 2005 that had left him mentally traumatized for several years.

Kaila argued that by delivering aircraft with low safety standards, HAL was essentially violating his right to work in a safe environment. The medical report showed that the pilot was rendered unfit for flying because of the crash. Eventually, the court held HAL responsible for Kaila’s condition and asked that they financially compensate the pilot.

Following the verdict, the Indian media pointed fingers at the Soviet-origin MiG-21, stating that it was of poor quality. Russian representatives hit back by saying that the poor safety record of Indian manufactured MiG-21 was due to HAL using Chinese spare components. The Chinese claimed that they never exported MiG-21 components in any large quantities to India.

An investigation was conducted into the matter. It was discovered that HAL had indeed purchased Chinese manufactured spare parts to use on the jets as a means to save costs. However, the purchases were made through other countries. The use of Chinese components was essentially pointed out as the reason for the high failure rate of the Indian MiG-21. IAF still operates around 113 MiG-21 aircraft.

Though HAL has often been linked with MiG-21 crashes, it would be difficult to put the entire blame on the company alone. It actually is one of the leading defense equipment manufacturers in India and has a relatively good record. The only problem is that being a public sector undertaking (PSU), the company has been plagued with bureaucratic inertia, political interference, and resource mismanagement.

In 1975, HAL was forced to stop manufacturing the country’s first indigenously produced aircraft, the HF-24 Marut. The Soviet Union had apparently convinced the Indian government to stop production of the indigenous jet and instead license its MiG-21 aircraft for local manufacturing. This ended up as one of the biggest mistakes of the Indian defense establishment.

“HAL could never build a fully 100 percent MiG-21 because its production always required procurement of some parts from the Soviet Union. In the end, HAL was not allowed to build the Marut and neither was it able to master the MiG-21. It was a clear case of external sabotage coupled with internal acquiescence,” according to Business Today.

At present, HAL is in process of delivering India’s second indigenously built supersonic fighter, Tejas, to the military. IAF has estimated that it would need 20 twin-seat trainers and 200 single-seat fighters. The indigenous content in Tejas is reported around 75 percent by the number of Line Replaceable Units (LRU) and approximately 60 percent when assessed by value.