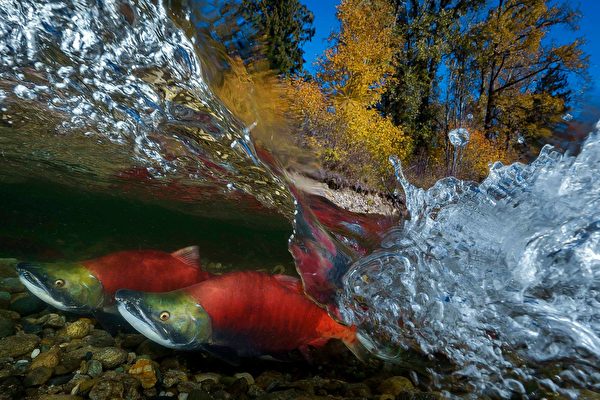 In order to capture the stunning shot, Wu Yung-sen had to wait until the salmon migrate, an event which happens only once every four years. To get the shot, he had to be in the cold water of a brook in Canada with the temperature in the lower 40s. Wearing a wetsuit, Wu lingered in these low temperatures in the turbulent water waiting patiently for the right shot.

Inspiration from an inverted image

On the second day of shooting and despite the bad weather during the day, Wu Yung-sen captured a picture of a salmon as it swam in the middle of the clear stream by using an inverted image style after being inspired by looking at some pictures taken by his friends.

This photo with the inverted image inspired his next shot because he wanted to take a multi-faceted, beautiful, and unforgettable picture with blue sky, trees, waves, and salmon underwater.

Finally, the sun came out

Wu Yung-sen soaked in the cold water for three days. “On the fourth and fifth days, I finally had the right light.” Wu Yung-sen was very excited and wrote on his Facebook: “Life is full of waiting and expectation!”

Wu Yung-sen resisted the impact of the turbulent water, lying in wait in the biting cold stream for several hours under the clear blue sky. Finally, his patience was rewarded as he captured the rare and beautiful picture of a blue sky, green trees, red and green salmon, and the clear water movements. After that, Wu Yung-sen found that he was pretty much worn-out by his efforts.

Wu Yung-sen said: “This year happens to be the one when the salmon migrate up here every four years. It is estimated that there are seven million salmon swimming here.” The number of salmon spawning this time is the highest for the past few years. That afforded him the rare opportunity to shoot the beautiful photograph.