Respite From the Clamor: Lessons From Artist Morgan Weistling 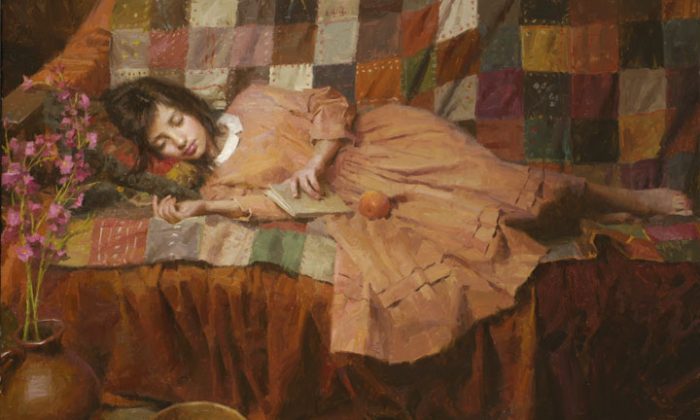 Fine artist Morgan Weistling upholds the lineage of the golden age of illustration, along with the likes of Norman Rockwell, J.C. Leyendecker, and his mentor and instructor, Fred Fixler. While designing artwork and posters for Hollywood films for over a decade, Weistling honed skills he now uses as an independent painter and art instructor.

Characterizing Weistling’s works is simple. Perhaps from his youthful pastime of playing with stories and creating narratives, Weistling goes to great lengths to pull together all of the actors and elements for the background of a painting that, once woven together, become his often restful, soft, and iconic images of the Old West.

“I tried to paint images in different eras, but something about it never works. I keep coming back to the Western frontier,” said Weistling, jokingly adding that he had a time machine, but that it was stuck in the 19th century.

The small rustic town in California where Weistling grew up may be partly to blame. The pioneer spirit was ingrained in the history and culture of the area, and it was part of Weistling’s identity.

“I am absolutely bored with the idea of painting a kid with a tank top and flip flops, holding an iPhone. To me, that is not very timeless,” Weistling said.

The 19th century was simpler; it’s a time that evokes the mindset Weistling likes to enter when he paints, away from electronics and distractions of the modern age.

“I’d rather show something lit by a candle than an LED light,” he said.

Despite Weistling’s overarching setting, the motive behind each individual painting may not be obvious. For his painting The Family Trade, detailing a blacksmith and his family, he auditioned three people to model as the blacksmith and did extensive planning and preparation to capture one thing: “What I really wanted to paint were the sparks coming off the horseshoe when he hits it with his hammer,” he said. “I had to paint all that other stuff just to have a reason to paint that little effect.

“Many artists have that one thing in their paintings that they just couldn’t wait to capture.”

The foundations and essential skills of art were passed down to Weistling by his parents. After serving in World War II, Weistling’s father dreamed of becoming an artist and bought the best art books on the subject, including anatomical and figure drawing books by Andrew Loomis, John Vanderpoel, and George Bridgman.

Although Weistling’s father had to forego his dreams of becoming an artist, he passed on his books and his love of art to his son. The talk around the dinner table wasn’t about whether Weistling finished his math homework, but about whether he was studying anatomy.

At age 15, Weistling attended the Brandes Art Institute, a quaint studio run by Fred Fixler, who Weistling said was one of the best teachers one could find at the time. Many found him demanding and strict, but he was also humble. “He was always honest in his critiques… He was hard to please, but that drove many of us to try our best,” Weistling said.

Fixler, an illustrator in the ’40s, ’50s, and ’60s who worked on movie posters and designs for many classic films, was well versed in the traditional skills of representational art. “I had an old-school academic teacher when at the time, that wasn’t being taught in any of the schools around here,” Weistling said. Everything he could have hoped for in terms of learning how to draw and paint was passed down to him at the art institute.

That instruction paid off. While working as a janitor at the art institute, a well-known illustrator came in to buy supplies. Weistling had his work close at hand in the case just such a situation would arise. The next day, Weistling got a call to work for a poster design agency in Hollywood. He was soon designing artwork and posters for big-name actors like Mel Gibson and Arnold Schwarzenegger.

Then, after a career of 14 years, Weistling began his work as an independent artist. Away from the action and intensity of Hollywood illustration, Weistling now invests much of his time in his studio and in the field, looking for references for his next painting. He said it was like being a kid again in the world of imagination, always creating stories and narratives, creating background stories for many of the characters in his paintings, and finding the inspiration for his next painting.

Weistling holds art workshops and demonstrations where, with clarity and humor, he stresses the fundamentals of drawing and painting.

One of the essential lessons in representational art that Fixler taught was to see the 3-dimensional as 2-dimensional and flat, a process of simplification that helps to break down what we see objectively. (Many of Fixler’s instructions, lessons, and wisdom can be found online at FredFixler.com)

“Most people habitually see through the filter of the knowledge of what we are looking at. It’s almost a Zen-like experience to train your eye to see and record based on measurements and negative shapes. Once the accuracy of placement is achieved this way, then our minds click over and use their knowledge to design and add depth. It’s a constant dance, back and forth, between these two ways of seeing,” Weistling said.

Frequently, Fixler would stress that mastering the fundamentals of drawing and painting is the most important step for any beginning artist.

Weistling carries on Fixler’s lessons to his students. The four fundamentals are shape, values, edges, and color. Learning the different aspects of each of these keeps the artist focused on what is important and distinguishes an amateur from a professional.

Also crucial is the ability to discern beautiful and ugly shapes. “A really accomplished artist has learned to recognize what is a beautiful-looking shape as opposed to a haphazard, ugly shape,” he said. “It is a study in itself just to figure that out. J.C. Leyendecker was incapable of creating ugly shapes. Down to the last detail, everything had amazingly designed shapes.”

As an example, Weistling described drawing a horse: “There is a space between the ground, the legs, and the underside of the horse that creates this big negative shape. How you treat that big negative shape determines if you are a pro or an amateur. The underbelly of the horse has a slight curve to it. You are going to make sure you have a nice, sweeping curve.

“An amateur wouldn’t even be thinking about having a beautiful flow to it. They will haphazardly paint with their brush and create whatever shape might happen. It will become aesthetically unappealing because there is no feeling of design behind the brush.”

Fundamental to design is the knowledge of shapes. “You can learn everything you need to know about design just by learning how to draw the head. Within the head, there are a million choices and shapes you can use to create something.”

Weistling has won many awards for his work, including the Masters of the American West Purchase Award and the Prix de West Purchase Award. Many of his paintings can be found in permanent collections in museums throughout the United States.

For more information on Morgan Weistling and his works, visit MorganWeistling.com

Written by Tim Gebhart, who is an artist and teacher living in Portland, Oregon.