Taiwan Shows Communist China That Religions Are Not to Be Feared 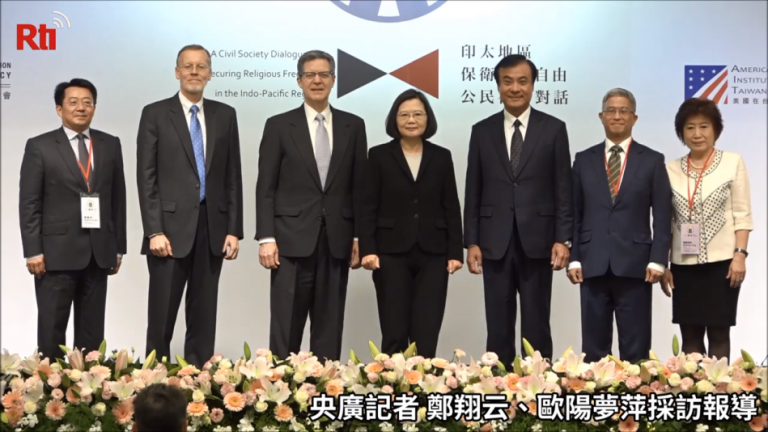 In a joint conference on religious freedom, representatives from both the U.S. and Taiwan highlighted how the island nation was markedly different from China when it comes to matters of faith. (Image: Screenshot / YouTube)

In a joint conference on religious freedom called “A Civil Society Dialogue on Securing Religious Freedom in the Indo-Pacific Region,” representatives from both the U.S. and Taiwan highlighted how the island nation was markedly different from China when it comes to matters of faith. While Beijing practices a policy of crushing religious identities, Taiwan openly embraces them. The event was held in Taipei on March 11, 2019.

“There is a road not far from this hotel, Xinsheng South Road, and people call it: the road to heaven. Why? If you take a stroll there, you can find places of worship for Buddhism, Muslims, Christians, Catholics, and Mormons almost next to each other… On Sundays, that road is full of believers of different religions. And yet they put aside labels and ideologies, and tolerate and accept each other. Freedom of religion has become central to our democratic way of life,” Tsai Ing-wen, Taiwanese President, said in a statement (Office of the President Republic of China).

Yan Yingjie, director of the American Association for Taiwan, feels that there are very few places in the Indo-Pacific like Taiwan that represent a true amalgamation of various cultures and beliefs. Zheng Haochang, a commentator on current affairs in the United States, stated that the Chinese Communist Party (CCP) is extremely jealous of Taiwan’s democracy and religious freedom, to the extent that it ensures that such things are never discussed in local news.

Sam Brownback, the U.S. Ambassador for International Religious Freedom, argued that Taiwan could be used as an example by the Chinese government to realize that religions are not a threat to the state. A few days back in Hong Kong, he highlighted the plight of the Uyghur Muslim community of the Xinjiang region and raised the possibility of America imposing sanctions on those responsible for it. Interestingly, Brownback’s statements were never reported by most media in Hong Kong, signaling that the region had lost its freedom of expression under the CCP’s rule.

Despite several countries asking Beijing to stop its persecution of religious adherents, the Chinese government seems to be going the exact opposite way. It has initiated a plan to “sinicize” religions that are considered foreign. These include Islam and Christianity.

“Beijing considers the Arab influence as dangerous and believes it should be totally eliminated from the lives of Chinese Muslims… Also, it wants to cut off Chinese Muslims from other Muslim countries. In other words, China is trying to isolate its Muslim community while claiming it is embracing globalization,” Haiyun Ma, a history professor at the U.S.-based Frostburg State University, said to DW.

In many Muslim dominated regions of China, authorities have destroyed several mosques and banned the use of Arabic while reciting prayers. During this year’s Lunar New Year celebrations, it was reported that many Muslim families were invited for dinners and asked to eat pork, which is forbidden in Islam. Beijing is also seeking to control the weekly sermons conducted by the clerics.

With regard to Christianity, the CCP has already forced the Vatican to hand over power to nominate bishops in the official Catholic Church. Using this agreement, authorities have been persecuting several Christian congregations, as they are not recognized as official churches of the state. The government has banned group prayers in homes. Bible studies are being infused with communist ideologies to ensure that Chinese Christians end up being more communist than Christian.