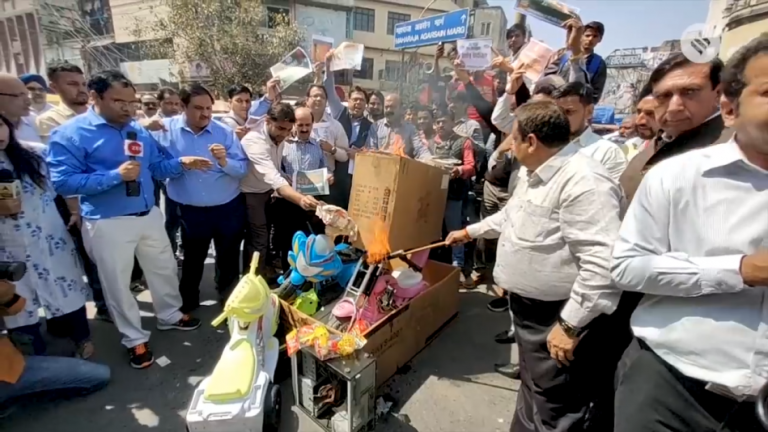 Traders in India recently held widespread protests across the nation where they burned Chinese products on the street. (Image: Screenshot / YouTube)

Traders in India recently held widespread protests across the nation where they burned Chinese products on the street. They wanted their country to boycott Chinese products since Beijing blocked India’s attempt at the United Nations to blacklist a wanted Pakistani terrorist named Masood Azhar.

Masood Azhar is the founder of the terror group Jaish-e-Mohammed (JeM), which was involved in a suicide bomb attack against the Indian paramilitary force in February this year. Forty officers lost their lives in the attack. At India’s request, the United Nations Security Council moved to blacklist Azhar. But there was a major hurdle — China blocked the blacklisting attempt, saying that it needs more time to “study” the issue.

This infuriated Indians who have been trying to get the person responsible for the deaths of their officers. As a result, the Confederation of All India Traders (CAIT) held a protest in which Chinese manufactured mobile phones, fax machines, laptops, and toys were burned. CAIT has about 60 million members across the nation.

In addition to venting frustration against Beijing’s decision at the UN, traders also asked the Indian government to limit the import of Chinese goods. Traders say that most products from China come at very cheap prices due to unfair trade practices. As such, Indian manufacturers are unable to compete with them when it comes to pricing.

“When such material which are grossly undervalued come to the port, custom duty is paid at a very low price. Also IGST [international goods and services tax] is paid at a very lower price and then this material goes into grey market and is sold at very competitive prices as compared to Indian goods where GST is paid at full amount,” CAIT said in a statement (QZ).

Even though some traders asked for a complete ban on Chinese products, experts do not see that happening. However, the government might consider increasing tariffs on certain products to send Beijing a message that acting against the security interests of the country can damage the business prospects of Chinese companies. The Indian government could also consider providing tax incentives to local manufacturers so that Indian products get priced competitively against Chinese ones in the future.

India has tremendous potential in the manufacturing sector and even beats China when it comes to labor costs. India’s labor cost in 2015 was estimated to be US$1.72/hour. The Chinese charged almost two to three times the figure. Despite this advantage in labor cost, India has lagged behind China in developing a robust manufacturing industry mostly because of poor economic planning.

India’s infrastructure is considerably below par. The lack of a well-developed transportation network of roads, airports, and shipping ports means that products manufactured in India incur heavy transportation costs. Cutting down logistics costs from 14 percent to 9 percent of GDP would result in savings to the tune of US$50 billion. This would essentially make products cheaper and more competitive both in the domestic and international markets.

“The scale of manufacturing in India needs to be increased, but that cannot happen by catering to the domestic market alone. Companies need to be able to tap global markets, for which India needs a strong policy that provides incentives for export of electronics goods. This will create the scale that will attract FDI into the country from global electronics component manufacturers and create jobs,” according to The Economic Times.

India also needs to develop an efficient dispute resolving mechanism for contracts. While it takes about six months for a business dispute to be settled in Singapore, it takes almost four years for the same dispute to get resolved in India. Such lethargy only keeps manufacturers away from setting up shop in the country.