Italy Moves Closer to Communist China Despite US, EU Warnings 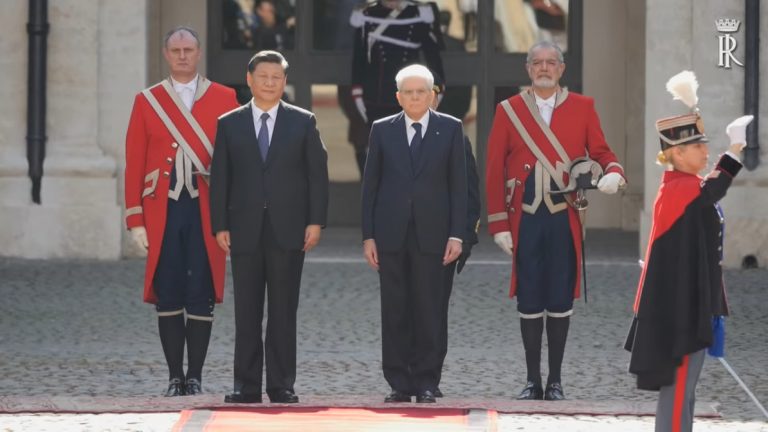 During Chinese President Xi Jinping’s recent visit to Italy, the EU nation signed many deals that made it a member of Beijing’s Belt and Road Initiative. (Image: Screenshot / YouTube)

During Chinese President Xi Jinping’s recent visit to Italy, the EU nation signed many deals that made it a member of Beijing’s Belt and Road Initiative (BRI). By doing so, the Italian government effectively turned a blind eye to U.S. and EU warnings about China. Several politicians in Italy are also concerned that the government may have compromised the security of the country by aligning with the communist regime.

Cozying up to China

The president of Italy, Sergio Mattarella, told Xi that the proposed Silk Road link between Italy and China must be a “two-way street,” emphasizing that the Italian society must reap benefits of the same magnitude as Chinese businesses. The statement seems to signal that the Italian President does not trust Beijing very much.

In fact, Mattarella’s words indicate “that he fears there hasn’t been enough transparency so far in relations between China and Italy. Allies may also have expressed to him their worries about how Italy is managing the new relationship with China… The accent is that Italy risks becoming a Trojan horse for the Chinese invasion,” Francesco Sisci, an expert on China, said to AP News.

More than 30 agreements were signed between Italian and Chinese representatives; the value of the deals was estimated to be somewhere around US$2.8 billion. However, the figure could go much higher and end up closer to US$22.5 billion. The deals focus on investments in airports, shipping ports, roads, railways, etc. China Communications Construction Co. (CCCC) has signed two agreements with authorities of the Italian ports at Genoa and Trieste. The company plans on using these ports as a starting point to develop a trade route to continental Europe.

Michele Geraci, Italy’s under-secretary for economic development, paraphrased the deals as “Italy leading.” However, opposition to Chinese deals has risen from within the government. Guglielmo Picchi, Italy’s under-secretary for foreign affairs, asked for the agreements to be scrutinized deeply. Matteo Salvini, Italian Deputy Prime Minister and Minister of Interior, stated that free market does not exist in China and that Italy needs to be cautious about Beijing when it comes to security, energy, and data.

In the U.S., Secretary of State Mike Pompeo expressed his disappointment with Italy as the country signed a non-binding protocol with China and became a part of the BRI. “It’s disappointing any time any country begins to engage in behavior and commercial interactions with China that aren’t straight up… We’re saddened because we think the people of those countries ultimately lose,” he said in a statement (South China Morning Post).

The European Union is also very concerned with Chinese investments in Italy. There is a fear that China might use Italy as an instrument to gain control over the politics of Europe. Germany, the Netherlands, France, etc. have all expressed their reservations about Chinese state-owned enterprises procuring European assets.

“[In] Italy and other European countries, infrastructure of strategic importance like power networks, rapid rail lines, or harbors are no longer in European but in Chinese hands… The expansion of transport links between Europe and Asia is in itself a good thing, as long as the autonomy and sovereignty of Europe is not endangered,” Gunther Oettinger, European Commissioner for Budget, said in a statement (The Epoch Times).

Oettinger has proposed an EU veto on future Chinese investments so that Beijing’s shady trade tactics can be effectively countered and Europe can prevent communist ideology from spreading in the region.