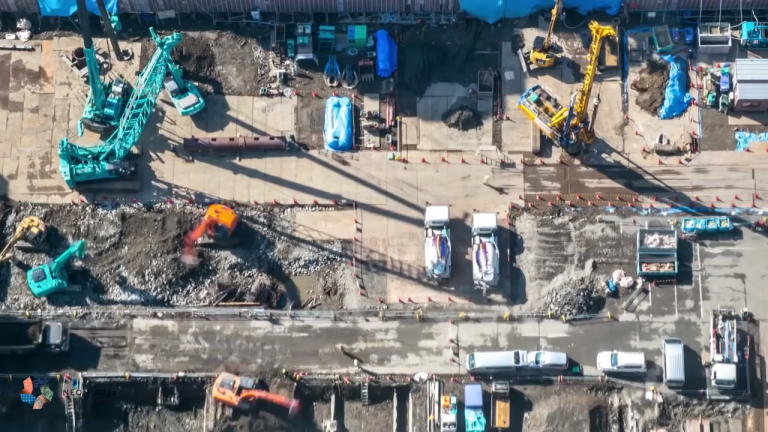 Today, buildings are constructed by human workers brick by brick, but a few decades from now, entire cities will be built by AI robots. (Image: nspirement)

Today, buildings are constructed by human workers brick by brick. A few decades from now, entire cities will be built by AI robots that mimic nature, as per a report published in Science Robotics. The report was prepared by Dr. Mirko Kovac, who directs the Aerial Robotics Laboratory at the Imperial London College in the UK.

“The cities of the future could be built and maintained by groups of land-based and flying robots working together to construct, assess, and repair the urban ecosystem of buildings and infrastructure. Nature provides ample proof that such collective construction is possible, and by applying some of these ideas to how drones are constructed, operated and made to cooperate, we could make this dream a reality,” Kovac said in a statement (Imperial).

In nature, there are many examples of organisms working together while constructing homes. For instance, several birds build nests by collecting, organizing, and distributing nesting materials among themselves. Termites use pheromones to coordinate in the construction of their mega-colonies. Observing such creatures closely and mimicking their behavior in an AI system could enable us to create swarms of tiny robots that could easily construct buildings without requiring any human intervention.

Researchers at Imperial College are in the process of creating “soft aerial robots.” These machines are basically drones that will be made of materials that can dynamically interact with the environment they are operating in. This will make the construction process more efficient as multiple drones with varying abilities can work together to complete a project. Scientists have already created a drone that can create webs of tensile material just like spider webs.

But prior to implementing such robots in new construction projects, researchers want them to be used for repairing and patching up existing buildings. This will allow the machines to gather data that can be processed by the AI to improve the workflow. Imperial College has already signed an agreement with Swiss Federal Laboratories of Material Science and Technology (Empa) to use drones to patrol a building and help human occupants identify and fix minor issues. In the future, the team hopes that the technology may be used to 3D print emergency shelters in times of natural disasters.

Major world cities have already prepared plans for integrating robots and AI systems to enhance the quality of life of their citizens. In Dubai, the government is rapidly robotizing public services, transportation, surveillance, policing, and so on. The administration has announced that it aims to robotize almost 25 percent of its police force and transportation system by the year 2030.

In Singapore, the government is trying to use robots as an extension of existing systems to improve control and management over the city. Autonomous delivery robots and driverless bus shuttles are increasingly commonplace in Singapore. Hotels in the city have started using robots for delivering supplies to guests as well as for cleaning the rooms. Robots are also being employed in schools in a bid to improve education standards.

Japan wants to use the Olympic Games in 2020 as an opportunity to showcase its robotic technologies. The government even instituted a council for the task in 2014, called the Robot Revolution Realization Council. The main objective of robotization is to brand Japan as a futuristic society and reinvigorate the economy. The administration plans on using robots to greet visitors in more than 20 languages, transport tourists across Tokyo using robot taxis, and provide smart wheelchairs to Paralympians at the airport.