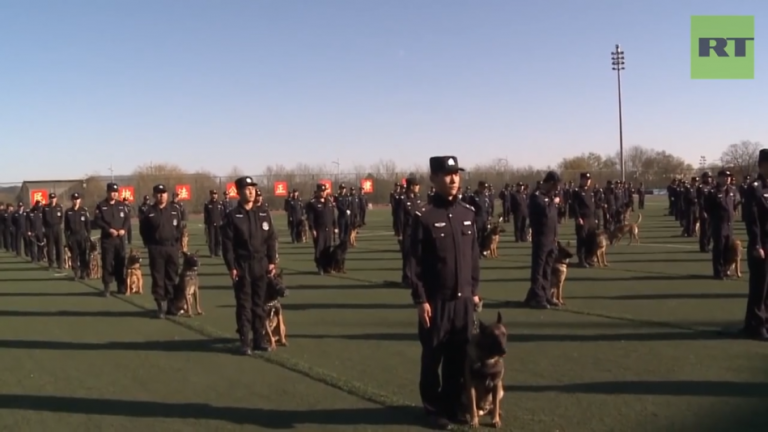 China is building a repository of cells of high-performance police dogs that it hopes to clone in the future. (Image: Nspirement)

China has reportedly cloned a police dog in hopes that it will take less time to train the animal. The 3-month-old puppy, Kunxun, has been cloned from a 7-year-old sniffer named Huahuangma. The Ministry of Public Service recognized the sniffer as a meritorious dog in 2016 due to its contribution in murder cases.

Kunxun was cloned by the Yunnan Agricultural University and Sinogene Biotechnology Company with assistance from the Ministry of Public Security. Born in December last year, the cloned dog is now undergoing training for its role in the police force. Researchers believe that Kunxun will inherit the “sleuthing genes” of Huahuangma, which has been nicknamed the “Sherlock Holmes of police dogs.”

Zhao Jianping, the Deputy General Manager of the company, stated that they will soon start “volume production” of such dogs since these animals will require less training time and have a lower dropout rate. Training a regular dog usually takes up to 5 years and costs around US$75,000.

“Tests show that Kunxun and Huahuangma are a “99.9 percent” DNA match, and the clone-pup has already outperformed other traditionally bred wolf dogs on several tests. Kunxun will now begin training in drug detection and crowd control, and is expected to be a full-fledged police dog at 10 months,” according to Live Science.

The cost of cloning Kunxun was not revealed, but is said to be very high as of now. China is also building a repository of cells of other high-performance police dogs that it hopes to clone in the future. However, it is not the first country to use cloned dogs in its police force. Back in 2008, South Korea started using six cloned dogs to patrol its streets.

In the U.S., dogs are deemed to be mature enough for police training when they are between 12 and 15 months. They usually work for about six years and retire at the age of 10. A famous cloned dog in the U.S. police force is Trakr, a German Shepherd that was responsible for discovering the last remaining survivor of the September 11 World Trade Center attack.

China is also seeing a big demand for pet cloning. Owners worried about their pet’s death are consulting cloning services and ensuring that the necessary genetic material is saved so that the animal can be “recreated” when the original one dies. Sinogene is China’s first biotech company to provide pet cloning services and was in the news last year when it cloned a beagle.

CEO Mi Jidong says that more people want their pets to live longer with them. Seeing the tremendous business opportunity, the company plans on expanding services to include gene editing so that “unwanted” characteristics of the pets can be removed from their cloned versions.

Sinogene’s success is an example of the rapid success of China’s biotech companies. A big reason for this is that Chinese biotech firms face less regulatory pressures than companies in the West. Though the Chinese government does have a strict set of rules concerning cloning and gene editing, no explicit law against animal cloning exists.

“On the government side, the image of this cloning industry is very high-tech, and definitely… is very supportive of those high-tech industries because of their high profit margin,” Tin-Lap Lee, an associate professor of biomedical sciences at the Chinese University of Hong Kong, said to Reuters.

Last year, a Chinese scientist claimed to have gene edited two baby girls in a bid to prevent them from inheriting HIV from their parents. Earlier this year, a laboratory in Shanghai announced that it had created the world’s first monkey clones.