Transcendental Illustrations: The Vision of Yuezun 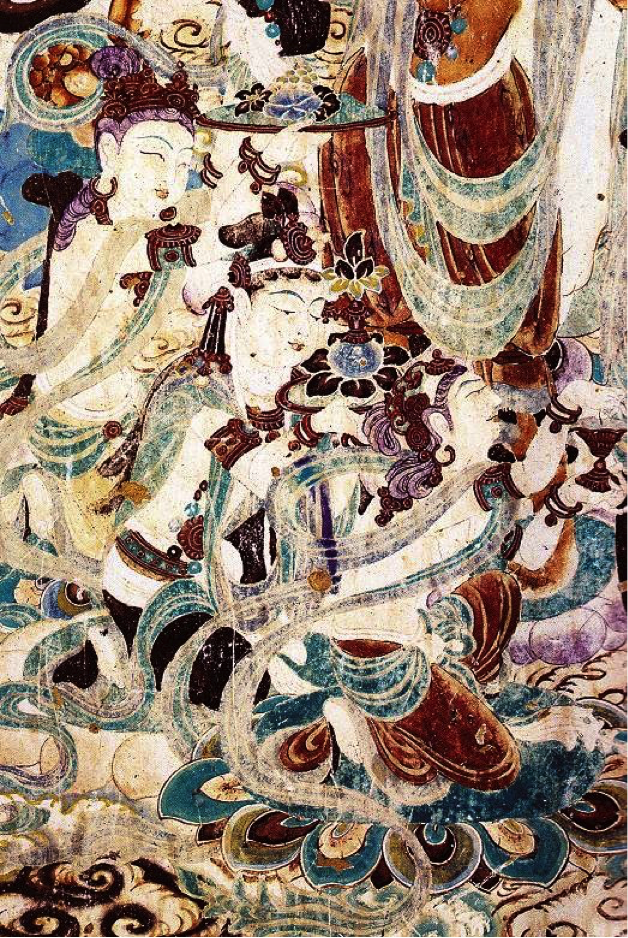 Details of painting of the meeting of Manjusri and Vimalakirti, Mogao Caves. (Image: wikimedia / CC0 1.0)

He had a vision of a golden light shimmering at the edges of a cliff face with a thousand golden Buddhas and celestial maidens singing, dancing, and playing instruments. It was Buddhist monk Yuezun’s dream that he saw and followed to its source in northwestern China in the inhospitable desert along the Silk Road toward what is now known as the Mogao Caves.

Yuezun carved out a small niche in the cliff his vision led him to and painted the heavenly scenes he saw on its walls. Contemplating the details of the numerous heavenly figures, their temperaments, and expressions, Yuezun was said to have eventually worked into habit a noble countenance. His mind became serene and he was said to have attained enlightenment. He began to embody what he painted.

The Mogao Caves lay along the perilous Silk Road. During its heyday, roughly between the Han and Tang dynasties, every entourage and caravan imaginable trampled along its winding and nearly endless paths. Goods, ideas, and the glossy silk fabric flowed to the far corners of the world from China to the exotic Roman Empire in the West. Armies marched to and fro on the road, fighting in the deserts, mountains, and plains for kingdoms now entombed by the elements.

The Silk Road also accommodated drifting monks. Monk Yuezun had traveled to Dunhuang, an outpost town on the Silk Road on the far western corner of China in the Taklamakan Desert, and lay to rest at an oasis. It was then that he had his vision.

He was later joined in his cave by other traveling monks who had the same vision. They stopped as well and carved out their own meditation chambers. Each decorated their chamber with elaborate depictions of Buddhas and their paradises, and stories from the Buddhist tradition.

The artwork painted and carved in the Mogao caves gives us a glimpse into the hearts of those who dwelled in the caves, as well as the dynasties that came and went in China, each with its own distinct character, its emperors, warriors, maidens, and common folk who provided the narrative for many of the paintings.

The monk’s visions soon became a reality, in a sense. The monks dedicated themselves in the caves to seeking higher wisdom and universal order through compassion and temperance, and the Mogao Caves became one of the most important repositories for Buddhism and Buddhist art in the world.

Poplar trees were later planted by the monks at the base of the cliff. The soft sound of blowing sand and the calm wrestle of the leaves of the trees in the wind overlooked by solemn celestial figures gave the oasis an otherworldly appeal ideal for elevating the mind beyond human concerns.

Over time, the monks residing at Mogao noticed a subtle shift in mankind’s morality outside of the confines of their abodes. Around the 5th century, men’s hearts became more entrenched in the mundane world than in the transcendental and spiritual. The shift brought more frequent wars, diseases, and hardships as a result.

The Buddhist sutras, or teachings, described this period as the age of decline, or mofa, according to The Getty Conservation Institute. The sutras, or religious texts, stated that everything goes through birth, stasis, decline, and then destruction. The age of decline had begun for the world.

In fact, many of the later cave paintings at Mogao were commissioned by officials, who as their thinking became more and more avaricious, hoped to gain a meritorious afterlife in this way. And so, the subject matter of the paintings increasingly detailed worldly affairs.

Later yet, the Mongol hordes, the plagues spreading from Europe, and new trade routes by the sea led to decreased use of the Silk Road. The Mogao Caves were nearly lost in the blowing sands of the desert.

A visiting Taoist priest, Wang Yuanlu, stumbled upon the deserted caves in the 1890s and discovered Mogao’s inner secrets. Volumes of manuscripts had been hidden away in a sealed cave known as the Library Cave. British and French explorers eventually persuaded Wang Yuanlu to reveal the location of the hidden library, and they hauled away to their respective countries many of the priceless manuscripts and artifacts — including religious texts, star charts, ancient remedies, and the detailing of historical events.

The caves were again deserted, save for refugees and wanderers, between the first and second world wars. In the 1960s and 1970s, when the Cultural Revolution laid waste to the traditional Chinese heritage and its essence based on virtuous harmony, temples and civic buildings were almost nearly all destroyed, along with the works of art within them.

The remote solitude that the early monks of the Mogao Caves enjoyed, far from sight and from the minds of the revolutionaries, spared the caves from these ravages. The poplar trees now shade the millions of tourists who visit the site every year, as well as conservationists painstakingly trying to preserve the artworks for future generations.

Many of the thousands of manuscripts found at the caves have been preserved in museums throughout the world and are being digitally processed — they are available at The International Dunhuang Project’s website at http://idp.bl.uk/