Marx: A Devout Disciple of Satan 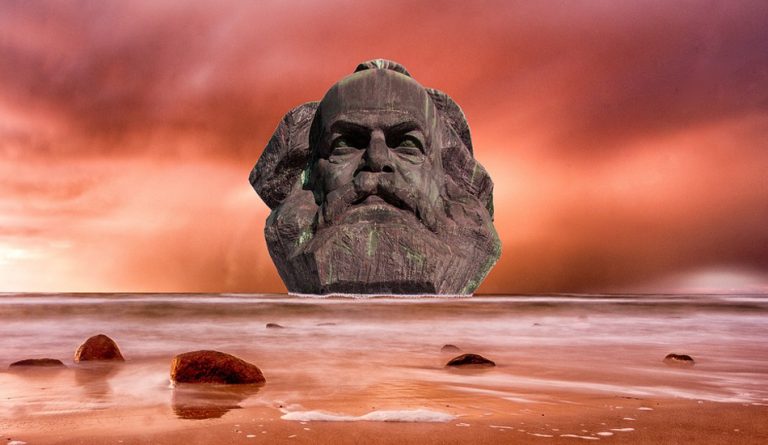 Reading Marx's poems reveals his devotion to Satan and his desire to replace God with himself. (Image: via pixabay)

According to The Black Book of Communism, communist ideology is responsible for the death of almost 100 million people. Most people assume Karl Marx to be an atheist. He, himself, propagated such ideals, but an investigation into the individual lets us discover that this was a ploy to disconnect men who followed Marxism from the divine.

As for Marx, he always carried satanic tendencies brought forth through his poems and books. It isn’t so hard to understand why communism turned out to be the destructive force it is.

The agent of evil

The satanic side of Marx can be glimpsed in the numerous poems he wrote in which he lashes out against God and takes the side of the devil. In some poems, he equates himself to God, having power over all creation. In a part of a poem titled Human Pride, Marx reveals his desire to replace God with himself.

“Words I teach all mixed up into a devilish muddle.

Thus, anyone may think just what he chooses to think.

With disdain I will throw my gauntlet full in the face of the world,

And see the collapse of this pygmy giant whose fall will not stifle my ardor.

And, giving my words an active force, I will feel equal to the Creator,”

The first two lines of the poem also explain one of the main objectives of Marxism — to cause confusion. By clever use of words, communists make people believe that they can think whatever they want, that they do not have to concern themselves with right or wrong since morality is “arbitrary.” And by laying down this belief as the foundation of society, communists are able to commit great anarchy.

A couple of verses from the poem called The Fiddler are even more explicit in revealing Marx’s obsessive worship of Satan.

“Till heart’s bewitched, till senses reel:

With Satan I have struck my deal.

He chalks the signs, beats time for me,

I play the death march fast and free,”

Marx’s destructive streak is present in one of his unfinished poems he wrote during his youth. Called Oulanem: A Tragedy, a few verses read:

“The world which bulks between me and the Abyss,

I will smash to pieces with my enduring curses.

I’ll throw my arms around its harsh reality:

Embracing me, the world will dumbly pass away,

And then sink down to utter nothingness,

Perished, with no existence — that would be really living!”

All these poems point to a lonely, psychologically damaged person who is angry at everything — angry at God, angry at society, angry at humanity, and angry at anyone who thinks differently. In fact, his desire for destruction seems to be driven by the realization of his own insignificance and worthlessness. To understand why Marx would have felt worthless, one has to look at how he made a living.

During the several years Marx was cooped up in his home to write the various theories of communism, it was his friend, Frederick Engels, who worked to provide him money. In fact, Engels gave half of his income to his friend every month. Marx essentially was able to live his life and take care of his family using this money. Given that most men get their sense of identity by working and taking care of their family, depending on another man’s hard work to fill these needs for almost all his adult life is sure to have made Marx feel worthless to some degree.

Engels was not the only one who supported him. He is said to be related to the Rothschild family and was employed by them to subvert democracy. “One of Marx’s grandparents was Nanette Salomon Barent-Cohen, who belonged to a wealthy Amsterdam family. Her cousin had married Nathan Mayer Rothschild and bore Lionel Nathan Rothschild, ‘Baron’ and Member of Parliament for the City of London,” according to News Punch.

One of the most satanic things a human being can do in his life is to eat his own kind. Communist regimes have been known to result in cannibalism. This has been true across Russia and China. The utopian ideologies eventually drive people into so much poverty and hunger that many end up choosing to eat another human rather than die with dignity.

In the Russian famine between 1921 and 1922, it is well known that some peasants engaged in cannibalism. Lenin was apparently overjoyed that the famine was killing millions of people as he believed it would end the public’s faith in the tsar and God. He believed that socialism would eventually follow famine. According to estimates, around 5 to 10 million people died during this horrible period. The Soviet Union underwent another major famine between 1932 and 1933 under Stalin. People not only cannibalized human corpses but also kidnaped children in order to consume them.

In China, the country faced similar abhorrent times under the ruthless leadership of Mao. His policies were partially responsible for triggering a 4-year famine between 1958 and 1962 in which an estimated 15 to 30 million people died. And just as in Russia, some Chinese resorted to cannibalism to keep themselves alive. In a commune, people were found to be eating dead bodies and even selling them as pork. Some killed their own children. Mao kept his eyes closed at such deaths. In fact, he and his Party members believed that the famine was punishment the public suffered for not believing in the Chinese Communist Party (CCP).

The complete destruction of spirituality and sacredness of life meant that people under communist rule became mentally conditioned seeing others merely as objects. As a consequence, when famine struck, they started viewing humans as a potential food source. This is something that would never happen where people were strongly rooted in their spiritual traditions. The sacredness of human life would have blocked people from engaging in such heinous activities.