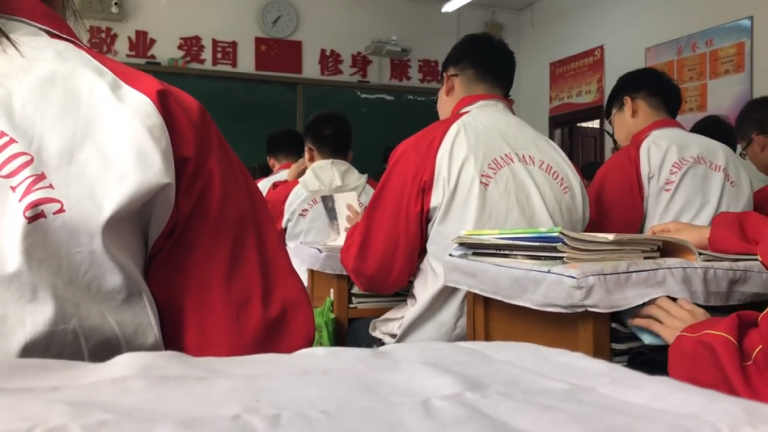 In January this year, an incident of school bullying shocked China. An 8-year-old girl from northwestern Gansu Province was physically harassed and violated with a broomstick by her classmates. Chinese social media was in an uproar following the brutal incident. Playwright Yang Zhefen’s latest creation Fade Away is a stark reminder of the deep culture of bullying pervading the country’s schools.

“People whose lives are under the light maybe never know, after all, just how dark those dark places are…. [I]n a certain corner of the world you don’t know, an incident of school bullying is happening ten or a hundred times crueler than what was in the play,” Yang said to RADII.

The play is inspired by Yang’s own experience of witnessing bullying. When she was in college, she discovered a younger student in a dorm room. Her face was swollen and there were bloodstains on her buttocks. The victim was physically abused by four other girls, one of whom suspected the underclassman of trying to “steal” her boyfriend.

Though the incident was reported to the school authorities, no action was taken against the attackers. Instead, the administration simply noted the incident and brushed it aside. The perpetrators continued living in their dorms. Yang was shocked that the school officials who were obliged to protect the students actually turned a blind eye to the crime. However, this is not an isolated incident. Schools actually tend not to take action against bullies, thereby worsening these situations.

“When a child is bullied on school property, the head teacher is scolded and, in more severe cases, faces disciplinary action. The administration rarely reports the case to police because the school’s reputation, as well as the careers of staff members, is at stake. In such scenarios, the administration tends to sideline parents who insist on legal action. Instead, it often chooses to stand on the side of the bully’s parents in the hope of reaching a peaceful resolution. But, by choosing to do so, the administration encourages lawlessness and schools become a breeding ground for bullies,” according to World Crunch.

A report by the Public Health Department states that more than 180,000 students from 18 Chinese provinces had experienced some form of bullying. Almost 66 percent of boys and 49 percent of girls have been bullied. Most of the bullying is seen in junior or senior high school where kids are between the ages of 12 and 18. With the influence of digital media, bullies often record the harassment and threaten to post it online, thereby forcing the victim to be bullied further.

In an effort to control bullying in schools, Chinese authorities have enacted several new rules. In the province of Guangdong, the Department of Education passed new laws last December that sort school bullying into three different levels and lay down the punishment to be meted out to perpetrators.

“Name calling, destruction of petty property, insulting or slandering people on social media, and insulting a person’s character are the least serious offenses while punching, kicking, slapping, tripping, or hair pulling, forcibly removing clothing and extortion fall into the middle category. The most severe cases involve repeat offenders, the use of knives or other weapons to threaten or assault a victim, and the uploading of photos or videos of other people being bullied,” according to South China Morning Post.

If the bullies are 14 years of age, they will be held responsible for violent crimes like rape, assault, or murder. They won’t be treated as minors, but will be considered mature enough to bear the full legal consequences of their actions. Schools that do not punish bullies within 10 days of the harassment will be subjected to penalties.