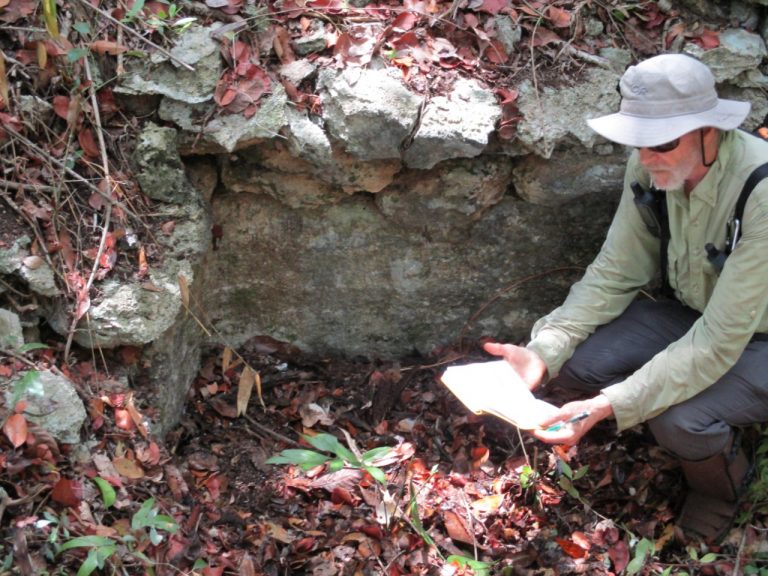 Archaeologists with the University of Cincinnati used the latest technology to find evidence suggesting ancient Maya people grew surplus crops to support an active trade with neighbors up and down the Yucatan Peninsula. They will present their findings at the annual American Association of Geographers conference in Washington, D.C.

The Mayan civilization stretched across portions of Mesoamerica, a region spanning Mexico and Central America. The oldest evidence of Maya civilization dates back to 1800 B.C., but most cities flourished between A.D. 250 and 900. By the time Spanish ships arrived in the 1500s, some of the biggest cities were deserted. Researchers at UC are trying to piece together the life history of the Maya before the Spanish conquest.

Nicholas Dunning, a professor of geography in UC’s McMicken College of Arts and Sciences, was part of a research team that found evidence of cultivation along irregular-shaped fields in Mexico that followed the paths of canals and natural water channels at a place called Laguna de Terminos on the Gulf of Mexico. The archaeologists expect to find evidence of habitation when they begin excavations.

The extensive croplands suggest the ancient Maya could grow surplus crops, especially the cotton responsible for the renowned textiles that were traded throughout Mesoamerica. Dunning said:

“It was a much more complex market economy than the Maya are often given credit for.”

Local workers brought the Laguna de Terminos site to the attention of researchers about seven years ago. Dunning added:

“A forester working in the area said there seemed to be a network of ancient fields.

“I looked on Google Earth and was like: ‘Whoa!’ It was an area in the Maya Lowlands that I’d never paid any attention to. And obviously not a lot of other people had, either, from the perspective of looking at ancient agriculture.”

Satellite images revealed a patchwork quilt of blocks along drainage ditches that suggested they were built. The archaeologist also studied imagery NASA created of the region using a tool called Light Detection and Ranging, or LIDAR, that can depict the contours of the ground beneath the leafy canopy of trees and vegetation. Their review confirmed Dunning’s suspicions: The area was covered in ancient farm fields. Dunning said:

“It appears they developed fairly simply from modifications of existing drainage along the eastern edge of the wetlands.

“They probably deepened and straightened some channels or connected them in places, but then further expanded the fields with more sophisticated hydro-engineering.”

LIDAR gives scientists a never-before-seen picture of the Earth’s surface even after centuries of unchecked jungle growth conceals the remains of ancient structures. Researchers look for telltale signs of human activity — squares and rectangles indicating old foundations and circular pits from man-made reservoirs and quarries where the chert used in stone tools was mined.

On the LIDAR maps, any hidden structures pop out, including ancient roads and former villages. “That’s the magic of LIDAR,” UC assistant research professor Christopher Carr said. Carr spent a career practicing engineering before returning to UC to study and eventually teach in the geography department. He approaches questions about the ancient Maya from an engineer’s perspective.

Carr pointed to a map of Yaxnohcah, Mexico, showing a small reservoir the ancient Maya apparently dug in a wetland far from cultivated fields or known settlements, asking:

“What were my ancient counterparts thinking when they built that water reservoir? What did they want to accomplish?”

Carr also used the LIDAR imagery in the project to follow an ancient Maya road that perhaps hasn’t been traveled in more than 1,000 years. The road is perfectly visible on the LIDAR map, but is virtually impossible to discern when you are standing right on it, Carr said, adding:

“There’s vegetation everywhere. But when you’ve been doing this for a while, you notice little things.

“I’ll have a LIDAR image on my smartphone that shows me where I am, but I don’t see anything but rainforest. You just walk back and forth until you can feel something underfoot and follow it.”

Identifying possible roads is important for another interest of the UC researchers — ancient Maya marketplaces. Dunning and Carr are working at Yaxnohcah with researchers, such as Kathryn Reese-Taylor from the University of Calgary and Armando Anaya Hernandez from Universidad Autónoma de Campeche, to unlock the mysteries of the ancient Maya economy. Additionally, they and graduate student Thomas Ruhl have been analyzing NASA’s LIDAR imagery across the Yucatan Peninsula to identify more ancient marketplaces.

Unlike pyramids or even many homes, marketplaces had no foundations or permanent structures, researchers said. They were built on low platforms or cleared areas, perhaps like a seasonal fair or flea market. But they were an important part of life in Maya culture. Dunning said the presence of roads between Maya cities would lend credence to the value the ancient Maya placed on trade with their neighbors. He thinks some of the larger squares identified on the LIDAR maps represent these open markets, adding:

“In some areas, they have this very distinct physical signature.

“So far, we’ve identified several possible marketplaces. We don’t know for sure that they’re marketplaces, but they have an architectural layout that is suggestive of one.”

Soil analysis at other locations identified evidence of ancient butcher shops and stone masons. Dunning solicited the help of UC’s botanists who are conducting analyses that might shed light on his marketplace hypothesis. But the LIDAR maps themselves are instructive. Carr said:

“I look at spatial patterns. If you look at these big structures and small pyramids, you can tell they’re important structures.

“And then you have this ‘lightweight’ thing next to it. That’s what a marketplace looks like to me.”

Dunning said the ancient Maya likely sold perishable goods, such as maize and a starchy tuber called manioc. And they traded “mantas,” or bolts of the ornate and richly patterned textiles made from the cotton they grew. These were prized by the Spaniards who arrived in the 1600s. Dunning added:

“We don’t have direct evidence of what the textiles look like in this area. But if you look at ancient paintings and sculptures, people were wearing very elaborate garments.” .

Dunning first explored the historic sites of the Yucatan Peninsula at age 14 when he and his older brother drove down to Mexico from Illinois, saying:

“We took a train to the Yucatan and used public transportation to get around to the sites.”

He applied to the University of Chicago partly because it offered a Mayan language class. Dunning returned to Mexico while in college to conduct his first field research. He’s been back many times since. Dunning said:

“My interest in archaeology is in human-environment interactions, including agriculture.”

Dunning is learning more about how ancient Mayan people shaped their world to overcome challenges and take advantage of natural opportunities. Dunning’s work also took him to a place called Acalan near the Gulf of Mexico. Dunning explained:

“And getting around by water is far easier than any other means in that area.”

Then, as now, the region was covered in thick tropical rainforest. Researchers have to be wary of cheeky monkeys that will throw fruit or worse from the treetops. Carr said one encounter left him sore for days:

“There was this aggressive spider monkey. He’d seen me a couple days earlier. And he’s back shaking the trees.

“And all of a sudden, I’m lying flat on the ground. A branch hit me in the shoulder and knocked me to the ground.”

Visiting archaeologists at Yaxnohcah stay at a former Army outpost that was converted into a staffed research station. Carr said:

“Living conditions are actually luxurious by camping standards. You’re in the field all day and you’re dirty and tired. But you can take a shower. And when you’re finished, someone has cooked you a meal.”

At Laguna de Terminos, UC researchers are working to collect clues about the ancient Maya before they are lost to development. Many of the wetlands are being drained or plowed up for grazing pastures.

Dunning said ironically these low-yield pastures provide far less economic value to today’s farmers than the seeming bounty of crops the ancient Maya derived from them more than 1,000 years ago. Their study warns the land-use practices are causing environmental damage to some of these valuable wetlands. Dunning said:

“It’s a shame because the grazing isn’t particularly good. The economic production from that land use is minuscule compared to what was produced by the Maya.”

Provided by: Michael Miller, University of Cincinnati [Note: Materials may be edited for content and length.]