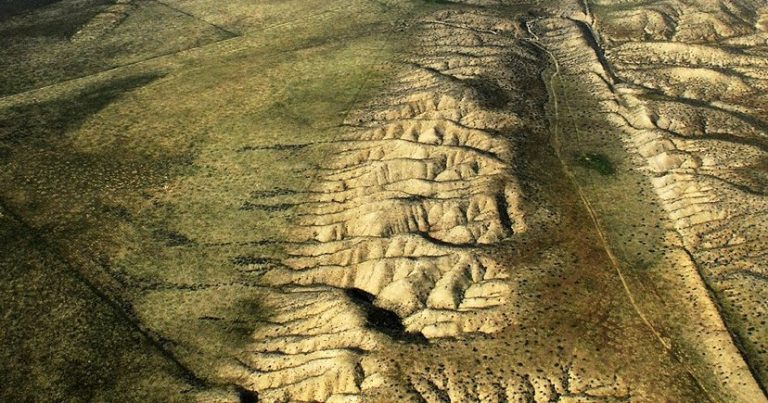 Aerial photo of San Andreas Fault looking northwest onto the Carrizo Plain with Soda Lake visible at the upper left. (Image: via wikipedia / CC BY 3.0)

There have been no major ground-rupturing earthquakes along California’s three highest slip rate faults in the past 100 years. A new study published in Seismological Research Letters concludes that this current “hiatus” has no precedent in the past 1,000 years.

U.S. Geological Survey researchers Glenn Biasi and Kate Scharer analyzed long paleoseismic records from the San Andreas, San Jacinto, and Hayward Faults for the past 1000 years to determine how likely it might be to have a 100-year gap in earthquakes across the three faults. They found that the gap was very unlikely — along the lines of a 0.3% chance of occurring, given the seismic record of the past 1,000 years.

The results emphasize that the hiatus is exceptional, and that the gap isn’t some sort of statistical fluke created by incomplete paleoseismic records, said Biasi. The analysis also indicates that the next 100 years of California earthquakes along these faults could be a busy one. He noted:

“If our work is correct, the next century isn’t going to be like the last one, but could be more like the century that ended in 1918.”

Between 1800 and 1918, there were eight large ground-rupturing earthquakes along the faults, including the well-known 1906 earthquake in San Francisco and the similar-sized 1857 rupture of the San Andreas in southern California, but nothing so large since. Biasi said:

“We know these big faults have to carry most of the [tectonic] motion in California, and sooner or later they have to slip.

“The only questions are how they’re going to let go and when.”

The three faults and their major branches analyzed by the researchers accommodate the majority of the slip between the Pacific and North American plate boundary. Paleoseismic records from the faults predict that there would be three to four large ground-rupturing earthquakes (magnitude 6.5 or larger) each century.

Biasi and Scharer examined the best available paleoseismic records from sites along the three faults to determine whether the current gap could be explained by missing data or incorrect radiocarbon dating of past earthquakes. From these data, they calculated the probability that there would be a 100-year gap in ground-rupturing earthquakes across all three faults. Biasi said:

“Our paper confirms that this hiatus is very improbable and it’s our view that our efforts will be better spent considering explanations for this, rather than trying to bend the data to make the hiatus a ‘statistically improbable but could happen’ kind of thing.

“We just have not had earthquakes that past records predict that we should have had.”

He likened the hiatus to what a person might see if they pulled up a chair alongside a freeway to count passing cars, saying:

“You might say that a certain number of cars per hour is kind of representative, and then something happens and you go ten minutes of seeing no cars. If it’s just ten minutes, you could say it was a statistical fluke.

But if the freeway stays clear of traffic for a long time, “the other reason there might be no cars is that up around the bend, there’s a wreck.”

The researchers would like more seismologists to focus on the reasons — “the wreck around the bend” — behind the current hiatus. Biasi said:

“It’s possible that among them they just wrung out—in the sense of wringing out a dishrag—a tremendous amount of energy out the system.”

There may be stronger long-range interactions between the faults than suspected, or there may be unknown features of the mantle and lower crust below the faults that affect the probability of ground-rupturing earthquakes, he noted.