Penn Station, Old and New, and the Hope for the Ideal Restored 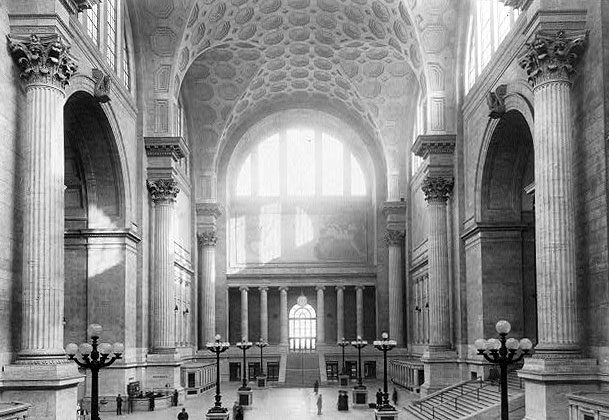 Penn Station, in the Chelsea district of Manhattan, has been the brunt of harsh criticism since its opening day in 1968. Its dark, confined, and noisy interiors make the experience of traveling through it worth forgetting.

The bits and pieces remaining of the old Pennsylvania Station are a somber reminder of what it once was — a crowning jewel of American sophistication in engineering and aesthetics married with the classical ideals of ancient Greece and Rome. As plans are underway for the current Penn Station to redeem itself, and as architecture firms’ proposals hope to emulate the grandeur of the original Pennsylvania Station, it might be useful to reflect on what the old station achieved.

More than a hundred years ago, Alexander Johnston Cassatt, the president of the Pennsylvania Railroad, wanted to build a rail station fitting New York City in its ambition to become an international hub of culture and commerce. To achieve his goal, rail tunnels had to be dug through the thick clay and mud under the Hudson and East rivers in a daring and dangerous attempt to connect New York City with the rest of the United States.

Charles Follen McKim of the firm McKim, Mead, and White, the architect of the old Pennsylvania Station, took inspiration from the ancient baths of Caracalla in Rome. He emulated the archways, open spaces, and columns to create one of the grandest architectural achievements in America. The structure was lofty, eloquent, and grand, but not ostentatious.

When it opened in 1910, people were awestruck by the 150-foot-high ceiling of the station, rimmed with marble holding a glass ceiling supported by steel columns riveted together. The building personified the character of New York City with its sense of a burgeoning empire built on self-determination.

Over time, however, the Pennsylvania Railroad was hit hard when other modes of transportation gained popularity, and the weakening railroad industry led to the decision to demolish the station in the 1960s.

And the world of architecture had not stood still either. After World War II, the modernist art movement and its theories fully enveloped the schools of architecture. Abstraction, cubism, and post-modern art were in complete opposition to the language of the classical arts.

Taking up the revolutionary ideas of art, Swiss-French modernist architect Le Corbusier famously wanted to raze Paris and build a new world of pure functionality, stacked with boxes for humans to dwell in.

Le Corbusier did not succeed in Paris, but his ideas and theories on art and architecture became mainstream and he succeeded with the rest of the world. His vision permeates the steel and glass structures commonplace in our modern cities.

According to a classical perspective, the utilitarian utopia Le Corbusier envisioned cast out as heretical the beauty and the intrinsic value of life. In his monotonous towers, we lost our sense of humanity and our higher aspirations.

The current Penn Station is a modern work inspired by the objectivist thinking made popular by the Bauhaus movement in the 1930s, which was in turn, influenced by Le Corbusier. The Bauhaus movement aimed to reduce humanity to the sum of its labor with its mantra of “form follows function.”

Following this creed, the once lofty but very human aspirations of Pennsylvania Station were lost to steel and concrete meant solely to move passengers from one destination to another.

Vincent Scully Jr., the Sterling Professor Emeritus of the history of art, in architecture, at Yale University, lamented the change, according to his book American Architecture and Urbanism: “One entered the city like a god; one scuttles in now like a rat.”

As the old Pennsylvania Station was reduced to rubble, the New York City Landmarks Preservation Commission was established to prevent other landmarks from sharing the same fate.

Classical architecture and the search for the ideal

In its search for perfection, the classical world offered a foundation for the arts of the Western world. How we think about things, abide by rationality and reason over our fleeting desires and emotions, our aesthetic understanding of symmetry, and the ideal to strive for perfection still resonates today.

Inasmuch as I feel the tension lifted from my shoulders upon entering a forest, I feel that same sense of belonging and home in the echoes of classical architecture that McKim aspired to reproduce. It is a style that tapped into over 2,000 years of continuity in knowledge and understanding, not only of architecture, but also of the human condition and our struggle to find the answers to the big questions in our lives.

The buildings of ancient Greek architects served their function, of course, but were also works of art that elicited a sense of awe and calmness, giving dignity to human life and a sense of eternity.

Classical architecture takes into consideration nature and completely harmonizes with it, as it uses the same measurements and workings of the natural world. We don’t feel alienated or wish to escape these buildings but to become a part of them.

I sat down with Eric Wheeler, an architectural historian and teacher, in Portland, Oregon, to grasp his knowledge of classical architecture and its roots, as we flipped through drafts of ancient Greek and Roman building plans.

“The human body is perfection,” said Wheeler, who previously worked as a historian and researcher for the River Architects’ team in Wisconsin. “It was a higher wisdom that the Greeks tried to understand. These understandings helped them materialize the Ideal Form pulled out from the divine and brought it into their culture. Truth, goodness, and beauty were the aspirations and the ideal for Greek society.”

Wheeler stated: “The ideal was mirrored in ancient Greek architecture under the three precepts of form, function, and beauty. With the Parthenon and the Greek temples, the Greek architects wished to build structures worthy and sacred enough to consecrate their deities.”

The architecture was noble, bright, airy, fearless, and above all, it emanated a sense of eternity. “It was the striving to manifest heavenly ideals in stone and wood,” he said.

Our constant striving for the modern has separated us from the past and from what it has to share. The ache still in our hearts from the removal of the old Pennsylvania Station may serve as a lesson: If something works perfectly, don’t touch it.