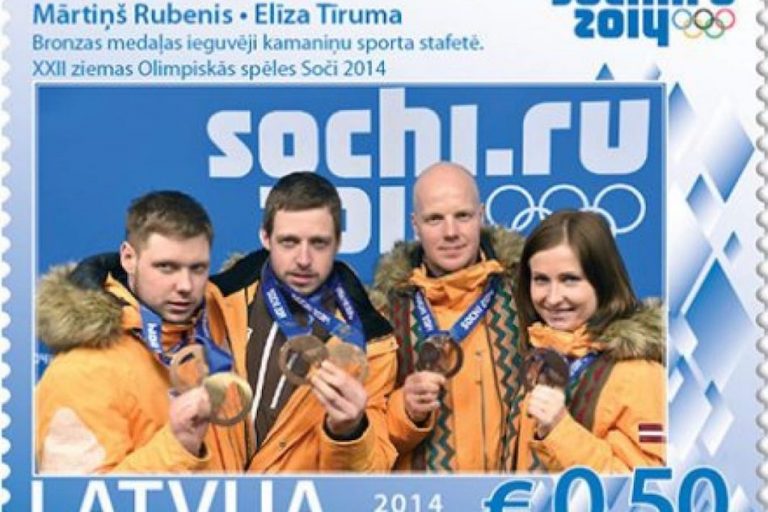 The Latvian government published a special commemorative stamp in recognition of its bronze medal winners in the group luge relay competition at the 2014 Winter Olympics. (Image: via Martins Rubenis)

An Olympic athlete’s search for cultivation

Long-term high-intensity competitions wore out his body. He said: “When I was in my twenties, I felt like I was 45 years old. My back pain and muscle aches reduced my performance on the court.” He urgently needed a way to improve his health and began to search for a solution in Chinese culture.  He had longed for Chinese civilization from childhood. Finally, he found Falun Dafa in the spring of 2005, and also then understood the purpose of life.

The Olympic athlete recalled: “After the first exercise practice, I felt that there was strong energy passing through my body. That feeling was awesome. At that time, there was a lot of sweat; it was like doing physical training. My body changed a lot and I felt very good. After about a month and a half of persisting in the practice, the pain in my back and other parts of my body disappeared.” Since then, he hasn’t required any drugs or massage therapy.

Rubenis followed Falun Dafa’s principles of Truthfulness, Compassion, and Forbearance and sought to become a better person. Gradually, he found that everything around him changed a great deal. He became open and friendly, and, at the same time, he found the competition a wonderful journey to overcome himself.

Rubenis told reporters that he was quite selfish in the past. For example, he always hid his well-designed sleds and stopped other people from seeing them. He did not do this after practicing Dafa. Before the games, he brought the sled out so that anyone could look at it. He realized that he should be more selfless because when he shared it with others, he would get new knowledge and inspiration for new ideas.

After retiring as an Olympic athlete, he served as the coach of the Latvian National Sports Team and was also responsible for designing a new type of sled. The transition from athlete to coach was challenging. It was difficult to adapt at first; but when he followed the principles of Truthfulness, Compassion, and Forbearance, his thoughts became clear and he knew how to do it. He said: “I feel that I am becoming more modest and selfless. It is not just for myself, but for helping others achieve their goals. Although I am behind the scenes, my duties are more important than before.”

Now, when he encounters a problem, he will find his own shortcomings. Before practice, he always thought that it was troublesome. Now, he sees these are opportunities, and looking inside can help him to improve.

Outside the stadium, Rubenis is passionate about human rights. He actively tells the public about Falun Dafa, also known as Falun Gong, and calls on the Chinese Communist Party (CCP) to stop persecuting Falun Dafa. He feels that Dafa is invaluable. He wants to tell everyone: “I have indeed experienced all the miracles. No matter what your experience or what background you have or what country you are born in, you will benefit from Falun Dafa.”