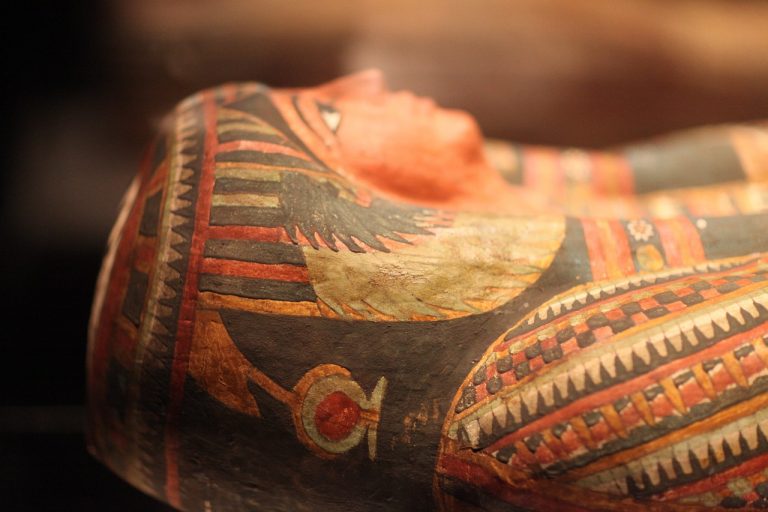 When talking about Egyptian mummies, people typically think of the practice as a means for preserving human corpses. (Image: via pixabay / CC0 1.0)

When talking about Egyptian mummies, people typically think of the practice as a means for preserving human corpses. But the ancient Egyptians not only mummified human beings, but they mummified animals as well. Recently, a team of researchers uncovered an Egyptian tomb that housed several mummified mice, cats, falcons, and other creatures.

The animal mummies date back to the Ptolemaic period and were discovered in the town of Sohag, approximately 230 miles from Cairo. Authorities call the region one of the most historically rich places in Egypt. The animal mummies were found surrounding two mummified human beings.

The burial chamber containing the mummified animals consists of two rooms and is covered with paintings that depict funeral processions and people working in fields. “It’s one of the most exciting discoveries ever in the area,” Dr. Mustafa Waziri, Secretary General of the Supreme Council of Antiquities, said in a statement (CNN).

The entrance to the burial ground was accidentally discovered after authorities arrested a group of criminals. They were apparently trying to smuggle artifacts from a side of the hill. An investigation uncovered the burial ground, which was later given over to Waziri and his team for exploration.

According to experts, the site is more than 2,000 years old and belongs to a civilization that lasted for almost three centuries until around 30 B.C. when conquerors from Rome ravaged the region. The tomb is believed to have been constructed for a senior official named Tutu and his wife. The paintings depict Tutu receiving and offering gifts to various gods and goddesses. Inscriptions on the wall portray his genealogy.

Since the 2011 Arab uprising, the political instability in the region has scared off tourists due to heightened security risks. The antiquities ministry hopes that the new discovery might give a boost to local tourism.

It’s not just mummified animals that archaeologists have dug up from Egypt of late. Recently, the mysterious “Tomb of the Warriors,” located in Deir el Bahari, was excavated. Discovered in 1923, the tomb was sealed off till now. The bodies of 60 soldiers were mummified and buried in the tomb. It is believed that the soldiers were part of a group who fought a violent battle in Egypt almost 4,000 years ago.

The incident happened after the end of the reign of Pharaoh Pepi II. “As Pepi II’s influence waned toward the end of his rule and local governors became more and more powerful, their burial chambers became bigger and more lavish. One governor’s tomb, built in the Qubbet el Hawa necropolis after Pepi II’s death, contained inscriptions that hinted at the conflict emerging between political factions, describing social disruption, civil war, and lack of control by a single administration,” according to Live Science.

Several years after Pepi’s death, the society crumbled and people turned against one another, irrespective of rank. This is evident from the fact that Pepi’s tomb was raided shortly after he was buried, something that was considered impossible at a time when pharaohs were seen as gods. Records of the time show that people were even eating their children to stay alive after a harsh famine had driven the society to extreme starvation.

Several of the mummified bodies showed signs of trauma, indicating that the soldiers were badly hurt during battle. Some of their skulls were pierced or broken. Many of the bodies also had arrows in them.