Using lightning to Measure the Density of the Upper Atmosphere 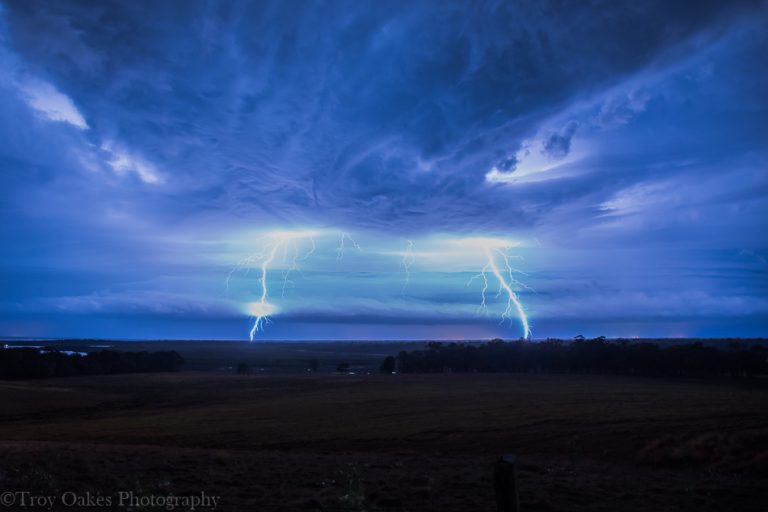 It can also affect a wide range of military technologies, including improving the accuracy and resolution of low-frequency navigation systems. (Image: via Troy Oakes )

No one has a firm grasp on the dimensions and activity of the lowest part of our upper atmosphere, known as the ionospheric D region, because it’s literally a moving target. Located 40 to 60 miles above the Earth’s surface, the region moves up and down, depending on the time of day. And it’s nearly impossible to monitor: It’s too high for airplanes and research balloons, too low for satellites, and not dense enough for direct radio sounding.

Understanding the D region does more than benefit scientific research. It can also affect a wide range of military technologies, including improving the accuracy and resolution of low-frequency navigation systems. Such systems can be alternatives to GPS and are of growing importance to the military.

The solution, researchers discovered, is lightning storms. By measuring the electromagnetic waves produced by lightning, researchers were able to retrace the lightning’s path to diagnose the electron density of the region.

During a storm, a flash of lightning sends out a wide range of electromagnetic frequencies. The speed of those waves changes based on the conditions of the upper atmosphere. Previous theoretical research measured the electromagnetic waves to gauge the lightning’s origin. Study author Mark Golkowski, Ph.D., associate professor of electrical engineering and bioengineering in the College of Engineering, Design, and Computing, said:

“I kind of reversed the problem.

“If I knew where lightning was coming from, then I could accurately diagnose the upper atmosphere along the path that it traveled.”

Golkowski measured the lightning’s group velocity — the speed at which the energy of a wave travels. Specifically, Golkowski measured the speed of the extremely low frequency (ELF) component of the waves. The group velocity of ELF waves are significantly less than the speed of light and the waves are more affected by the electron density profile of the atmosphere. By knowing their traveled path, Golkowski was able to diagnose the D region.

He used data from Vasaila, a global provider in environmental and industrial measurement, that tracks the low-frequency range of about 80 percent of the world’s lightning. Golkowski also leveraged his partnership with the Worldwide ELF Radiolocation Array (WERA), which operates three international receivers — in Colorado, Argentina, and Poland. Because there are 40 to 100 lightning strikes every second, Golkowski was able to pull in massive amounts of global data.

A game changer for military security and space research

By measuring ELF waves, Golkowski was able to provide a large-scale diagnostic of the D region, measuring its density, height, and how fast it changes — a game changer for near-Earth space research, but also military security.

The high resolution and accuracy of today’s GPS navigation — in our cars, on our phones, on our wrists — relies on satellites 12,000 miles above the Earth’s surface. The distance these high-frequency signals have to travel weakens them and makes them vulnerable to jamming or spoofing, deceiving a receiver by broadcasting false signals. This is nnoying for road trippers and potentially catastrophic for ground forces.

Old-school, low-frequency global navigation, however, relies on ground transmitters that bounce a signal from the lower upper atmosphere, ping-ponging it around the world to users. Such systems avoid the 12,000-mile trip necessary to reach a satellite and are much more resistant to jamming and spoofing. But the unknown state and activity of the upper atmosphere limited accuracy to about a one-mile radius, which was fine for the ships and submarines that used it to navigate the ocean.

Now, researchers can use Golkowski’s findings to improve low-frequency navigation resolution and accuracy, which could make it a critical back-up to today’s technology.

Beyond advances to low-frequency navigation systems, the research will also impact a wide range of near‐Earth space research. Golkowski said:

“The D region is also where the plasma state of outer space begins.

“This technique could answer, in terms of basic science, the effect of a solar flare on our upper atmosphere. The same goes for the physics behind any unexpected disturbance like a solar storm or solar eclipse.”

Provided by: University of Colorado [Note: Materials may be edited for content and length.]