The Exotic Dai People of China 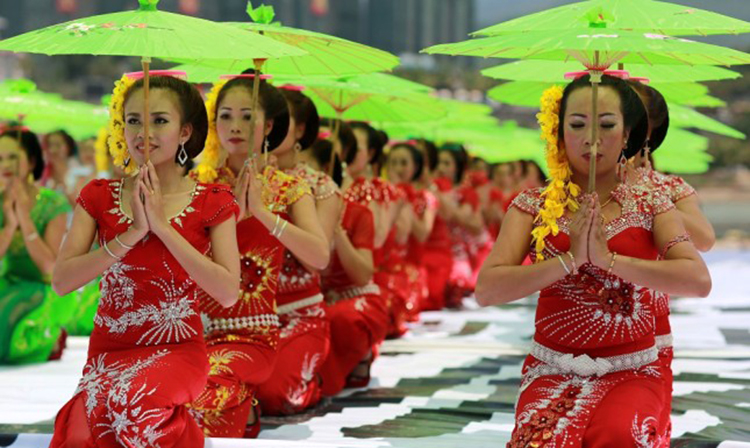 The Dai people are one of China’s ethnic minorities. (Image: YouTube / Screenshot)

The Dai people are one of China’s ethnic minorities. They are traditionally known as rice cultivators of the valleys — like the Shan, Lao, Ahom, and Thai people. Most of them live in the Xishuangbanna Dai Autonomous Prefecture in southern Yunnan Province, as well as in the Jingpo Autonomous Prefecture and Dehong Dai.

Dai ethnic history dates back to the ancient tribe of ethnic groups known as Baiyue. In the early days, the Dai people were divided into three kingdoms — the Mong Pa Kingdom of the now-Sichuan Province, the Mon Loong Kingdom of the Southern Yellow River region, and the Mong Yio Kingdom of the Yangtze River.

Scholars believe that the Dai people are one of the first ethnic groups to employ oxen to help till rice fields. Ancestors of the present-day Dai people were members of the Shan Guo, a semi-unified political organization of Dai people. However, they continued to split apart into tribes, and by the 12th century, these small groups exclusively lived by their own rules.

It was also during this period that Pa Ya Zhen, a Dai chieftain, brought all tribes together to build the kingdom of Mengle, with Yunnan Province (Jinghong in the past) as its capital. After the formation of the People’s Republic of China (PRC), 90 percent of the Dai people would come to inhabit areas deemed as autonomous regions within the PRC.

Singing and dancing are the heart and soul of Dai art. Various ethnic groups in China recognize the Dai people’s achievements in these areas.

The Peacock Dance is a particular favorite among the Dai. One of the reasons for this is because the bird is their symbol of happiness, fortune, and goodwill. Usually, it is performed during New Year celebrations and other Buddhist festivals. To mimic strutting movements of the peacock, performers move their waists and arms in soft undulations. They wear clothing resembling the fowl-like bird. “Graceful” and “elegant” are words that people who have seen the beautiful display use to describe the Peacock Dance.

Another popular Dai dance is the Elephant-foot drum dance, which is typically a dance for men. The elephant is a symbol of bravery, sacredness, and diligence to the Chinese minority. Of course, it wouldn’t be the Elephant-foot drum dance without the instrument it’s named after. This instrument is made from carved ceiba or mango trunk covered with cowhide, which actually looks like an elephant foot. Depending on the size of the instrument, the performer’s dance varies.

For example, performers handling short elephant-foot drums play with short and bright movements, those with the medium size drums perform with vigorous, sweeping movements, and the dance accompanied by the long drum appears graceful and charming. Other accompanying instruments to liven up their traditional music are the bronze gong, clarinet, and hulusi.

Dai cuisine is almost synonymous to Yunnanese cuisine. The ingredients and flavors of this cuisine are definitely rich. It isn’t unusual to see flowers, ferns, algae, and even insects on plates, making the group’s cuisine an odd and excellent choice for foodies who are yearning to experience exotic meals. In addition to that, Dai cuisine is typically spicy to the core. Popular dishes are Ghost Chicken (Guji), whose main ingredient is usually a black-skinned chicken, stir-fried wild boar (Chaoyezhurou), and cold vegetables with spicy dipping sauce (Nanmi).