A Short History of Moorish Influence in Europe 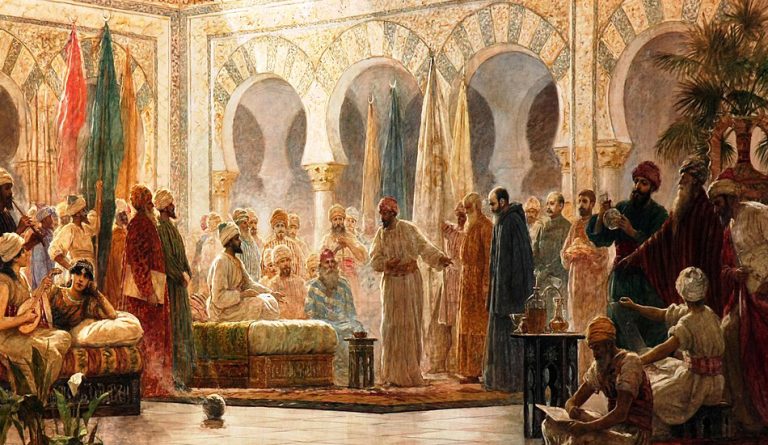 The Moors conquered and kept large parts of Spain under their control for about eight centuries between A.D. 711 and around A.D. 1492. (Image: wikimedia / CC0 1.0)

In medieval Europe, Muslims were commonly known as Moors. Since initially, most of the Moors coming into Europe were from Africa, the term came to be associated with African Muslims. But later on, the term Moors was used for Arabs. And during the European colonization of Asia, identities like Ceylon Moors, Indian Moors, etc. also came into existence.

The Moorish conquest of Western Europe began in the 8th century A.D. During the early decades of this period, Moors crossed the Strait of Gibraltar and started their conquest of the Iberian Peninsula. It was a Berber commander named Tariq bin Ziyad who led the attack. Berbers are indigenous North African tribes.

During this period, Iberia was a part of a Hispanic kingdom ruled by the Visigoths. For the next eight years, Tariq led a military campaign that brought the vast majority of the Iberian Peninsula under Moorish rule. This served as the basis of a series of attacks against Europe over the next few centuries.

The Moors kept large parts of Spain under their control for about eight centuries between A.D. 711 and around A.D. 1492. This had a lasting impact on Spain. Islamic architecture and literature came to dominate Spanish life, the effects of which are still visible today. Spain’s greatest author Miguel de Cervantes used a Moorish character to narrate the story of the central character in his famous book Don Quixote.

Despite such influences, it is undeniable that the Moorish conquest of Europe was a bloody affair. About 10,000 men entered Spain in A.D. 711. They went on to commit acts of great violence against the natives. Anyone who refused to convert to Islam was killed or punished in some other way. The religious persecution was so violent and effective that by A.D. 1200, almost 5.6 million of the Iberian Peninsula’s 7 million people had become Muslim.

During its peak, Cordova, the center of Moorish territory in Spain, was the most modern city in all of Europe. The streets were well-paved and pedestrians could walk on the raised sidewalks. At nighttime, several streets were often illuminated with lamps. Cities like London or Paris featured paved streets and lamps only centuries later. Cordova also boasted about 900 public baths.

The Moors created a huge impact in the field of education. Europe at that time only had two prominent universities. But within the Moorish territory of Spain alone, almost 17 universities existed. Education was usually available to all. During the 10th and 11th centuries, Moorish Spain also had almost seventy libraries. This was at a time when public libraries in Europe were non-existent.

The effort to build libraries and institutions of higher learning in Moorish Spain was largely led by the members of the Umayyad Dynasty, who wanted to be perceived as intellectual rivals to the Abbasids in Baghdad. The Arabic number system replaced Roman numerals and introduced a new system of mathematical calculation in the region.

Agriculture under the Moors underwent huge development. Many new crops like sugarcane, apricots, oranges, lemons, ginger, peaches, pomegranates, cotton, saffron, etc. were introduced. Prior to the arrival of the Moors, native farmers used the Roman irrigation system. Moorish influence led to the establishment of a large number of wells, reservoirs, and canals that redirected water from one region to the other. As a result, agricultural production in the region surged.