Grace Strobel: Meet The Brave Model With Down Syndrome 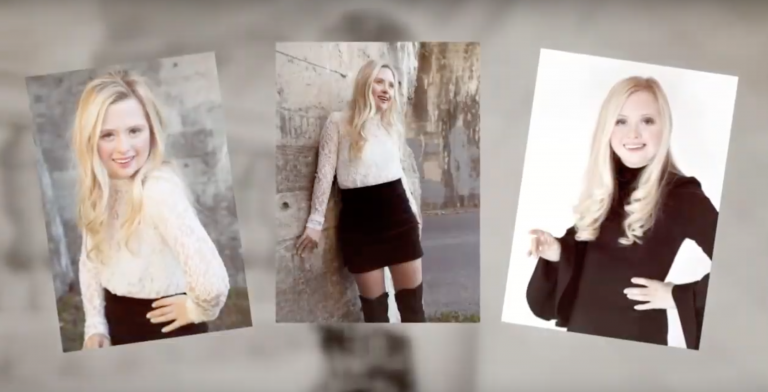 Grace Strobel is a 22-year-old woman who dreams of being a top model. (Image: YouTube/Screenshot)

Grace Strobel is a 22-year-old woman who dreams of being a top model. However, unlike peers, Grace has to grapple with Down syndrome. But this has not stopped the aspiring model from putting her all into the profession. And the modeling agencies have apparently taken note of Grace, thanks to her indomitable spirit.

A life full of challenges

When Grace was born, it was concluded that she would never be able to read and write like regular people because of Down syndrome, a genetic disorder caused by the presence of a third copy of chromosome 21 in the DNA. Because of her inevitable developmental and intellectual delay, a counselor told Grace’s parents, Linda and Jeff Strobel, that it would be best to put their daughter under the care of professionally run institutions that specialized in handling such children.

However, Grace’s parents had other plans. Linda and Jeff took their daughter home instead of putting her with the “professionals.” Her mother read everything about ways to stimulate brain development for babies and helped her newborn to build neck muscle and tone. Linda homeschooled Grace, dedicating four to five hours every day to teach her how to read and write. By the age of five, little Grace had already learned a few words and how to read.

Grace got her first taste of social interaction at school when she was eight. But she was constantly moved from school to school since Linda believed Grace wasn’t receiving a proper education. Plus, not everyone understood Grace as her mother did. She was also harassed by other kids on several occasions. When Grace was 20 years old, a group of students in the kindergarten she volunteered at made fun of her because she couldn’t open their lunch boxes. This made her cry for four consecutive days. Still, Linda kept up hope that Grace could turn negative experiences into something positive.

One day, while doing research on Down syndrome, Grace spotted the story about a model with Down syndrome. Innocently, she asked mom if she could be a model as well. Her mother replied that anything is possible.

After that, Linda hired a photographer to take photos of her daughter. Grace got dressed, stood in front of the camera, and in the flashes of the camera, she was an entirely new person. Her smile radiated, her poses were natural, and she wore a charming and innocent aura alongside her beautiful outfits. Her modeling photos went viral online, sending waves of inspiration to people. This was the beginning of Grace’s modeling career.

Linda received Ola Hawatmeh’s contact from a friend. Linda wrote to the St. Louis fashion designer explaining her daughter’s situation and how she really wanted to become a model. Wanting to help Grace, Hawatmeh agreed to make the 22-year-old’s dream come to life. He gave Grace runway lessons, homework, and even made a custom dress for her walk for a Fashion Week show in Atlantic City.

On that day, she was the finale of the show. Draped in a long, white dress, she received the loudest applause from the audience. “When I look at Grace, I see courage and beauty,” the fashion designer said. Since then, Grace’s story has been featured in multiple magazines. She even became the cover for one of the Chesterfield Lifestyle Magazine issues. Local TV stations are also asking her for interviews.

Grace is set for another walk in Hawatmeh’s show during the New York Fashion Week this coming fall. Aside from being a model, Grace Strobel also gives presentations, which she calls the #TheGraceEffect, educating people about Down syndrome in various schools.