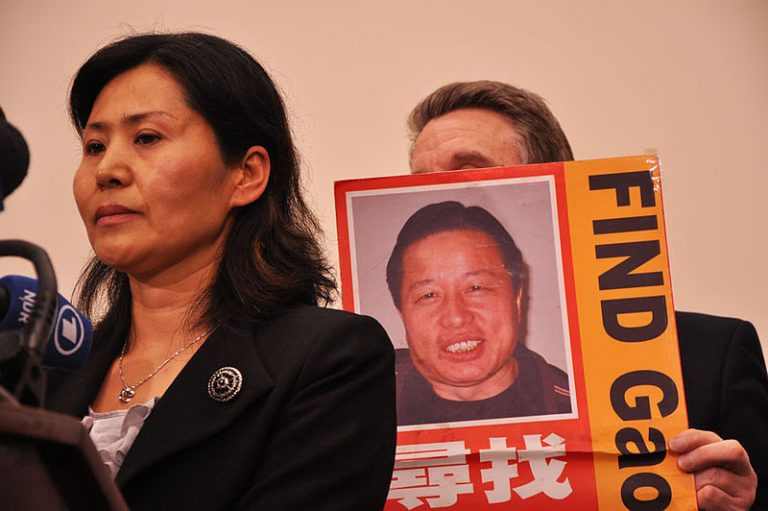 Amnesty International has called for a letter campaign to pressure the Chinese government to release respected human rights lawyer Gao Zhisheng who has been forcibly disappeared for nearly two years.

In an urgent action alert, Amnesty International (AI) called upon the public to write letters to the Minister of Public Security, Zhao Kezhi, to call for Gao’s freedom.

“No information about [Gao’s] whereabouts are known since he was taken away from his home in Yulin City, Shaanxi, northwest China, on 13 August 2017,” said the alert.

“Gao Zhisheng previously shared his experience of repeated torture in detention as a result of his work, raising fears that he is at high risk of torture and other ill-treatment or even death,” it said.

The alert gave an example of a letter that people could use in writing to Zhao. It included details of how the Christian lawyer was forcibly disappeared and how communist officials have denied information of Gao’s current situation to his family and lawyers.

AI’s alert pointed out how Gao endured torture and other depravations during past imprisonment.

“A former prisoner of conscience, Gao Zhisheng previously shared his experience of previous enforced disappearance and repeated torture in detention as a result of his work, raising fears that Gao Zhisheng is at high risk of torture and other ill-treatment or even death,” said the example letter that AI released.

Like many rights lawyers in China, Gao has long earned the ire of the communist authorities for providing legal assistance to China’s most vulnerable, including house Christians, petitioners, victims of state corruption, and Falun Gong practitioners. As part of that, Gao exposed sexual torture by prison guards against people of faith, with certain concerns for Falun Gong practitioners.

Watch this episode of China Uncensored made a month after Gao disappeared on this occasion.

AI’s letter called on Zhao to: “Immediately and unconditionally release Gao Zhisheng if he has been detained solely for exercising his right to freedom of expression.

“And pending his release, immediately disclose the whereabouts of Gao Zhisheng, and ensure that he is not subjected to torture or other ill-treatment; and he has regular, unrestricted access to his family, lawyers of his choice, and medical care on request or as necessary.”

Gao’s wife Geng He told Radio Free Asia (RFA) that she still doesn’t know where he is.

“Since Gao Zhisheng was forcibly disappeared, the authorities have never informed his family where he is being held, neither have they provided an official document notifying them of his detention, or anything like it, let alone allowed his family to visit him,” said Geng, who now lives in the U.S. with the couple’s two children.

“The local police station just keeps passing the buck,” she said. “One minute they are saying Gao Zhisheng is being held in Yulin; the next they say he’s being held in Jia county, or in Beijing.”

“Meanwhile, officials have been treating both Gao and Geng’s relatives as ‘guilty by association,’” she said.

“They have demanded that my family report to their local police station on a weekly basis and sign a report,” she said. “On one occasion, one of my relatives saw the content of the report they had to sign, and it referred to me and my children as fugitives.”

Watch Gao and Geng’s daughter Grace at the Oslo Freedom Forum tell the story of her father’s arrest in 2009 and the subsequent separation of her family.

In her interview with RFA, Geng said that while Gao’s actual birthday is on April 20, she typically celebrates it on the same day as their daughter’s birthday, April 17.

“This year, the theme of his birthday is wanting him to come home,” she said.

Geng and their children fled China in 2009 after an earlier episode of Gao being disappeared by the state. The first time Gao was forcible disappeared was in 2006.

Gao had his lawyer’s license revoked and his law firm was shut down by the state in 2005. AI said that this was a direct result of his open letters to the government calling on them to stop religious persecution, including the persecution of Falun Gong practitioners.

Before he was targeted by the state, Gao was named one of China’s top 10 lawyers in 2001.

See what author and former Canadian politician David Kilgour has to say about Gao: