The 4 Holy Mountains of Chinese Buddhism 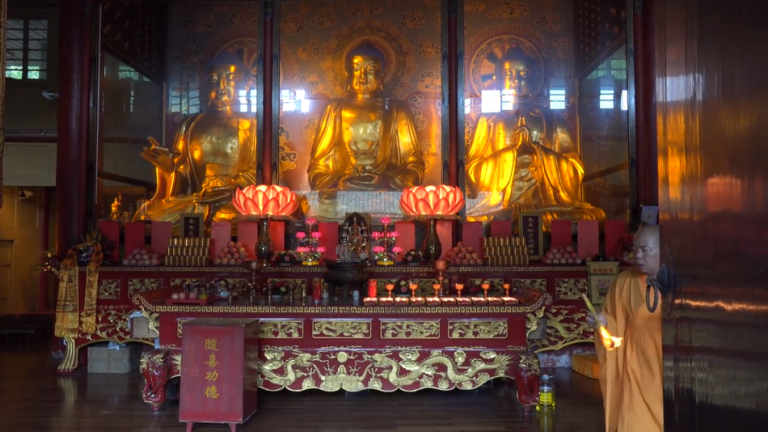 Since ancient times, Buddhism has been a huge part of China, both culturally and spiritually. (Image: Screenshot via YouTube)

Since ancient times, Buddhism has been a huge part of China, both culturally and spiritually. Four of the country’s mountains have actually been sacred grounds for the religion. These include Mount Wutai, Putuo, Emei, and Jiuhua. Here is a brief introduction of these famous holy mountains of Chinese Buddhism for your knowledge.

Located in northeastern Wutai County in Shanxi Province, Mount Wutai, also known as Qingliang Mountain, is designated as a UNESCO World Heritage Site. It has the longest Buddhist history among the four major Buddhist mountains. Prior to Buddhism, it was a holy place for Daoism during the Han Dynasty.

The mountain started getting a Buddhist identity when Manjusri Bodhisattva postponed Buddhahood and used it as his dwelling place to work for worldly welfare during the Wei Dynasty. And during the Tang Dynasty until the 12th century, Mount Wutai served as the home for the Huayan school of Buddhism, which taught the tenets of its faith to Chinese and Japanese.

Tibetan Buddhism was introduced in the sacred mountain in the late 13th century under Mongol rule. This positioned the mountain’s monastic centers as a bridge between the Chinese court and its Mongol and Tibetan vassals during the Qing Dynasty. Today, a few of the temples in the mountain still stand, including the main halls of Foguang Temple from A.D. 857 and the Nanchan Temple.

Just 90 miles away from Sichuan Province in Chengdu City stands Mount Emei. The highest of the four major Buddhist mountains in China, it serves as the home of the sacred building — the Golden Summit. The building is known for its four wonders — the sunrise, the sea of clouds, the Buddhist Halo, and the divine light. A religious legacy of 2,000 years has been kept safe within the numerous temples dotting the mountain, making it a popular destination for pilgrims.

Chinese Buddhists hold Mount Emei in high regard since its land was witness to the establishment of Buddhism in China. The very first Buddhist temple, the Guangxiang Temple, was built here. Later known by its royal name Huazang, the structure has been rebuilt and refurbished throughout the years. Huazang’s original appearance is still preserved and respected. Other notable sacred structures in Mount Emei are the Maitreya Hall, the Ten-faced Puxian Stupa, and the Bodhisattva Samantabhadra Hall.

Not far from Mt. Huanshan (Yellow Mountain) is Mount Jiuhua, located in Qingyang County in Anhui Province. Historical records point to A.D. 401 as the year Buddhism was introduced in the region. What makes this place special, especially to the locals, is the story of Jin Qiaojue, a Korean monk. Legends say that the monk arrived in Mount Jiuhua in the year A.D. 719. For 75 years, he practiced Buddhism. In A.D. 794, he attained Nirvana, the ultimate spiritual goal of Buddhists to release themselves from samsāra (in layman’s terms, reincarnation).

As a result, he gained the respect of locals who regarded him as the Earth Buddha, giving birth to religious rituals in the mountain to worship the god of Earth. Aside from this story, Mount Jiuhua boasts of beautiful structures with memorable architectural designs. Sacred buildings such as the Huacheng Temple, Longevity Hall, and Tiantai Zhending Temple are among the popular sights in the mountain.

Mount Putuo at the Eastern Hangzhou Bay in Zhejiang Province is a place dedicated to Guanyin. The mercy goddess is one of the most beloved Buddhist divinities. Mahayana Buddhists believe that when one of their people die, Guanyin places the departed soul in the heart of a lotus and sends it to Sukhāvatī, the pure land of Amitābha in the west. Many legends exist about its main temple, the Guanyin Temple.

One prominent story is about a Japanese monk sailing back to Japan with the Guanyin statue. According to the story, the monk named Huie initially didn’t make it back to his country because an impossibly giant iron lotus flower in the Lotus Sea near Mount Putuo blocked his voyage. One night, he dreamed of a monk telling him to put the Guanyin statue on Mount Putuo so that he could get back to Japan. Huie followed the advice and made a temple dedicated to the goddess. He eventually returned safely to his country. Other temples to visit at Mount Putuo are the Fayu Temple, Puji Temple, and the Huji Temple.