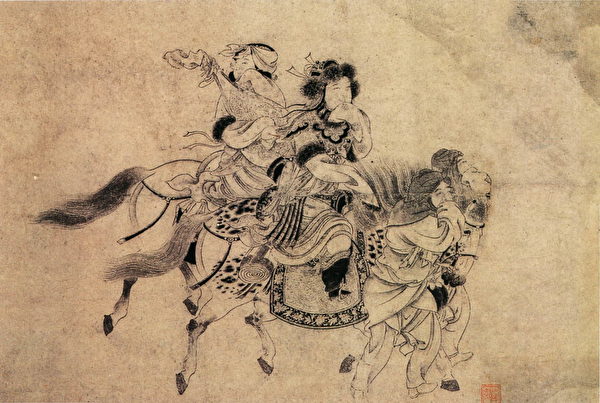 Feng Liao had political insight and generosity, and helped to bring unity between the Han people and the region’s various minority groups. (Image via The Epoch Times)

It certainly was a unique sight to behold — a woman dressed in Han Dynasty clothing, an Imperial Decree in hand, traveling by horse-drawn carriage… This woman, who had begun life as a humble maidservant, went on to make history by becoming the first official diplomat to the Western Regions — the regions of Central Asia, west of the Yumen Pass, through which the Silk Road passed.

It all began around the time of the Han-Xiongnu War (133 B.C. to A.D. 89) — a series of military conflicts that erupted as the Xiongnu Tribe invaded the Han territory. In response, the Han Emperor increased military presence on the borders and tried to foster alliances with tribes in the Western Regions.

In 101 B.C., 17-year-old Princess Jieyou of the Han Dynasty was strategically married off to the King of Wusun — a nomadic country geologically important along the Silk Road, which is today’s Xinjiang Ili River Basin in Kazakhstan.

Fourteen-year-old Feng Liao, the maidservant to Princess Jieyou, accompanied her to Wusun on her bridal journey. The pair were as close as sisters.

Feng Liao was intelligent and eager to learn. She avidly studied the policies of the Han Court, as well as the people of the Western Regions. Within a few years, she had mastered their language and traditional customs, and often acted as the princess’ envoy.

Feng Liao had political insight and generosity, and helped to bring unity between the Han people and the region’s various minority groups. She was given the honorable title “Madame Feng” and later married an influential Wusun general who was in good standing with Prince Wujiutu, thus benefiting the Han.

Entrusted to settle a power struggle in Wusun

When the King of Wusun died, those in power divided into two factions — one side leaned toward allying with Xiongnu and the other with the Han. The Han Imperial Court hoped that Princess Jieyou’s son would become the new king; however, Prince Wujiutu — whose mother was a Xiongnu — seized power.

Fears arose that Wujiutu would allow Wusun to become a vassal state, thus bringing disaster to both Wusun and the Han. The Han Emperor thus ordered the urgent deployment of 15,000 troops — almost triggering a war.

However, the governor of the Western Regions advised the emperor to send Feng Liao to talk with Wujiutu, to persuade him to ally his kingdom with the Han.

Feng went alone to the camp in the Northern Region to meet Wujiutu, who wanted his mother to send him a number of Xiongnu troops.

“The Han and Wusun are like one family. Using the Xiongnu troops will cause a mutiny and going to war will cause the people to suffer. The generals will also lose their reputation. They would have sinned against Wusun for not putting its interests first,” Feng told Wujiutu.

“I don’t care about forming an alliance with the Xiongnu. All I want is to become the King. I hope you will advise the Han Court to confer me a small title,” he replied.

With courage, intelligence, and dignity, Feng successfully persuaded Wujiutu to change his course, thus avoiding war. “Feng Liao fixed the case” is a phrase passed down through history.

Discovering that Feng had successfully accomplished her mission, the Han Emperor summoned her back home.

Feng returned to her Han homeland, which she hadn’t seen for 40 years. The Emperor praised her for her loyalty, keen insight, and diplomacy, and appointed her the official envoy to Wusun.

Feng returned to Wusun with the imperial decree. She announced the Han Court’s wish to grant Wujiutu the title “Little King of Wusun,” while the late king’s brother would take the title “Great King of Wusun.”

In 51 B.C., the King of Wusun died and his son, Xingmi — Princess Jieyou’s grandson — took over. The princess had turned 70 years old and had returned to her homeland in Chang’an, together with Feng.

Under the new King, Wusun was in turmoil. King Xingmi had a weak character and ruled the kingdom ruthlessly. Feng, who still held Wusun in her heart, asked to return in order to help the young successor.

The Han Emperor sent a team of 100 soldiers to escort Feng, who was in her old age. It was the third time for Feng to return to Wusun. She negotiated for all the Wusun tribes to unite, and taught the policies of the Han Court to Xingmi, as well as how to govern the Kingdom. Xingmi gained wisdom, allowing Wusun to become prosperous again. The people lived in harmony, and the relationship between the Han and Wusun stayed positive.

Feng Liao’s heroic story of maintaining the peace at the border has been passed down through the ages and is remembered to this day.