Pompeo Lashes Out Against Continued Chinese Support for Maduro Regime 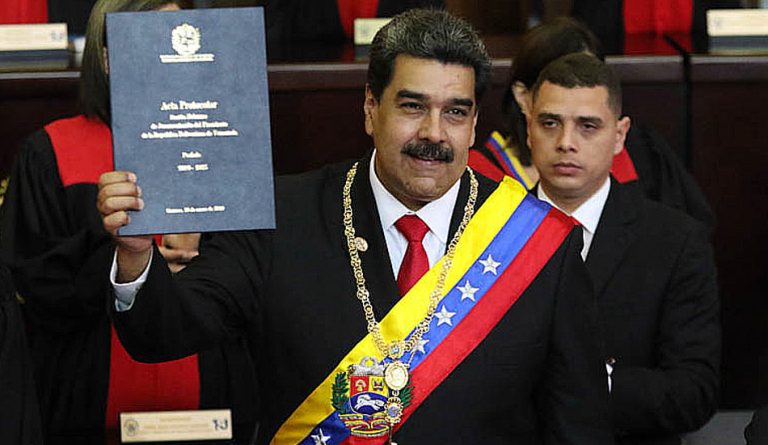 U.S. Secretary of State Mike Pompeo has lambasted the Chinese government for supporting the oppressive Maduro regime in Venezuela, accusing Beijing of pushing the Latin American country into chaos. Meanwhile, the Venezuelan government is reportedly increasing its military headcount.

“China’s bankrolling of the Maduro regime helped to precipitate and prolong the crisis in that country… I think there’s a lesson … to be learned for all of us: China and others are being hypocritical calling for non-intervention in Venezuela’s affairs. Their own financial interventions have helped destroy that country,” he said in a statement (The Guardian). Pompeo also termed Maduro as a “power-hungry tyrant” who brought destruction to the Venezuelan people.

Even though Maduro won presidential elections in 2018, many international observers say that the entire process was rigged in his favor. Maduro had banned several political parties from participating in the election, thereby ensuring that he alone won. Calls for a repeat election have been snubbed by the Maduro administration as a “violation of the people’s voice.”

China disregards American’s sanctions on Venezuela and extends loans on very generous terms. Beijing has apparently invested close to US$60 billion in Venezuela with no strings attached. This has effectively given Maduro the money power to continue his oppressive rule. In addition, the Chinese government has sold weapons worth over US$615 million in the past decade. This includes conventional weapons systems as well as equipment to help the administration crush large-scale protests. Most of the weapons went to the “Bolivarian National Guard,” which is known for its violent actions against civilian protestors.

Pompeo’s statements have irked the Chinese government, which has tried to portray America as the “oppressor” despite the fact that the U.S. government wants free and fair elections to be conducted in Venezuela, whereas Beijing hopes to keep Maduro in power. “For some time, some U.S. politicians have been carrying the same version, the same script of slandering China all over the world, and fanning the flames and sowing discord everywhere… The words and deeds are despicable. But lies are lies, even if you say it a thousand times, they are still lies. Mr Pompeo, you can stop,” Lu Kang, Chinese foreign ministry spokesman, said in a statement (Business Standard).

Maduro has ordered almost 1 million people to join the National Bolivarian Militia, anticipating a military attack from the U.S. and two Latin American nations, Brazil and Colombia. The militia is part of the National Bolivarian Armed Forces (FANB) that Maduro has brought under his command. Reports suggest that the U.S. may be forced to opt for armed attack if Russia and China continue to support the Maduro regime and the condition in Venezuela worsens.

John Bolton, White House national security adviser, was very worried that Maduro was bolstering his army, indicating that the South American leader has no plans to allow a proper election to be conducted in the country. “Maduro is undermining the constitutional duty of the Venezuelan military by unilaterally expanding the untrained and undisciplined armed militia. He does not trust the FANB, which must exist to protect the people of Venezuela,” he said in a tweet.

The U.S. administration has warned Russia to abstain from providing any military support to the Maduro regime. However, Moscow has neglected the request and actually sent military specialists to Venezuela last month.