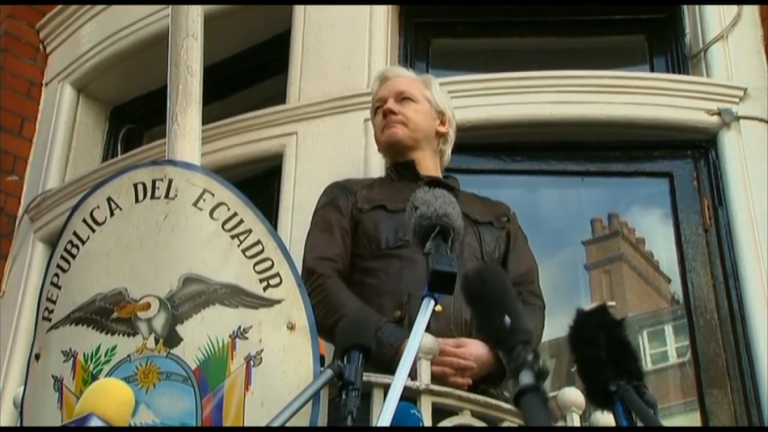 On April 11, British police entered the Ecuadorian embassy in London and arrested Julian Assange, who has been living there for the past seven years. (Image: Screenshot / YouTube)

On April 11, British police entered the Ecuadorian embassy in London and arrested Julian Assange, who has been living there for the past seven years. The arrest paves the way for his extradition to the U.S. where Assange has been charged with conspiracy to commit computer intrusion.

Assange and the Left

Assange, the founder of Wikileaks, became a much-hated figure among U.S. intelligence agencies in 2010 after he published classified documents related to the Iraq and Afghanistan wars during the George W. Bush era of “compassionate conservatism.” The documents were provided to Assange by Chelsea Manning, a former U.S. soldier. The U.S. government launched a criminal investigation into the matter. In November 2010, Assange was accused of sexual assault in Sweden, something he claimed was a fabrication intended to get him extradited to the United States. He left Sweden and arrived in the UK where he was arrested in December. When given bail for 10 days, Assange quickly sought asylum at the Ecuadorian embassy, where he remained cooped up until his recent arrest.

Initially, the American Left lauded Assange as a hero, the lone rebel who exposed the evils of the American government in the Middle East. As several more documents of secret military information were published, Assange became a cult figure among the Left. However, all that came crashing down in 2016 when WikiLeaks published a series of documents, including emails, from the Democratic National Committee and presidential hopeful Hillary Clinton’s campaign manager John Podesta.

The emails put Clinton in an embarrassing position and the leaked documents became a major issue during the U.S. presidential campaign. Her supporters had to watch their presidential hopeful become unpopular and eventually lose to Donald Trump. This incident quickly made Assange “enemy number one” for the Left.

They accused Assange of being a Russian spy who worked to interfere with the American elections. Clinton’s supporters were the ones who celebrated the most when Assange was arrested recently. “There are many cultists on this site, but the Assange cultists are the worst. Assange was the agent of a proto-fascist state, Russia, to undermine democracy. That is fascist behavior.  Anyone on the left should abhor what he did. Not celebrate it,” Neera Tanden, who used to be an advisor to Clinton, said in a tweet.

The British government was able to arrest Assange after the Ecuadorian government withdrew his asylum status. He is said to have played a role in leaking a set of documents that incriminate the President of Ecuador, Lenín Moreno, in a corruption scandal. WikiLeaks denied any involvement in the leak and accused Ecuador of using the incident as a pretext to hand Assange over to Britain.

Prosecutors from Sweden have announced that the victims of the alleged sexual assault wished to reopen the investigation. However, experts suggest that this would be difficult since almost 10 years have passed since it was supposed to have occurred. Not only would the testimony weaken with time, but the statute of limitation would also pose a problem.