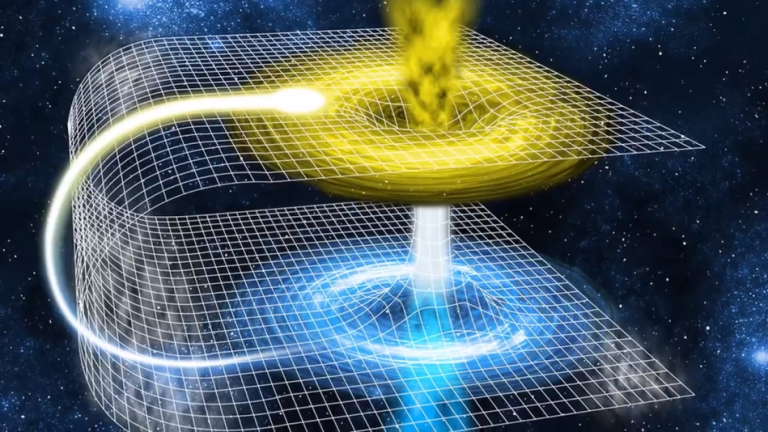 Ever since the idea of a wormhole was first introduced, scientists and the public alike have always wondered whether traveling through them would be possible. (Image: Screenshot / YouTube)

Ever since the idea of a wormhole was first introduced, scientists and the public alike have always wondered whether traveling through them would be possible. Since wormholes connect two points in space, they were theorized to be a speedy way to traverse galaxies. But Daniel Jafferis, a physicist from Harvard University says that even though traveling through wormholes is possible, it would be incredibly slow.

“It takes longer to get through these wormholes than to go directly, so they are not very useful for space travel… The real import of this work is in its relation to the black hole information problem and the connections between gravity and quantum mechanics,” he said in a statement (Phys.Org). Jafferis made the findings in collaboration with Ping Gao from Harvard and Aron Wall from Stanford.

They developed the new theory after Jafferis started pondering two black holes that were entangled on a quantum level. Recently, he presented the findings at the 2019 American Physical Society Meeting in Denver. Jafferis and his associates used quantum field theory tools to show that wormholes would be a longer path between two points. He believes that their theory will be helpful in unraveling the mysteries of quantum gravity and gauge/gravity correspondence.

Despite Jafferis’ claim, most scientists still see wormholes as a potential way for speedy space travel. Movies like Interstellar have planted the idea into the public consciousness that wormholes may enable us to even travel through time. Wormhole travel comes with its own set of uncertainties. No one is sure whether a ship that is sent through a wormhole will even reach its intended destination. The ship might end up in a completely different galaxy or right in the middle of a sun. It might even end up in a completely different time, either past or future.

Even with these risks, scientists continue to study the possibility of wormhole travel due to its immense potential. If wormhole travel ends up helping us traverse vast distances in a small amount of time, such a discovery would significantly alter the course of human history. In 2015, a group of Spanish researchers even created a tiny magnetic wormhole for the first time in human history. A magnetic field traveled invisibly between two regions of space through this wormhole.

The Pentagon and wormholes

In January this year, a document made public in response to a Freedom of Information Act (FOIA) request revealed that the Department of Defense ran a program in the late 2000s that compiled research in areas like wormhole travel. The Defense Intelligence Agency (DIA) wanted to explore the possibility of wormhole travel and stargates.

However, the report clearly stated that the U.S. government wouldn’t be using wormholes for travel for a long time since research on the subject was still in its early stages. “The progress of science and technology is rapid, but highly dependent on adequate and sustain[ed] focus, effort, and support… On this basis, it is possible that a traversable wormhole can be demonstrated in the laboratory as long as there is a focused, sustained level of long-term research support,” researchers of the report wrote (The Verge).

The FOIA response document listed 38 research titles pursued by the DIA that included subjects like invisibility cloaking, positron aerospace propulsion, extracting energy from the quantum vacuum, quantum computing, and so on.