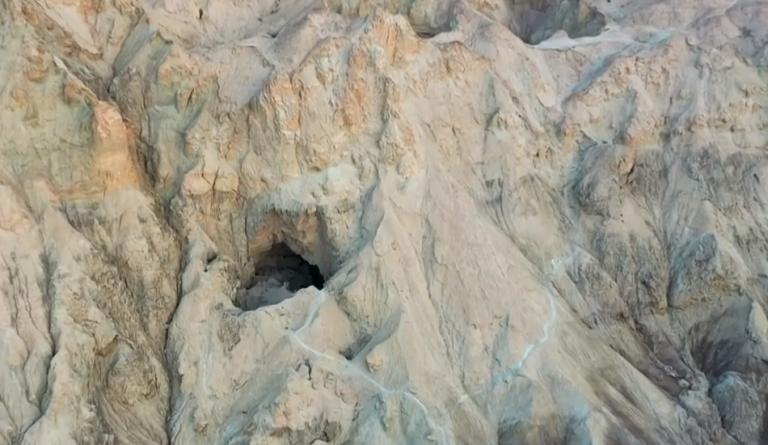 Researchers from Israel have recently discovered a network of passageways that have been dubbed the longest salt cave in the world. (Image: via Nspirement)

Researchers from Israel have recently discovered a network of passageways that have been dubbed the longest salt cave in the world. Named the Malham Cave, its current length is estimated to be 6 miles, which puts it far ahead of Iran’s Namakdan salt cave, which has a length of 3.6 miles. A survey of the Malham cave was led by the Hebrew University (HU) in Jerusalem.

Salt caves are a rare geological feature. As such, to find one as long as the Malham Cave is quite significant. Their rarity arises from the fact that large salt deposits usually do not exist for long on the surface as they are very water soluble. This is one of the reasons why such caves are typically found in arid regions like the Dead Sea. Being located at one of the lowest points on Earth, these caves remain too salty to support any type of animal life.

The Dead Sea was formed millions of years ago, during which time the depression was successively flooded with thick salt layers. “The salt layers are squeezed out from the sub-surface, where they are deposited a few kilometres underground, and while being squeezed out they form a mountain, which is rising still today, at a rate of about one centimetre per year,” Amos Frumkin, an HU geologist who has studied the cave for decades, said to The Guardian.

As it is so long, mapping the Malham Cave was no easy task. The researchers and about 80 volunteers spent almost 1,500 days measuring and mapping recesses of the caverns. When wood fragments were found inside the cave, researchers radiocarbon dated them and came to know that the cave was around 7,000 years old, which is young when compared to other caves.

“The reason why it’s so young is because it’s made of salt… Limestone caves are much slower to form. They are usually much older. But this one is developing very fast so it’s one of the youngest caves in the world… Because the salt is so soluble, that means that every change in the climate leaves its mark in the cave… If there is more water, more rainfall, the cave is enlarged, and Dead Sea level changes, and this makes a huge difference in the morphology of the cave,” Frumkin said in a statement (Stuff).

Exposure to salt caves is said to be therapeutic. In fact, man-made salt caves are now a growing trend across the United States. Mostly located in spa-like settings, these caves promise several health benefits thanks to the dry salt that is ground and pumped into the air. The temperature of the room is typically set at 70°F. All you have to do is to relax and breathe in the refined air. So how does exposing oneself to this therapy help?

“It follows with sodium chloride being an integral part of the body’s physiology and dealing with homeostasis and health… Saline in the lungs is key to eliminating toxins that we either inhale or otherwise come into contact with, and salt allows the body to excrete impurities through ion exchange,” Dr. R. Richard Leinhardt, an ENT facial plastic surgeon in New York City, said to U.S. News & World Report.

Regular exposure to salt caves can lead to healthy skin. Since Himalayan salt is found in most caves and is known to contain more than 84 minerals, your body will also be nourished as it absorbs the salt. The anti-inflammatory and anti-bacterial nature of the salt also helps in dealing with issues like psoriasis and eczema.