One Man’s Karma for Destroying a Buddha Statue 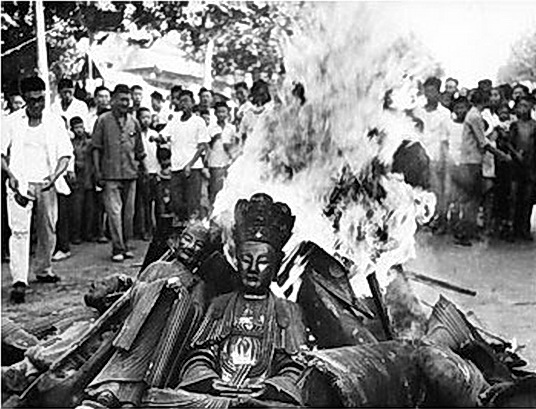 From the moment the Chinese Communist Party was established, it advocated atheism. This was especially true during the Cultural Revolution, when numerous Buddhist temples, Taoist shrines, churches, and other places of worship were destroyed, while countless statues and religious relics were smashed and burned. However, those who were influenced by the Party culture to perform such acts and show disrespect to the Buddhas and gods often experienced unfortunate consequences. Here is one such story.

The man who walks while kowtowing

In the northern part of Ji County, Shandong Province, there is a small village located nearby undulating mountains. When the storm of the Cultural Revolution struck in China, such small villages were not spared. This village had countless antiquities destroyed. Only a small temple and a plaque in the house of one family remained untouched because no one dared to destroy it.

Two young men in the village became so fanatical that they announced: “You guys don’t dare to defy the gods, but we do! We believe in the Communist Party, and we aren’t afraid of ghosts!” They then proceeded to smash the temple to pieces, including a sacred Buddha statue and ancestral tablets, which were thrown into a stream in front of the village. Once they finished, one of the men went home, while the other sat on a large rock by the stream and crossed his legs to rest.

The man who returned home was struck by a stomach ache. It was so painful that he rolled on the ground and felt his life was in danger. His mother saw him in pain, and because she had always believed in the Buddha, she asked what he had done that day, and she knew that his son was being punished because of his disrespect to the divine. She was distressed by her son’s karmic fate and became afraid that her son would lose his life because of his behavior. Even at the risk of being attacked by the other villagers, the mother walked and kneeled, and walked and kneeled, all the way from her home to the small temple, while praying and confessing her son’s sins to the Buddha. As she walked, her son’s pain slowly diminished, and as she approached the temple, the pain ceased.

Later, the young man realized he had experienced retribution for his actions. He then believed in the existence of the Buddha and regretted his act. Ever since then, he has respected and worshipped the Buddha.

In contrast, the man resting by the stream endured a tragic fate. After he had enough rest, he stood up and then suddenly fell to the ground. Struggling to get back up, he found that his legs were numb and contorted. He remained in this position for the rest of his life and had to move with a pair of walking sticks. This eventually caused his head to droop forward, bringing severe back pain. Everyone in town called him “the man who walks while kowtowing.”

Because he listened to the lies of the CCP and atheism, his sins caused him to suffer for a lifetime. The man lived to his seventies and recently died. For decades, his strange posture and slow walking served to warn people of the dangers of disrespect and blasphemy.

Translated by Judy and edited by Derek Padula