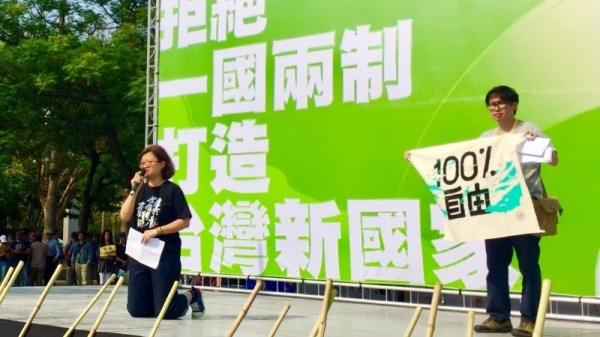 Zhong Huizhen kneels down and pleads to the Taiwanese people to awaken to what is happening today in Hong Kong. (Image: Free Times)

On April 7, during a rally to protest China’s framework to govern Taiwan under it’s “One Country, Two Systems” policy, Zhong Huizhen knelt down and pleaded with the Taiwanese people to awaken to what is happening in Hong Kong today. Her words touched many people.

There are concerns that Zhong (who immigrated to Taiwan from Hong Kong) may now be unable to return to Hong Kong; however, she said that she has no regrets. According to Taiwan media reports, Zhong emigrated to Taiwan last year and settled in Tainan and set up a restaurant business. Zhong was active in human rights and the political development of Hong Kong.

During the rally, while delivering a speech, Zhong knelt down and expressed her concerns for the future of Hong Kong and Taiwan. She told the crowd: “I came to Taiwan with the spirit of the umbrella revolution and not to rebel against Hong Kong. I came to Taiwan with a mission. I thought to myself if my kneeling here can get even three votes, five votes, ten votes; it is still worth it.”

“I beg all of you not to let Taiwan become Hong Kong. I kneel down hoping that those who do not want to come out to vote are touched by my action.  Please exercise your vote, which can also speak out for the people of Hong Kong.”

Zhong said that she emigrated to Taiwan and hopes to stand with the Taiwanese people. She wants the Taiwanese to awaken to the reality that if it is reunified with China, there may be a second 228 incident.

Zhong wants those Taiwanese who support reunification to be awakened by the truth: “After the return of Hong Kong, an estimated 150 people immigrate to Hong Kong every day from the mainland. Hong Kong’s population will soon be overtaken by the mainlanders, and the standard of living in Hong Kong will deteriorate.”

“People in Taiwan today are dissatisfied with low wages as well as limited retirement benefits, health insurance, and other social issues.  When China uses these concerns to change Taiwan, the problems for Taiwan will become more serious.”

Zhong wants to send a message to the Taiwanese that the Chinese Communist Party’s promise to Taiwan of a one country, two systems framework is the same as the promise to Hong Kong. “See what has happened to Hong Kong? Their promises are empty.”

Zhong pleaded with the Taiwanese not to be misled by China into thinking that reunification can bring them prosperity: “You all must recognize that the enemy is the Chinese Communist Party. Use your votes to support Taiwan for democracy and freedom and there will also be some hope for Hong Kong.”