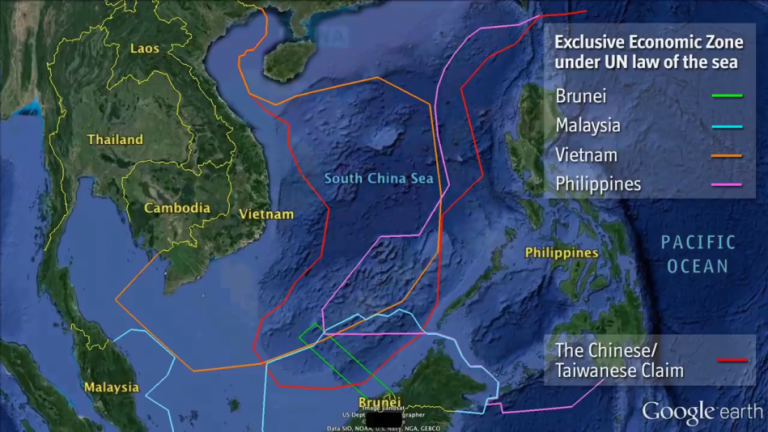 In a rare move, the government of the Phillipines has rebuked China for their increased patrols in the disputed Sandy Cay region of the South China Sea. (Image: Screenshot / YouTube)

The government of the Philippines has been going soft on China’s military adventures in the South China Sea because of Beijing’s investment proposals. But in a rare move, the administration has rebuked China for their increased patrols in the disputed Sandy Cay region, claiming they are an illegal activity and has promised to take “appropriate action.”

Sandy Cay is located close to an island known as Pag-asa, which is owned by the Philippines. According to the country’s military, they observed around 200 Chinese vessels monitoring the region between January and March. With Sandy Cay being a disputed region that both nations claim as their own, the Philippines government seems to have decided that keeping silent on the issue might eventually weigh on its sovereignty.

“The presence of Chinese vessels near and around Pag-asa and other maritime features … is illegal… Such actions are a clear violation of Philippine sovereignty, sovereign rights, and jurisdiction as defined under international law… We call on concerned parties to desist from any action and activity that contravenes the ASEAN-China Declaration on the Conduct of Parties in the South China Sea as these generate tension, mistrust, and uncertainty, and threaten regional peace and stability,” the Philippines Department of Foreign Affairs said in a statement (Navy Times).

Sandy Cay is a chain of three sandbars that have just emerged over the past few years. It lies between the Philippine-controlled Pag-asa and China’s man-made island, Subi. Since 2017, Chinese boats have swarmed the Sandy Cay region. An attempt by the Philippines to occupy one of the sandbars was strongly criticized by China in the same year. As a result, the Philippines government had to stop construction plans on the sandbar.

Given that his country has previously stayed away from the island on China’s demands, Philippine President Rodrigo Duterte cannot allow China to establish a base on the sandbar as it would completely erode their claims over it. Last November, Duterte and Xi Jinping had apparently agreed to practice self-restraint in disputed regions of the South China Sea. But China seems to be disregarding the arrangement with its recent moves in the area. The Department of Foreign Affairs has lodged diplomatic protests with Chinese officials.

The Chinese Navy recently held a military parade to mark its 70th anniversary. About 32 ships and 39 aircraft were on display, aimed at projecting Beijing’s might and ability to control the waters of the South China Sea. The country’s new guided-missile destroyer, the Nanchang, along with the Liaoning aircraft carrier, was exhibited at the event.

Meanwhile, the U.S. Coast Guard sent one of its cutters to join the American Navy’s destroyer Curtis Wilbur for a transit through the Strait of Formosa. This was done under the Navy’s “Freedom of Navigation” campaign aimed at sending Beijing a message that the South China Sea is open for everyone.

“The U.S. will continue to fly, sail, and operate anywhere international law allows… The ship’s transit through the Taiwan Strait demonstrates the U.S. commitment to a free and open Indo-Pacific,” Clayton Doss, U.S. 7th Fleet spokesman commander, said in a statement (The Maritime Executive).

Chinese officials asked the U.S. to “not interfere” in the region and accept Beijing’s authority in the area. This is the third time in three months that the U.S. Navy has engaged in transiting the Strait of Formosa. The activity is also seen as a signal of American support for the island nation of Taiwan.