China Looking for Ways to Solve Its Enormous Plastic Problem 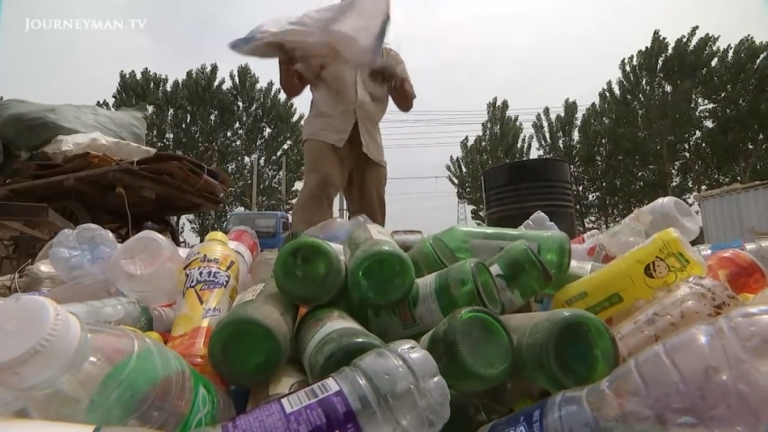 With plastic pollution becoming a major problem in China, the government seems to have awakened to the issue, framing policies to limit the menace. (Image: Screenshot / YouTube)

With plastic pollution becoming a major problem in China, the government seems to have awakened to the issue, framing policies to limit the menace. Globally, less than a fifth of the world’s plastic is recycled. As far as China is concerned, it only recycles about 25 percent. The country accounts for nearly 29 percent of global plastic pollution.

In 2017, China passed a law that blocked the import of recyclable plastics from countries like America. While this has been a positive step in reducing plastic waste buildup in the country, it clearly won’t help China deal with the waste produced domestically.

The state has declared that it would launch 100 recycling bases by the end of 2020. Half of the bases would handle bulk solid waste while the remaining ones will deal with industrial waste. “Large volumes of solid waste are already impacting and restricting the high-quality development of the industrial economy,” the Ministry of Industry and Information Technology said in a policy document (Reuters).

In January this year, the Ministry of Ecology and Environment announced a scheme to establish 10 zero-waste cities. Purchasing habits of citizens and the recycling infrastructure will be overhauled so that waste is kept to a bare minimum. People will be encouraged to live lives in a way that do not harm the environment. If these 10 cities produce the expected results and show a significant drop in waste, the government plans on expanding the project to other cities starting next year.

However, there is a big problem — plastic waste in rural regions. “Plastic waste that has no value for recycling is either burned directly or dumped in waterways and eventually ends up in the sea. This is very common in China’s rural areas, where there is no waste management in place,” Chen Liwen, a researcher with the environmental group Nature University in Beijing, said to South China Morning Post.

Back in 2008, China banned marketplaces from providing customers with free plastic bags. Over the next seven years, the use of such bags in shopping centers fell by over 60 percent. With new policies, the state hopes to reduce plastic waste even more. It is estimated that the Chinese recycling industry might create 40 million additional new jobs by 2030.

Plastic waste crisis in the U.S.

While cutting back on plastic waste imports from the U.S. has been beneficial for China, it has not gone down well in America. The United States sent almost 693 million metric tons of plastic waste to China in the 12 months prior to the ban. Now, the U.S. is facing a plastic waste crisis.

“We’re seeing an increase in landfilling, and because most states have fees for landfills, that’s creating an additional expense [for municipalities]. Plastics went from [selling for] like $300 a ton at their peak to now where you almost have to pay to get rid of them. Municipalities are cutting back on their recycling and what they will pick up; some places have stopped recycling altogether,” Kate O’Neill, an associate professor in the Department of Environmental Science, Policy and Management at UC Berkeley, said to Vox.

Abrupt loss of the Chinese recycling market has disrupted supply chains. The U.S. is searching for new countries to which it can export its plastic waste, with Malaysia topping the list as a favorable destination. Plastic waste exports to Malaysia doubled in the first seven months of last year. However, the Malaysian government seems to have taken a stricter stance against importing plastic waste, again leaving the U.S. reeling. Over the next few years, experts hope that new recycling plants will be set up in the country that will ensure that America is able to deal with its plastic waste on its own.