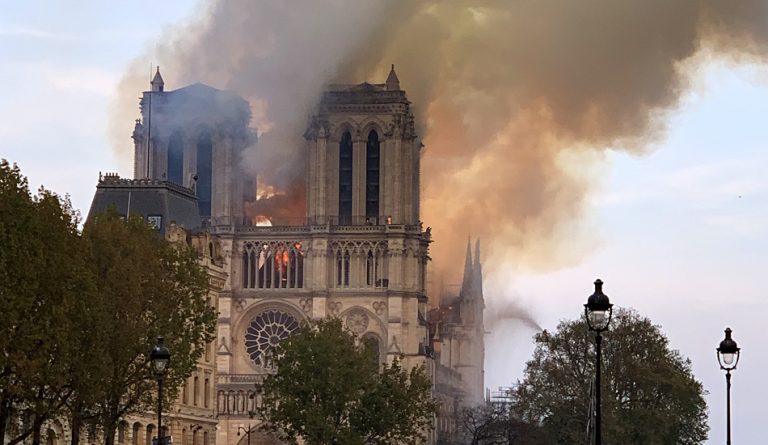 The fire at Notre Dame cathedral has raised suspicions that the historic monument may have been specifically targeted. (Image: Milliped via wikimedia CC BY-SA 4.0)

On March 17, St. Sulpice Church in Paris was targeted by an arsonist resulting in damage to its basilica. This month, the famed Notre Dame cathedral burned down in a fire, raising suspicions that someone might have targeted the historic monument. However, the curate of the church, Jean-Loup Lacroix, has warned against linking the two events.

“As far as [the fire at] Saint-Sulpice, things are quite clear: It was not an anti-religious act. The fire had been started by a poor man who was homeless, according to the preliminary investigation… [Regarding the Notre Dame fire], do not believe the conspiracy and demand a culprit at all costs… These fires simply remind us that we are fragile, and that many things can collapse. Stones are important, but so are hearts,” Lacroix said in a statement (Newsweek).

But despite Lacroix’s impassioned plea, the controversy surrounding Notre Dame has remained strong. Some suspect that the church was intentionally burned down by miscreants from the Middle-East, but that the government is hiding the truth in order to “avoid conflict.” Reports say that the fire was caused by an electrical short circuit. People from the media, like Fox Business host Lou Dobbs, have expressed their suspicions about the incident.

“One thing authorities are ruling out, however, within just a matter of hours, arson… That was a decision made within hours. It sounds like a different kind of decision… Perhaps a political decision rather than one based on careful investigation of the facts… In a single week last month, 12 churches were vandalized, including a fire deliberately set at a church also located in Paris. This is context, this is not speculation, this is the situation right now in France and the recent history of what has happened to Catholic churches throughout the nation,” Dobbs said in a statement (Newsweek).

Last year, almost 875 Catholic churches in the country were vandalized. The “Observatory of Intolerance and Discrimination Against Christians,” a Vienna-based group, has accused feminists and other anti-religious groups for much of the vandalism. While most people were filled with sadness and anger at the burning of Notre Dame, those with more left-leaning ideologies were actually expressing delight at the incident.

Patricio del Rea, an architecture historian at Harvard University, called the event an “act of liberation.” (Rolling Stone). A journalist from Sweden captioned an image of the burning church with the phrase “at last.” Another media person tweeted that the Notre Dame burning was cosmic karma for colonization.

Lilian Thuram, a former French footballer, tried to turn the issue into a racist one by stating that the burning of Notre Dame got greater coverage and emotional response than the deaths of African migrants trying to cross the Mediterranean and enter France illegally.

Meanwhile, jihadists linked to ISIS have been sharing the image of a blazing Notre Dame through propaganda channels with a caption “Wait for the next.” Many speculate that this is a clear indication that Islamic terrorists were behind the attack. Another poster warned Christians: “It’s time to say goodbye to your oratory polytheism.” Since ISIS has not officially claimed responsibility for the burning, the Notre Dame event continues to be officially presented as a “non-terrorist” incident.