The Shocking Secret Hidden in a Chinese Girl’s Backpack 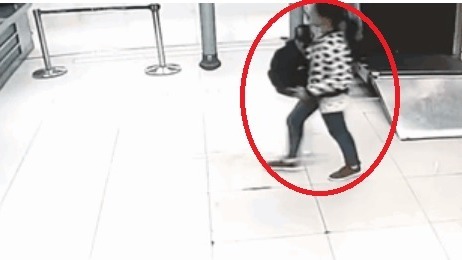 The bulging backpack the girl was carrying aroused the suspicion of customs officers. (Image: Secret China)

A 12-year-old girl from Shenzhen, China, was preparing to enter Hong Kong. She was calm and composed under the surveillance camera and looked just like other cross-border schoolchildren. However, the bulging backpack the girl was carrying with her aroused the suspicion of customs officers. After an inspection, the officials found 142 tubes of blood samples in her bag weighing a total of 1.5 kg.

Lab analysis later confirmed that these were human blood samples from pregnant women. Each blood sample was labeled with the name, the number of weeks of pregnancy, the number of the pregnancy of the woman, and came with a Maternal Y Chromosome Gene Detection Application Form.

It turned out that this is a vicious cycle related to the blood sample testing to identify male fetuses for parents wanting baby boys. As the girl later admitted, as long as she brought the blood samples to Hong Kong, someone will give her courier fees, and her responsibility would end.

At present, without a good medical reason, fetal gender identification is prohibited in China, but Hong Kong can still legally carry out such tests. Some people will abort a female fetus in advance in order to try for a boy.

The blood test comes with a hidden killing agenda. A woman in Zhejiang aborted her female fetus after receiving the results from the blood test. Having a boy is the custom, so finding out the sex of the fetus early on, and then taking the necessary steps based on the results, has become an unwritten rule for prospective mothers. What parents care about is to determine the gender at the best time to “get rid of the girls and keep the boys.” Some police officers told reporters that when demand is strong, a courier can make up to 330,000 yuan (US$50,000). When the parents’ wishes meet the profit needs of the middleman, no one will care if the deal is legal or not.

We don’t know how many innocent baby girls have been aborted in the mother’s womb. After searching for 51 relevant cases from 2012 to 2017, some reporters found that among the hundreds of people who accepted the blood test, 64 mothers chose to destroy the unborn fetuses

In addition to the “pre-natal” hands-on approach to the disappearance of baby girls, there are “post-natal disappearances.” After a search on the Internet, the perpetrators can be the girl’s father, mother, grandmother, or other family members and the reasons are surprisingly consistent — a daughter is useless, is loss-making merchandise, so it is not a big deal to get rid of her.

Among the people born after 1994, the gender ratio in China has exceeded 110, and among the young people of marriageable age, 10 out of every 100 Chinese men cannot find a match. The countryside is precisely the area where the phenomenon of “ blood tests” was most rampant. Over time, it has formed a unique social and cultural phenomenon known as “the bachelor village.”

In 2016, in the Paifang Village of Guiyang City, Guizhou Province, there were 2,249 people in the village, of whom 282 were bachelors, accounting for about one-fifth of the total number of men. Jiaocun Town in Gansu Province is also a town with a small number of men and women. According to the media, women act like royalty there. One young woman, after looking at 30 young men every day, can walk away easily if she feels those young men are not good enough or the bride’s gift is not sufficient.

The unbalanced ratio of men and women hides a series of social unrest factors. In such an environment, it is not uncommon to choose illegal ways — such as human trafficking, sexual assaults, and violence — when it reaches the extreme. When we connect the gender imbalance, the bachelor village, and other issues with the social phenomenon of “blood testing for unborn baby boys,” what we get is deep cultural anxiety.